The major stock indices were up on Monday, with the Dow Jones Industrial Average 0.26% higher by 12:10 p.m. EST. With a flood of quarterly reports set to begin in earnest soon, the market appears optimistic.

Shares of Boeing (NYSE:BA) managed a solid gain as a new CEO officially took the helm of the troubled company. Fellow blue-chip stock Walmart (NYSE:WMT) moved in the opposite direction, although the retailer's plans to deploy robots to its stores could help lower costs and boost profits in the long run.

Boeing's new CEO has a tough task ahead

The grounding of the 737 Max following two fatal crashes, and the subsequent drama around getting the plane back in the sky, is doing damage to Boeing's reputation. It will be the job of incoming CEO Dave Calhoun to keep that damage to a minimum.

Calhoun takes over at Boeing today, following the firing of former CEO Dennis Muilenburg in December. His task is twofold: Get the 737 Max flying again and rebuild Boeing's image.

The 737 Max may take longer to return to the air after Boeing dropped its opposition to simulator training for 737 Max pilots. Calhoun was reportedly behind that decision. Calhoun also pushed for the release of embarrassing and troubling internal communications last week. While those communications have damaged Boeing's image, they would have likely done far more damage if they had leaked down the road.

Boeing's first quarterly report under Calhoun will come on Jan. 29. The company is expected to report a massive accounting charge, to the tune of $6 billion according to analysts at Cowen & Co, related to the 737 Max crisis. At the very least, the charge will wipe the accounting slate clean for Calhoun as he tries to turn the company around.

Shares of Boeing were up 1% by early Monday afternoon. The stock is down about 25% from its 52-week high.

Walmart expands use of robots in stores

Amazon isn't the only retailer making extensive use of robots to boost efficiency. Bloomberg reported on Monday that Walmart plans to greatly expand its use of robots that scan shelves in its stores. Made by Bossa Nova Robotics, the six-foot-tall robots use 15 cameras each to detect out-of-stock items. 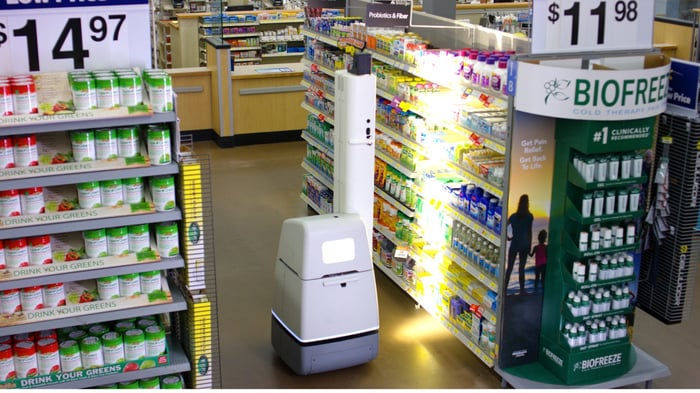 Whenever a customer finds an item out of stock, not only does Walmart lose a sale, but it risks losing that customer as well. No one likes having their shopping trip derailed by empty shelves. The shelf-scanning robots, which will be added to 650 additional Walmart stores by the end of the summer, aim to solve that problem.

Taking inventory can be done twice a day with the robots, a process that can take as long as two weeks normally. That speedup can reduce out-of-stock items while potentially reducing store-level costs.

Walmart will report its fourth-quarter results on Feb. 18. One analyst has already warned about weaker-than-expected holiday sales. Shares of Walmart were down 0.7% Monday, although they're up 22% over the past year.