Microsoft (NASDAQ:MSFT) stock failed to ride the Dow higher, possibly due to news that cloud computing rival Amazon.com (NASDAQ:AMZN) planned to file a motion to block it from working on the massive Joint Enterprise Defense Infrastructure (JEDI) government cloud contract.

Shares of JPMorgan were up 2.1% Tuesday morning after the megabank easily beat analyst expectations with its fourth-quarter results. Total revenue was $28.3 billion, up 8.4% year over year and $610 million higher than the average analyst estimate. 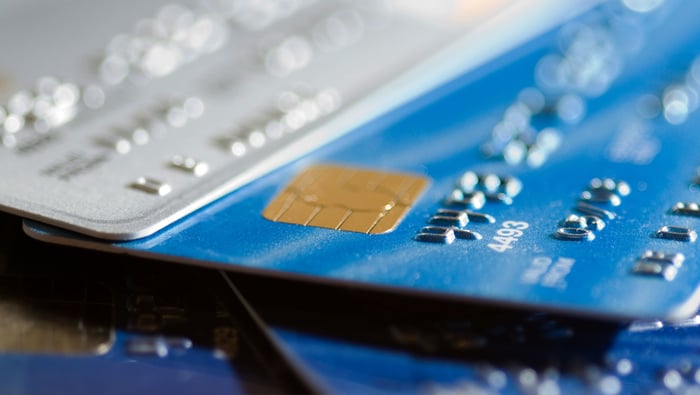 The corporate and investment bank segment was the star of the show, with revenue of $9.5 billion, up 31% year over year. Within that segment, markets and securities services revenue soared 55% to $6.1 billion, driven by 86% growth in fixed-income revenue.

The consumer and community banking segment produced $14 billion of revenue, up 2.5% year over year. Consumer and business banking was down slightly, as was home lending. But growth from card, merchant services, and auto more than offset that weakness.

JPMorgan reported earnings per share of $2.57, up from $1.98 in the prior-year period and $0.22 higher than analysts were expecting. A big jump in net income from the corporate and investment bank segment drove much of the earnings growth.

CEO Jamie Dimon discussed the economic environment in the earnings release: "While we face a continued high level of complex geopolitical issues, global growth stabilized, albeit at a lower level, and resolution of some trade issues helped support client and market activity toward the end of the year. The U.S. consumer continues to be in a strong position, and we see the benefits of this across our consumer businesses."

Including Tuesday's gain, shares of JPMorgan are up about 40% over the past year.

Microsoft has already started working on the $10 billion JEDI cloud contract from the Department of Defense, which it won last year despite Amazon being the favorite. Amazon has contended that the process was flawed due to bias from the Pentagon as well as attempts by President Trump to influence the decision.

Reuters reported on Tuesday that a court filing showed that Amazon will ask a judge to temporarily block Microsoft from working on the JEDI contract. The filing states that Amazon will file a motion for a temporary restraining order on Jan. 24, with a decision from a federal court coming on Feb. 11.

It's unclear how likely Amazon is to succeed in its quest to strip Microsoft of its JEDI win. While its indisputable that politics tinged the process, Microsoft's cloud business has grown into a fully capable alternative to Amazon Web Services. Recently, an analyst at Wedbush concluded that Microsoft would likely win the majority of upcoming major cloud deployments, based on talking to enterprise customers and partners.

One thing seems certain: The cloud infrastructure business is becoming more competitive. Microsoft is quickly gaining ground on market leader Amazon, and Alphabet's Google is reportedly aiming to become the No. 1 or No. 2 provider by 2023. A price war could be brewing, with the potential to reduce profitability across the industry.

Shares of Microsoft largely shook off the news, and were down about 0.1% Tuesday morning.