Please ensure Javascript is enabled for purposes of website accessibility
Log In Help Join The Motley Fool
Free Article Join Over 1 Million Premium Members And Get More In-Depth Stock Guidance and Research
By David Butler - Apr 10, 2020 at 11:33AM

The markets have found a little momentum since the coronavirus sell-off, but that doesn't mean the pain is over. Here are three strong stocks that seem safe.

Thus far, the market has held its own this week. Things like Steve Mnuchin speaking about a further $250 billion in aid for small businesses, oil price moves, and varying reports on the coronavirus in New York City have all had their effects.

While there are plenty of stocks to avoid right now, there are some strong picks offering nice additions to any good portfolio.

Financials may not be the hottest sector these days, but they offer some substantial value. JPMorgan Chase (JPM -2.48%) remains a solid long-term asset for any portfolio. The bank now carries a 4.29% yield. Finishing 2019 with earnings of $10.72 per share, the bank carries a trailing payout ratio of 27.7%.

JPMorgan Chase is a very efficient bank. Its return on equity (ROE) was 15% last year, a rate that far outpaces the industry average of 11.76%.

Over the 10-year period prior to the recent sell-off, JPMorgan Chase's shares beat the S&P 500 by 56%. Its annual net interest income growth has averaged 7.12% annualized over the past four years, bringing in $84 billion last year despite a low interest rate environment.

Annual net income growth has been even better, jumping 12.3% in 2019 to $36.23 billion. The year prior saw earnings growth of 33.14%. The value of these earnings has been amplified for shareholders, as the bank has worked to decrease its overall share count. Outstanding shares decreased 13.4% between 2015 and 2019.

Coronavirus fears have put a 33% dent in the stock over the last three months, providing a nice long-term buying opportunity. A recent announcement that the bank would be temporarily closing about 20% of its branches put a little more pressure on shares. While the largest U.S. bank by assets might feel some pain in the short term, it is still one of the best run in the business.  Warren Buffett has been a fan of the stock for a while, praising its returns on equity. My general view is if it's good enough for Buffett, it's good enough for me. 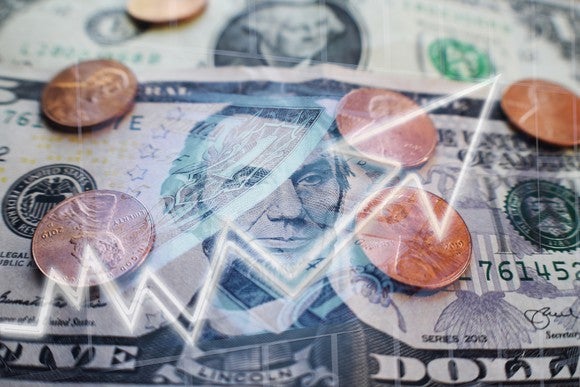 Thoughts and fears will immediately jump to how much pain airlines and aviation companies are experiencing right now, but Lockheed Martin (LMT 0.15%) is a different animal entirely.

Because the company does most of its business with the U.S. government, I don't see the checks stopping anytime soon. Lockheed Martin's backlog of orders is $144 billion. That gives us a picture of the revenue potential here that is much harder to see in other businesses.

This investment isn't overly complicated. Lockheed Martin posts consistent annual sales growth, averaging 10.29% per year since 2016. The gross income created off of 2019's $59.81 billion in revenue was $9.43 billion, giving the defense contractor a gross profit margin of 15.76% last year. Sporting a 199% return on equity, and earnings of $21.95 per diluted share, the company is solid.

Lockheed had been down over 30% since the beginning of the sell-off, but is starting to find momentum. Down only 2.27% over the last month, the defense stock is performing far better than the broader market.

This underscores investors' views that the company's revenue streams are relatively safe. The stock offers a decent price-to-earnings, carrying a valuation of times trailing P/E ratio of 17 times full year earnings. When looking at price-to-book of just under 33, the value isn't quite as appealing. That's the price you pay for a defense contractor's reliability.

Paying out $9.60 per year, Lockheed Martin's dividend represents 43.7% of the company's annual earnings. I consider that to be a pretty safe payout ratio. It leaves a lot of wiggle room should the current economic turmoil lead to some earnings disruption. Again, that earnings disruption seems much less likely for a defense contractor.

The Pentagon has gone so far as to say that it will ensure timely payments to contractors and that the "essential industry" should keep working. This included raising progress payments as a way to ensure that contractors maintained a healthy bit of cash. One of the many perks of investing in a defense contractor is that the government is usually on your side.

Microsoft (MSFT -1.39%) shares have done well versus many companies throughout the sell-off, up 4.58% over the last three months compared to the S&P 500's 17.95% decline. It also offers simple exposure to both old school tech, like software and personal computers, and the rising tide of cloud services.

In more recent years, we've watched Microsoft make more moves within cloud services. This area is certainly more and more prevalent these days, and the move seems like the right direction for Microsoft.

The company finished fiscal 2019 with $38 billion in cloud-based revenue, making it the largest commercial cloud service provider in the world. The ever-rising scope of tech seems destined to increase the demand for these types of services.

The short-term concern is what impact the COVID-19 outbreak has on Microsoft's supply chain. Like most tech companies, it has suppliers in Asia. The company warned back in February that the situation would likely cause a hit in sales for its PC business, which includes Windows software that is installed on an array of brands. With the shutdown here at home, there's pressure on PC sales in the U.S. as well.

The tech giant is making strides into a stronger 5G presence with its acquisition of Affirmed Networks. Affirmed is involved in the infrastructure side of 5G, and some have pointed out that it could work as a bridge between Microsoft's cloud business and the implementation of the new, faster network.

In the company's most recent earnings release, Microsoft carried over $8 billion in cash on the books and made $11.64 billion in net income. The balance sheet as a whole is very healthy, with over $110 billion in total equity.

There is very little reason for concern that the company will face any long-term issues from the current economic turmoil. Consumers and workers have been pressed into using computers and remote services for business even more than usual, thanks to the coronavirus. In a way, that really plays in Microsoft's favor.