Shares of YETI Holdings (NYSE:YETI) soared 134.4% in 2019, according to data from S&P Global Market Intelligence, as the outdoor lifestyle products company delivered surprisingly solid results throughout the year. 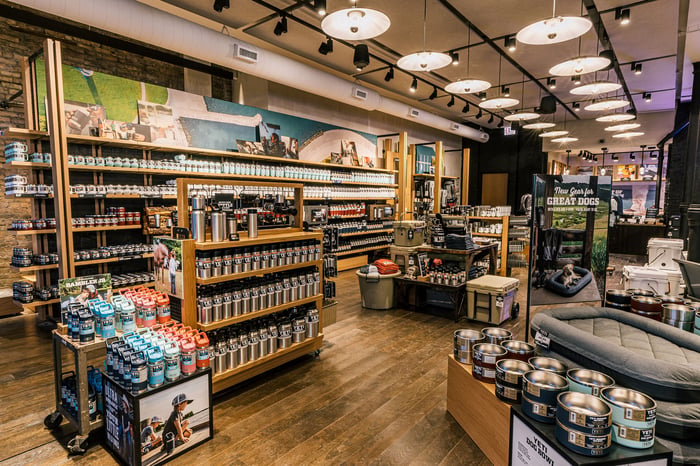 To be sure -- and keeping in mind YETI shares entered 2019 having fallen around 18% from their October 2018 initial public offering at $18 per share -- YETI stock went on to more than double by the end of March as investors celebrated the company's strong holiday-season results. Fourth-quarter net sales had climbed a strong 19% year over year to $241.2 million, while adjusted net income nearly quadrupled to $32 million, or $0.38 per share. Both the top and bottom lines were near the high ends of YETI's own financial guidance.

While YETI stock subsequently pulled back around 15% on the heels of its equally decent first-quarter report in May, the move seemed more indicative of traders taking profits than any underlying problem with YETI's business.

More recently in late October, shares behaved in a similar fashion following YETI's better-than-expected performance during its seasonally slow third quarter. Net sales jumped 17% to $229.1 million, fueled by a 21% increase in drinkware products (to $126.4 million) and supplemented by a 13% bump from its flagship cooler line and other equipment (to $97.8 million). And adjusted net income grew a healthy 24% to $0.30 per share, leaving YETI management comfortable increasing their full-year sales and earnings guidance.

YETI investors should get their next update on the company's progress when it releases fourth-quarter 2019 results in mid-February. All told, its most recent outlook calls for full-year sales growth of between 14.5% and 15%, translating to adjusted net income per share of between $1.12 and $1.14. Whether YETI lives up to those targets remains to be seen. But given its post-IPO decline leading into 2019, as well as its consistent outperformance through the first three quarters, the market had little choice but to bid up shares in response.