Please ensure Javascript is enabled for purposes of website accessibility
Log In Help Join The Motley Fool
Free Article Join Over 1 Million Premium Members And Get More In-Depth Stock Guidance and Research
By Luis Sanchez CFA - Jan 15, 2020 at 8:01AM

The video game industry is an exciting, fast-growing media market that has a lot of long-term potential. American investors are probably familiar with companies like Activision Blizzard and Electronic Arts, but Sea Limited (SE 3.60%) is probably not on most people's radar.

For the most part, Garena distributes game titles from third-party developers. Because Garena has widespread adoption in the Southeast Asian market, it has the exclusive license to distribute popular titles, including Call of Duty, League of Legends, FIFA Online, and Arena of Valor. The company also has a partnership with Tencent (TCEHY -1.38%) under which it gets a right of first refusal to distribute Tencent's popular mobile games from China. 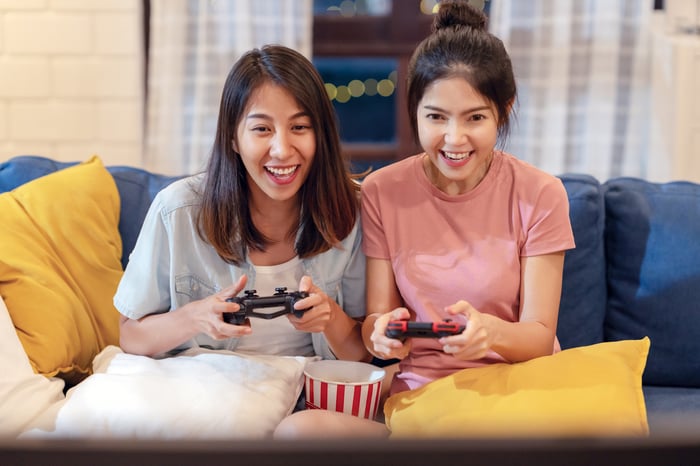 Being a regional game platform is a fine business, but in the last two years, Garena has transitioned to becoming an international game publisher as well. The company released its first self-published mobile game in 2017, called Free Fire, and this game has gone on to be a global success -- topping the Apple iOS charts as well as the Google Play store in Latin America and other parts of Asia. The game has had modest success in the United States.

Becoming a game publisher has a couple of interesting benefits. First, Garena is able to reach an audience outside of Southeast Asia. Second, Garena's largest expense in its gaming business is paying royalties to third-party developers; as a result, bringing game development in-house is more profitable for popular games. Also, as a distribution platform, Garena can unfairly advantage its own titles with promotions on its store. Practically speaking, this means prominently marketing its own titles at zero expense to quickly spark user adoption.

Sea's journey with its Garena platform from a regional platform to a successful global publisher has provided astounding financial results.

The table below shows that Sea's gaming division has more than doubled its revenue from 2016 to the last 12 months. Because Sea doesn't have to make royalty payments for its top game, Free Fire, it has also seen a nice bump in margins.

Will Garena be able to sustain its current 87% growth rate in the coming years? Probably not. The company recently launched a mobile version of Call of Duty and has some other interesting titles from Tencent planned, but these titles will be limited to the Southeast Asian markets and require royalty payments. Garena will need to build on its publishing success and release more games if it wants to sustain its current momentum.

Unprofitable due to growth investments

As impressive as the growth rate has been in video gaming, Shopee has been growing at an even greater rate. Last quarter, Shopee grew its year-over-year revenue by 261%. Shopee is on pace to be a $1 billion business by 2020. This is even more impressive when you consider that Shopee was founded less than five years ago.

However, Shopee is very unprofitable. The business segment carries a negative gross profit margin and burns a lot of cash due to Sea's ambitious growth plan, which involves offering free shipping and reduced fees to subsidize platform activity. The growth in this business is essentially financed by Sea's cash flow from its gaming segment, as well as its 2016 IPO.

The good news is that Sea's plan appears to be working. Shopee has become the top e-commerce platform in the Southeast Asian region, and Sea has successfully started to improve monetization of the platform without losing market share.

Sea's growth plan is ambitious and expensive, but it comes straight out of Amazon's playbook, which calls on aggressive investment to build a massive online platform.

Sea's rapid rise over the past 10 years has been nothing short of breathtaking. The company has built a global gaming business as well as a leading regional e-commerce platform. Given that the company operates in emerging markets and is unprofitable, this stock isn't for the faint of heart. But investors looking for strong growth should consider investing in Sea or at least keeping tabs on it to see where it goes from here.