Please ensure Javascript is enabled for purposes of website accessibility
Log In Help Join The Motley Fool
Free Article Join Over 1 Million Premium Members And Get More In-Depth Stock Guidance and Research
By Rich Smith - Jan 19, 2020 at 7:13AM

Don't look now, but Rocket Lab may have a new rival -- and SpaceX, too.

If you're a fan of the growing business of space exploration, you've probably heard of Virgin Galactic -- Sir Richard Branson's pioneering venture to send tourists to space aboard space planes, then land them back on Earth.

Now it's time for us to meet Britain's third entrant into the "rocket" market. For a change, this one will be a company that is not owned by Britain's best-known goateed billionaire: Orbex. 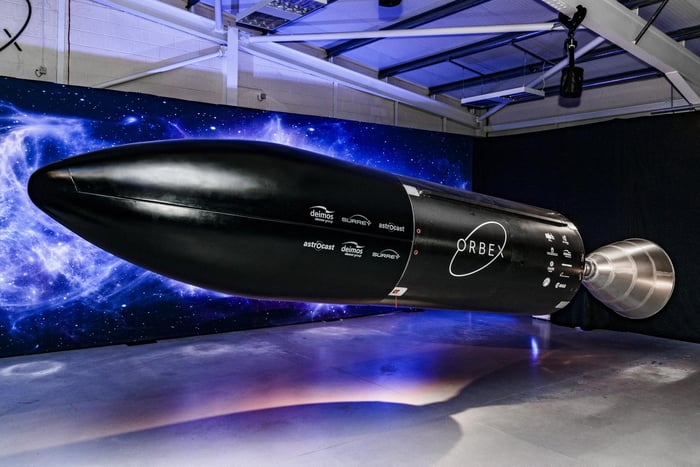 What is Orbex, you ask? Excellent question. I'd actually never heard of this one myself, but here's how Orbex introduces itself: "Founded in 2015, Orbex is a UK-based private, low-cost orbital launch services company, serving the needs of the small satellite industry."

Admittedly, Orbex hasn't actually served any of those needs (i.e., launched any satellites) just yet. But it has developed what it calls an "advanced, low carbon, high performance micro-launch" rocket dubbed "Orbex Prime," and even has a customer to fly on it.

Built with 3-D-printed engines and a carbon fiber-and-graphene body, Orbex Prime will utilize renewable "bio-propane" as its fuel of choice. The two-stage rocket will be designed to carry up to 150 kilograms of payload, contained within a 1.3-meter fairing, into Sun Synchronous Orbit. Perhaps most attractive of all, Orbex says its Prime rocket will be "80% reusable" (although it's somewhat vague on how it intends to recover its rockets for reuse, confiding only that it's "innovative").

Launching out of the UK's "first spaceport" in Sutherland, Scotland (assuming Scotland's still part of the UK by then -- and assuming Virgin Orbit doesn't build its spaceport first), Orbex and its Prime will be aiming to enter the same small satellite market that Virgin Orbit is targeting. But Virgin Orbit won't be the only competitor Orbex finds there.

Could Orbex be a contender?

Already, small rocket pioneer Rocket Lab has launched 10 successful small satellite missions into space utilizing its Electron rocket, and is lining up for an eleventh. At the same time, "big rocket" maker SpaceX is trying to clear the field of all rivals, offering bulk deliveries of dozens of small satellites at a time with a new Falcon 9 rideshare program, and pricing those launches at as little as $1 million per satellite.

Can Orbex match those prices? Can it match the $6.5 million price tag on a Rocket Lab Electron rocket, or even the mooted $10 million to $12 million cost of a Virgin Orbit launch? (Virgin Orbit, by the way, is offering payloads up to 500 kilograms, hence the higher price).

All of this remains to be seen. Earlier this week, Orbex announced a contract with Chantilly, Virginia-based "launch integrator" TriSept Corporation to carry multiple cubesats and microsatellites into orbit for customers who've booked rides through TriSept, in 2022. But no launch price was mentioned in the press release. Other mission(s) will precede this one, however, as Orbex is reportedly planning its inaugural launch to take place in late 2021. Potentially, as those other launches take place, word of the prices Orbex is charging for its launches may filter out.

If that proves to be the case, we'll be certain to update you as Orbex's prices -- and Orbex's competitive position among small launch providers -- firm up.