Please ensure Javascript is enabled for purposes of website accessibility
Log In Help Join The Motley Fool
Free Article Join Over 1 Million Premium Members And Get More In-Depth Stock Guidance and Research
By Harsh Chauhan - Jan 21, 2020 at 9:45AM

Which of these two high-flying chipmakers should you be buying right now?

Chipmakers NVIDIA (NVDA -2.51%) and Micron Technology (MU -0.72%) have been busy getting their businesses on track over the past year. While graphics card specialist NVIDIA is on the verge of a successful comeback thanks to the strength in its gaming and data center businesses, Micron Technology believes that a bottom is in sight as memory market conditions are improving.

Investors have been cheering the stocks of both chipmakers along the way. NVIDIA and Micron have remained top growth stocks over the past year, even though their top and bottom lines have been heading in the wrong direction. 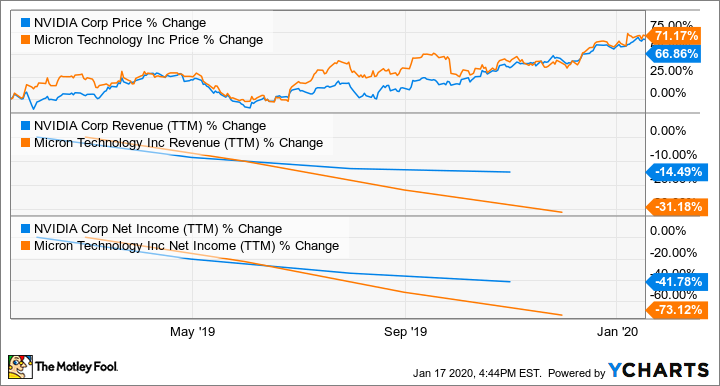 But it might not be long before investors start demanding actual results. And that makes one of these stocks a better bet than the other. 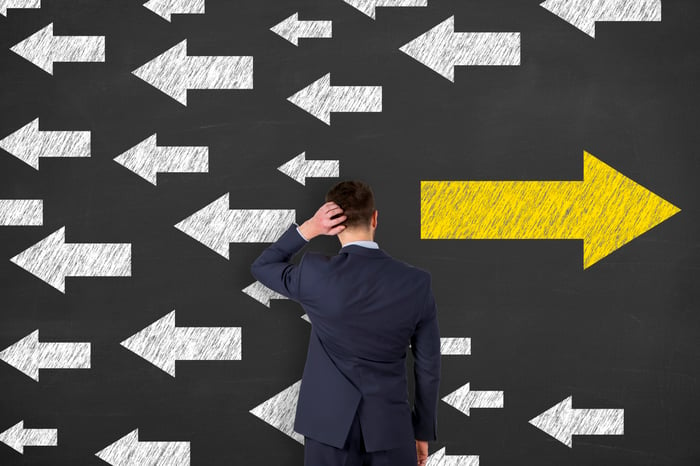 NVIDIA's top and bottom lines are ready to grow once again. The graphics specialist reported a 5% annual drop in revenue in the last reported quarter, and its net income dropped just 4%. The outlook for the current quarter indicates that NVIDIA is about to regain its mojo very soon.

The company anticipates $2.95 billion in revenue for the fourth quarter of fiscal 2020, which would be a 34% spike over the prior-year period's revenue of $2.2 billion. NVIDIA estimates a non-GAAP gross margin of 64.5% for the quarter -- a massive jump over the year-ago quarter's figure of 56%.

So NVIDIA looks all set to deliver a solid set of results next month. That should justify the faith investors have reposed in the stock over the past year.

But more importantly, NVIDIA's next earnings report could pave the way for stronger financial growth and more stock upside. That's because it enjoys a nice advantage in the gaming business -- which supplies 55% of its total revenue -- over its arch-rival.

The impressive thing to note here is that NVIDIA managed to make a comeback despite new cards from AMD. As AMD's cards were not powerful enough to challenge NVIDIA's top-of-the-line offerings, the latter cornered a bigger share of the sales pie. Jon Peddie Research reports that NVIDIA's quarter-over-quarter GPU shipments jumped 38.3%, while AMD recorded a much smaller increase of just 8.7%.

NVIDIA could sustain the impressive momentum in 2020 as more games with ray-tracing support are hitting the market.

AMD doesn't provide ray tracing just yet -- it plans to offer that feature in this year's cards. So NVIDIA has a head start as more gamers could be expected to buy its GPUs to take advantage of ray tracing technology and enjoy a more immersive gaming experience.

NVIDIA's data center business is another catalyst that could drive its financial performance this year. The company recorded double-digit sequential growth in the data center business last quarter, thanks to the increasing deployment of artificial intelligence (AI) applications in the cloud.

What's more, major Chinese tech players are already using NVIDIA chips in their data centers. This could give the chipmaker a nice shot in the arm as the country's data center market is expected to clock a compound annual growth rate of 12% through 2022, according to TechNavio.

In all, NVIDIA is sitting on a couple of solid catalysts that could drive its revenue and earnings higher this year. But can the same be said for Micron?

Unlike NVIDIA, Micron Technology has yet to provide solid proof of a turnaround.

In the recently reported first quarter of fiscal 2020, the memory specialist reported a 35% crash in its top line. The outlook wasn't very convincing either, as Micron expects revenue between $4.5 billion and $4.8 billion this quarter.

At the mid-point of the guidance range, Micron's top line could fall 20% as compared to the prior-year period.

While that's a major improvement over last quarter's performance, such a steep decline means that Micron still has some way to go before it actually stages a turnaround. Now, management believes that the company's financial performance will hit a bottom in the current quarter.

That claim could turn out to be true, as memory prices have started rebounding. Spot prices of dynamic random access memory (DRAM) started rising in December, paving the way for an increase in contract prices as well. DRAMeXchange estimates that DRAM prices could increase slightly in the first quarter of the year on the back of an increase in demand.

Memory industry leader Samsung has also given Micron a boost after revealing that the annual decline in its operating profit won't be as steep as originally expected. All these developments have been a tailwind for Micron stock of late.

DRAM demand is expected to outpace supply in 2020, as suppliers have been reducing their capital investments to keep a handle on output. So, the demand-supply dynamics of the memory market could create a positive memory pricing environment this year. That's why Micron stock has been riding high in recent months, as investors are probably anticipating that the heydays of 2017 could return this year.

But confirmation of a potential turnaround will arrive only in March, when Micron releases its fiscal second-quarter results. Until then, investors can only rely on third-party sources to get an idea of the memory industry's recovery.

But if the recovery isn't as strong as Micron anticipates, and it issues a disappointing outlook a couple of months later, investors could hit the panic button and the stock might tank.

By now, it is evident why NVIDIA looks like a better bet compared to Micron. The graphics specialist's turnaround is just a stone's throw away. It is in a dominant position in the gaming space, and is making strides in data centers.

Micron, on the other hand, is dependent on the memory market's fortunes. Though there have been signs of a turnaround, betting on Micron Technology stock over NVIDIA based on something which may or may not happen won't be a prudent bet. That's why buying NVIDIA stock looks like a good deal over Micron even though the former trades at 63 times trailing earnings.

Micron is much cheaper with a price-to-earnings ratio of 18. But NVIDIA is on track to deliver impressive top- and bottom-line growth -- and that justifies the premium.