Please ensure Javascript is enabled for purposes of website accessibility
Log In Help Join The Motley Fool
Free Article Join Over 1 Million Premium Members And Get More In-Depth Stock Guidance and Research
By Pearl Wang - Jan 24, 2020 at 10:15AM

However, Foot Locker's sales should get a boost from new product launches as well as ongoing strength in Nike's Jordan brand products. Beyonce's highly anticipated Ivy Park activewear collection just launched, and Foot Locker is a retail partner. Analysts say Ivy Park has the potential to reach over $1 billion in sales.

Given the company's sales growth potential, its conservative valuation, and its near-4% dividend yield, shares look compelling. 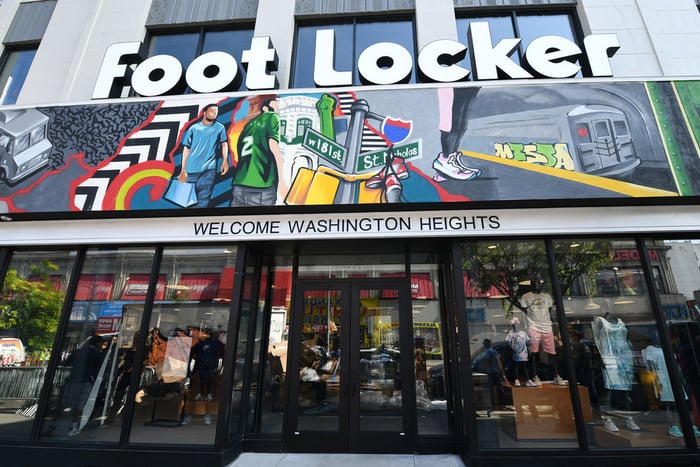 The company's non-GAAP (adjusted) earnings per share of $1.13 for the quarter ending November 2, 2019 came in ahead of consensus estimates for $1.08. This  followed a lackluster second-quarter earnings report that missed estimates. Third-quarter results were boosted by strength in the back-to-school season and direct-to-consumer segment. Foot Locker executives also said footwear performed well, citing strength in men's basketball and running shoes.

In 2020, the retailer has a number of initiatives aimed at increasing sales. It will also benefit from strength at Nike, which accounts for about 70% of Foot Locker's revenue.

Foot Locker will be one of the few retail partners for Beyonce's new highly anticipated Ivy Park Activewear collection collaboration with Adidas, which just launched. Ivy Park's first launch in 2016 -- in partnership with Top Shop -- sold out almost immediately. The 2020 Ivy Park venture with Adidas is also expected to boost revenue at the sportswear company. Analysts note that the U.S. athleisure market has a value of $69.2 billion in 2020, up from $54.3 billion in 2015.https://www.multivu.com/players/English/7739431-cotton-incorporated-lifestyle-monitor/

Analysts see the brand eventually surpassing sales of Adidas' other hugely popular celebrity collaboration, Kanye West's Yeezy line, which is estimated to have reached over $1.5 billion in sales last year. Ivy Park has tremendous expansion potential. Beyonce's social media clout is impressive -- she has more than 133 million social media followers on Instagram and is the sixth most-followed person in the world, according to BofA Securities.

The specialty retailer will also benefit from Nike's strong sales of its Jordan brand and new products, as Nike represents 70% of Foot Locker's merchandise purchases. During Nike's fiscal second quarter, its Jordan brand had its first-ever billion-dollar quarter. Former CEO Mark Parker (who transitioned into the executive chairman role) said of the line, "The marketplace is healthy, and in many cases, demand is exceeding supply." The international shoe company plans to expand the colors and styles of the Air Jordan 1.

Another driver of Foot Locker's sales growth is its investment in e-commerce initiatives. During the third quarter, direct-to-consumer sales produced the strongest gain of 11.4% vs. 4.7% for stores In fall 2019, the company invested in leading e-commerce and content platform NTWRK. Foot Locker plans to release exclusive products and original content through this partnership.

This ties in well with the specialty retailer's Power Stores initiative, which offers customers interactive experiences and opportunities to purchase coveted limited-edition sneakers. Currently, there are four Power Stores open in the U.S., but Foot Locker plans to open over 100 stores over the next five years. The newest Washington Heights Power Store is a retail partnership with Nike. This is the first time Nike's proprietary technology is part of another retailer's brick-and-mortar store. The concept will help drive increased foot traffic, as consumers want to visit stores that stand out with entertainment and interactive experiences.

Foot Locker's valuation is appealing at just 7.5 times forward earnings, far below the 20 times for the S&P 500 and the 25 times for the consumer discretionary sector. Given the growth drivers in place, and the near-4% dividend, the stock looks like a good buy, particularly on any pullbacks.