Please ensure Javascript is enabled for purposes of website accessibility
Log In Help Join The Motley Fool
Free Article Join Over 1 Million Premium Members And Get More In-Depth Stock Guidance and Research
By Daniel Miller - Jan 28, 2020 at 11:45AM

Despite missing top- and bottom-line estimates during the fourth quarter, management believes the company is on track to reignite growth.

Harley-Davidson's revenue declined 8.5% to $874.1 million in the fourth quarter, compared to the prior year, which failed to meet analysts' estimates of $922 million. Adjusted earnings checked in at $0.20 per share, which topped the prior year's $0.17 per share result but still failed to meet analysts' estimates of $0.24 per share. Harley-Davidson's shipments fell 7% to 40,454 units during the fourth quarter, slightly missing consensus estimates of 41,700 units. "Our performance in Q4 and the full year was in line with our expectations and indicative of increased business stability driven by the tremendous efforts of our employees and dealers," said Matt Levatich, president and chief executive officer of Harley-Davidson, in a press release. 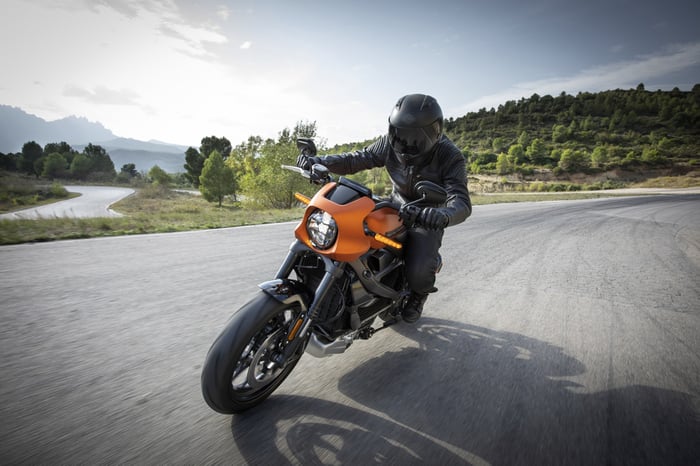 While fourth-quarter results left some investors disappointed, management believes the company is on track to reignite growth in 2021. In 2019 Harley-Davidson released its first electric motorcycle, LiveWire, and increased its international operations and reach. Management also sees 2020 as a critical year in the motorcycle maker's transformation as it tries to grow its consumer base of riders while also entering new segments to help offset the sales decline in its core products and segments. Stay tuned, the next two years will be important in determining the company's long-term ride and how bumpy it will be.