Please ensure Javascript is enabled for purposes of website accessibility
Log In Help Join The Motley Fool
Free Article Join Over 1 Million Premium Members And Get More In-Depth Stock Guidance and Research
By Billy Duberstein - Jan 30, 2020 at 7:00AM

The memory and storage specialist had a great 2019, and there’s a path for it to deliver much bigger gains to shareholders.

Micron Technology (MU 0.58%) is one of the most volatile tech stocks in the market. But could this very volatility be what helps turn it into a millionaire-maker investment for shareholders over the long term?

There are many cases of leading tech companies delivering results that would have made buy-and-hold investors huge fortunes from small initial investments. However, it would be natural to doubt that an established commodity-like stock such as Micron, which sells basic storage and memory components, could ever compound capital in the way that a software or tech platform company can.

Nevertheless, I can see a scenario in which Micron would do just that.

Broadly speaking, Micron has just about the most attractive product mix in the memory and storage space. It's one of only three major producers of dynamic random access memory (DRAM), one of six NAND flash storage producers, and one of only two companies making a new type of memory called 3D Xpoint, which is only just being commercialized. The only major gap in its storage technology portfolio is that it doesn't make hard disk drives, but those are an older (albeit cheaper) bulk storage solution, and NAND flash is displacing them in many applications.

As a business, manufacturing memory and storage products has both favorable and unfavorable characteristics. On the plus side, memory and storage components are vital to next-generation applications in artificial intelligence, the Internet of Things, gaming, and 5G communications.  AI deep-learning processes require massive amounts of data, which needs to be quickly accessible. At the same time, achieving faster and faster data transmission speeds also requires more memory. So, storage and memory will be essential components of the coming wave of tech innovations.

At the same time, however, storage and memory products are very much commoditized, which means the prices at which Micron and its competitors can sell their products fluctuate significantly based on supply and demand. Since mid-2018, a combination of large capacity additions and the destruction of demand due to the U.S.-China trade war has created a heavy oversupply that sent memory prices plunging.

That 2018-2019 memory-price crash hearkened back to the troughs of prior cycles, many of which caused Micron's bottom line to go negative. 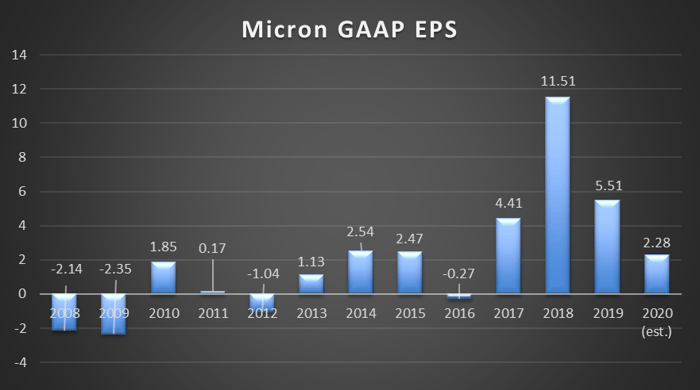 However, as the chart above also shows, Micron has been able to remain more profitable this time around than it was in prior oversupply periods. Though analysts expect earnings will plunge to $2.28 per share in the fiscal year that ends in August, that would nearly equate to the prior cycle's 2014-2015 peak.

It should also mark the bottom in both memory pricing and Micron's EPS. On December's conference call with analysts, management forecast EPS of $0.35 for the current quarter, plus or minus $0.06, while CEO Sanjay Mehrotra added, "Recent trends in our business give us optimism that our fiscal second quarter will mark the bottom for our financial performance, which we expect to start improving in our fiscal third quarter, with continued recovery in the second half of calendar 2020."

Yet the current stock price, around $56, is still just 24.5 times this year's earnings estimates -- which should be the trough. Meanwhile, its valuation is less than five times the earnings from its peak year of 2018. Clearly, the market is not willing to value Micron at the same type of multiple it gives to other technology and non-memory chip stocks -- or it doesn't think the company can reach its 2018 peaks again.

How Micron could rerate much higher

In order for Micron to become a millionaire-maker stock, then, it would have to eventually be rerated higher by investors relative to its past. This would either entail Micron growing EPS a lot, or providing steadier, more predictable results, which could lead investors to assign it a higher multiple to its earnings. Fortunately, I think there are several ways the company can do both going forward.

It's important to understand why Micron has been more profitable throughout the current cycle, and why it may continue to improve in future cycles. First, demand for memory and storage products has grown a lot, and diversified from just PCs and phones to cloud data centers, automated cars, and other big data applications.

But demand won't mean much if memory producers continue to oversupply the market. Fortunately, Micron has benefited greatly from -- and participated in -- industry consolidation in the past five years or so, buying up distressed competitors Elpida Memory in 2013 and then Inotera Memory in 2016. These moves consolidated the DRAM market, where Micron gets 67% of its revenues, down to just three players, and also gave Micron greater scale to improve its margins.

This is important because now, instead of a situation in which many competitors are fighting for market share in tough times, the three major DRAM players have the incentive to balance their supply with demand, rather than fighting for scraps and survival. Their behavior has reflected that during this cycle: Both of Micron's Korean competitors, Samsung (OTC: SSNLF) and SK Hynix (OTC: HXSCL), have cut back on capital expenditures significantly along with Micron, shortening the duration of the cyclical trough and enabling all three to remain profitable during it.

While consolidation may help ease oversupply situations, technology constraints are also making it harder for memory companies to produce more chips, even if they want to. The costs to increase bit production by 20% have just about doubled from a few years ago.

Some might say that this will drive heftier capital expenditures in the years ahead for Micron and its peers as they grow their operations, which may be true. However, it also means it will be more difficult to bring supply online after cutbacks, which could make any price drop relatively shorter. And if demand surges, there could very well be shortages, as there were in 2018.

Tailwind No. 3: Micron is improving relative to competitors

In addition to the fact that it is operating in a more favorable competitive environment, Micron has also gone from being a cost laggard in the industry to parity with the cost-per-bit levels of competitors Samsung and SK Hynix.

Not only has Micron caught up, but it may have actually surpassed Korean competitors on some fronts. In August, Micron became the first memory company to mass-produce DRAM chips using its 1z nanometer process, which offers the smallest feature size DRAM node in the industry.

These improvements occurred under former management and more recently under current CEO Sanjay Mehrotra. Micron's structurally lower costs mean that the company should achieve higher profitability in downturns than in years past, when competitors could undercut it on price. Once investors grasp this,  the market could rerate Micron shares even higher.

Tailwind No. 4: A massively better balance sheet and share buybacks

Finally, Micron's earnings per share are not the only thing that's improving. The massive boom of fiscal 2018 enabled Micron to drastically improve its balance sheet, while also initiating a $10 billion stock repurchasing program. Since the second quarter of fiscal 2017, Micron has gone from $7.8 billion in net debt to a stunning $2.7 billion in net cash. Not only that, but it also bought back $2.7 billion of stock in the fiscal year that ended in August, retiring some 7% of outstanding shares.

If Micron can continue to generate sustainable cash flows and its valuation remains relatively low as a multiple of earnings, the company could retire a very significant number of shares in the meantime, further increasing EPS.

A millionaire-maker in the making?

If the company (and the industry) can continue to smooth out future memory cycles, generate sustainable profits, and buy back a significant amount of shares, I can definitely see a scenario in which Micron's shareholders become very wealthy over the long term.

As is usually the case, however, the outlook for storage and memory pricing in any given year is hard to predict, and sales of these components are also quite sensitive to broader economic conditions. Nevertheless, Micron's share price is still below its all-time highs set back in mid-2018, and you would be hard-pressed to find a technology stock with a valuation this cheap currently. Those willing to brave the significant volatility and risk could be rewarded handsomely.