The burrito slinger has been satisfying investors' wallets and consumers' appetites. Will the good times continue?

Chipotle Mexican Grill (CMG -1.48%) was on fire in 2019, soaring 94% for the year and becoming one of the best-performing restaurant stocks of the past decade. With that kind of performance in the rearview mirror, it's tempting for investors to assume the company's best days are behind it, but that would be a serious mistake in the case of Chipotle.

The company is scheduled to report its fourth quarter and full-year fiscal 2019 results after the market close on Tuesday, Feb. 4. Let's see what investors can expect when Chipotle reports earnings. 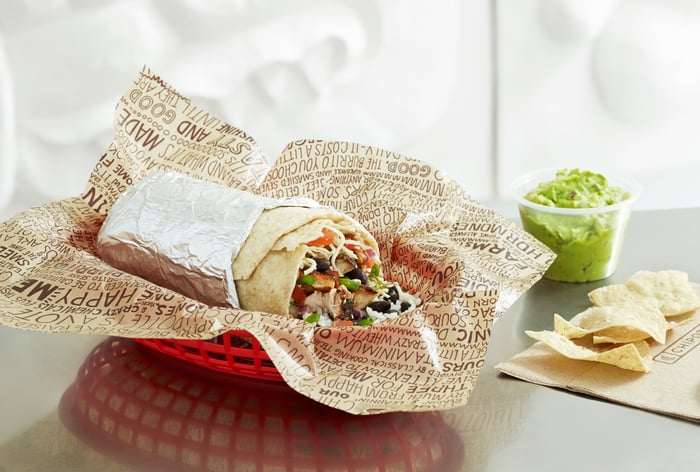 In the third quarter, Chipotle reported revenue of $1.4 billion, up nearly 15% year over year. This led to operating income that doubled, generating adjusted earnings per share of $3.82, up 77%. Both numbers handily beat analysts' expectations.

What led to the sterling performance? A number of impressive metrics tell the tale. Comparable-restaurant sales increased 11%, with a 7.5% increase in transactions and a 3.5% increase in the average check. Another big contributor was Chipotle's successful digital sales program, which grew 88% year over year and represented more than 18% of all sales for the third quarter.

An expanding operating margin also helped as profitability climbed to 20.8%, up from 18.7% in the prior-year quarter. With the leverage resulting from the increase in comparable-restaurant sales, every spending category was a lower percentage of revenue than the year-ago quarter, allowing more to fall to the bottom line.

Early last year, Chipotle introduced drive-thru lanes for customers placing mobile orders -- the company dubbed them Chipotlanes. Based on the early success of the program, the company has shifted its real estate strategy to find more locations that can accommodate a Chipotlane. Of the 80 restaurants currently under construction, about half will include a drive thru, which is expected to bring the total number to 60 by year-end. Looking ahead, Chipotle plans to open between 150 and 165 locations in 2020, with more than half of them including a Chipotlane.

Menu innovation is another important factor that has contributed to Chipotle's return to growth and will help boost its future results. Mid-year, the company began testing queso blanco -- its spicy, smokey cheese dip -- which received rave reviews, leading to an expansion of the trial. This is in addition to two other much sought-after offerings the company is testing. Chipotle answered consumer calls for both carne asada and quesadillas, which are being tested in a number of markets for a limited time. Management wants to ensure throughput doesn't suffer as a result of adding too much complexity to the menu.

It's important to note that the same factors that made 2019 successful for Chipotle -- digital ordering, Chipotlanes, menu innovation, increases in comparable-restaurant sales, and a measured pace of new store growth -- will also set the company up for success in 2020. If Chipotle can maintain the momentum it had going through last year, shareholders will be rewarded again as the company closes out its fiscal year.

For the full year, management is forecasting comparable-store sales growth in the high single-digits. The company was also expecting new restaurant openings of between 140 and 155 for the full year. This guidance doesn't give investors much to sink their teeth into, so we can look to Wall Street's expectations for more specific benchmarks.

For the fourth quarter, analysts' consensus estimates are calling for revenue of $1.40 billion, up 14% year over year, resulting in earnings per share of $2.75, soaring 60% over the prior-year quarter.

Chipotle has solid recent results and momentum in its corner, but there's one risk that shouldn't be overlooked: its frothy valuation. As of this writing, Chipotle has a price-to-earnings (P/E) ratio of 76, more than three times the average of 22 for restaurant stocks. Its forward P/E isn't much better, at a still-lofty 52.

This illustrates that the company already has high expectations baked into its stock price. While investors shouldn't look at this metric in a vacuum, if Chipotle fails to deliver this week, or shows any weakness -- real or imagined -- its stock could come tumbling down. If you have any doubts, revisit Wall Street's reaction to Chipotle's third-quarter results.

We'll get the full story when Chipotle reports on Tuesday.