Please ensure Javascript is enabled for purposes of website accessibility
Log In Help Join The Motley Fool
Free Article Join Over 1 Million Premium Members And Get More In-Depth Stock Guidance and Research
By Rhian Hunt – Feb 12, 2020 at 10:08AM

The popularity of Dunkin’s meat-free addition may foreshadow increased purchases by younger diners.

Jumping in with both feet while many of its competitors were still dipping a cautious toe in the uncharted waters of plant-based breakfast "sausage" patties, Dunkin' Brands (DNKN) rolled out the Dunkin' Beyond Sausage sandwich at 9,000 of its locations last November. Fans of the new food seem willing to drop more money at the restaurant each time they visit thus far, which could be good for Dunkin's bottom line into the future, assuming it can keep up the momentum.

Dunkin's new menu item gets a cautious thumbs up

Dunkin' moved aggressively into meatless breakfast sandwich menu items in late 2019, following brief midyear testing in New York City. The company partnered with Beyond Meat (BYND -0.86%) to offer the plant-based food alongside traditional pork sausage sandwiches. Featuring a hexagonal patty made of a slew of different proteins -- from pea and rice to mung bean and sunflower -- some reviewers online think Beyond Sausage tastes very close to the real thing, though a bit softer and less juicy.

According to CEO David Hoffman during the Dunkin' Q4 2019 earnings call, orders including the new breakfast item rang up almost double the restaurant's average $5 purchase, at more than $9 per meal. Customers typically pair the sandwich with one of Dunkin's trendy high-priced espressos or other beverages from the top end of its menu. This is a major factor in making Beyond Sausage orders more profitable for the restaurant. Though the company didn't release exact sales figures, Hoffman said on the call that the Beyond Sausage sandwich fueled lots of sales from both new and returning customers. 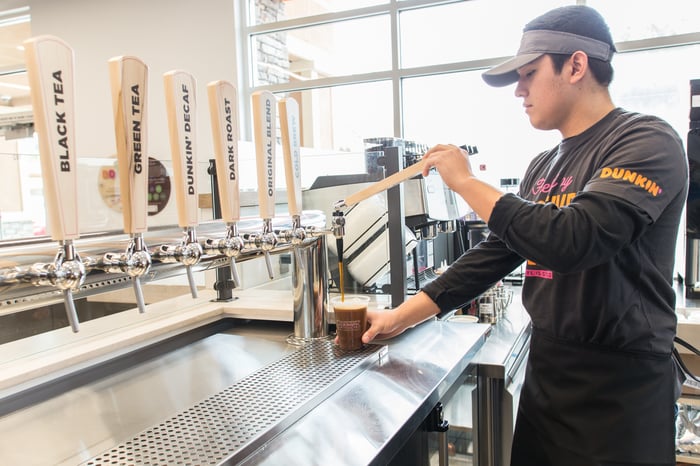 In response to an analyst question later in the call, Hoffman shared some generalized demographic data on a typical Beyond Sausage buyer -- a young woman living on the East or West Coast. The CEO went on to stress the importance of the plant-based sandwich in helping attract younger diners to the restaurant, a challenge for any long-established brand. Dunkin's claims of 33% less saturated fat, reduced cholesterol, and less salt in its new pea protein patty certainly align with younger generations' focus on eating right as a key to health, with 24% of Millennials and 40% of Gen Z concerned with consuming wholesome foods compared to 12% of Boomers and 14% of Gen X.

Whatever the Beyond Sausage sandwich gamble achieved for Dunkin', it certainly didn't hurt the company's bottom line. Adjusted net income for the whole year rose 7.6% year over year, while diluted earnings per share (EPS) grew 6.6%. Comparable store sales rose across the board, a notable improvement over the weak or declining sales posted in 2018. Dunkin' outlets outperformed Baskin-Robbins restaurants in fiscal 2019, with comparable store sales growing 2.8% in the USA and 5.7% internationally, compared to 0.8% and 1.9%, respectively, for the ice cream brand.

Sounding a mildly cautionary note, traffic declined somewhat both during the quarter and the year at Dunkin' outlets, which blunted the benefits of bigger average meal orders for the chain's profitability. Baskin-Robbins witnessed a rise in traffic, but since it is a relatively less important and popular brand than Dunkin', this did not fully offset the lessened number of Dunkin' customers. While the traffic was negative for the period, it still improved on Dunkin's traffic figures for the previous year, perhaps once again pointing to the effects of the new meat-free and espresso menu items.

The company is moving ahead with its expansion plans, focusing on quality markets currently underserved by Dunkin' outlets. 385 net restaurants opened across the globe, 211 of them in the USA. As CEO Hoffman pointed out during the earnings call, all of the American openings occurred outside the well-developed brand networks in the eastern United States, maximizing their positive effects on profit and value. He estimated a $140 million boost to income from these restaurants. Since Dunkin' uses a franchise model, the openings did not add significantly to the company's capex (capital expenditures), making the expansion almost pure "gravy" for the corporation.

Is Beyond Sausage a fad item or an ongoing success?

While Beyond Sausage offered a healthy bite of profits to Dunkin' for one quarter of sales, the question remains whether it's a reliable revenue source or represents a mere flash in the pan caused by novelty. A single quarter's success, after all, does not guarantee long-term gains, an important consideration those investing in restaurant stocks.

Dunkin's new menu items like the Beyond Sausage sandwich, in my opinion, will prove to be a long-term factor in improving future growth. While they are just a single element in the company's strategy, plant-based and healthier food items compliment and amplify other value-building initiatives. The earnings call also emphasized that Beyond Sausage sandwiches are only the first of several major health-conscious menu items, including a "Power Muffin" and oatmilk lattes.

These meat-free or otherwise health-oriented ordering choices are well calculated to appeal to younger consumers more concerned with maintaining their wellness through the foods and beverages they consume. Many of these consumers are located in the coastal areas. The new menu items mesh with Dunkin's aggressive push to open hundreds of new outlets on the West Coast, and may help to ratchet profits higher by continuing the trend of increasing purchase size. Dunkin' appears on track to grow throughout 2020 and beyond.