Please ensure Javascript is enabled for purposes of website accessibility
Log In Help Join The Motley Fool
Free Article Join Over 1 Million Premium Members And Get More In-Depth Stock Guidance and Research
By Daniel Foelber - Feb 13, 2020 at 11:09AM

Which beaten-down company is the better buy?

On the surface, ExxonMobil (XOM -1.58%) and DuPont de Nemours Inc. (DD -3.21%) appear very different, but there are some similarities. Both companies are tied to global markets and commodity prices, specifically the refining side of oil and gas.

With Exxon's chemical and refining margins near the bottom of their 10-year ranges, and DuPont facing pricing pressure from its core nylon business (a byproduct of oil), it seems both companies are in the midst of some fairly serious short-term headwinds that are reflected in their fallen stock prices. Should investors ignore these two stocks, or does one seem poised for a turnaround over the long-term? 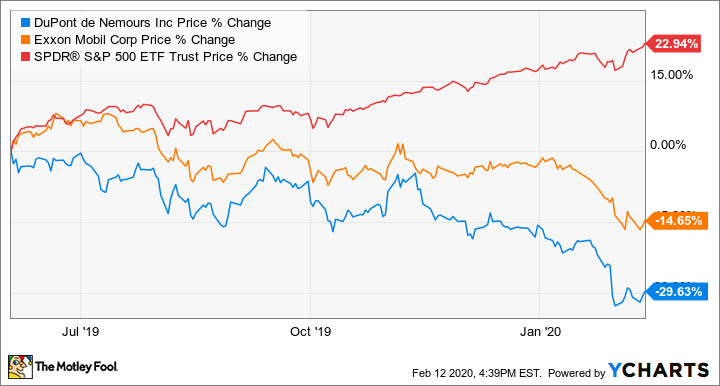 ExxonMobil sits bloodied and battered as a company with less than optimal public perception and lackluster 2019 earnings. Although energy stocks are cyclical businesses, it's a red flag when poor performance is a reflection of factors within a company's control, just as much as factors outside of its control.

For an integrated oil and gas company such as ExxonMobil, the silver lining to low oil and gas prices has historically been lower input costs for refining operations.

Quarterly results aside, Exxon's role in the energy mix of the future will be dependent on the relevance of oil and gas. This is the big picture question facing Exxon's long-term success.

The company's relevance is being tugged in two directions, favorably by the continual switch from coal to natural gas both domestically and abroad, the importance of oil and gas in the transportation and industrial sectors, and the many byproducts of oil in everyday life.

On the unfavorable side, the present oversupply of oil and gas is causing downward pressure on commodity prices and crippling Exxon's bottom line. With less income, it's going to be harder for Exxon to achieve the scale it needs to increase Permian Basin production to over 1 million barrels of oil equivalent per day (boed) by 2024 and return 10% at $35 oil.

If Exxon can navigate these choppy waters through a combination of disciplined capital management and high success rate growth opportunities, then it could lead the company to rise through adversity while so many other oil and companies are falling by the wayside through bankruptcy. The long-anticipated breakup of the world's largest chemical conglomerate, DowDuPont, began on April 1, 2019 when Dow Inc. (DOW) spun off from DuPont de Nemours.

Two months later, Corteva broke off from DuPont, concluding the spinoff. The spinoff was done in part based on the theory that each business would be stronger by itself. It also gives Wall Street a more clear-cut understanding of DuPont's business. For DuPont, it has exposed the company's vulnerability to the present global market.

As a conglomerate, DuPont's four core businesses of electronics and imaging, nutrition and biosciences, transportation and industrial, and safety and construction are meant to balance each other out through market cycles. But 2019 trade tensions in China "significantly challenged" DuPont's auto and electronics divisions, and the company expects negative 3% to negative 5% growth in its transportation and industrial segment in 2020.

To put it plainly, "the past year was a challenge given macro conditions negatively impacting about 40% of our portfolio, which led to weaker results versus our expectations going into the year," said DuPont CEO Marc Doyle during the company's fourth quarter 2019 conference call.

Aside from pressures in China that DuPont expects will contribute to a slow 2020 start, headwinds in nylon are expected to pound the company's 2020 earnings by negative $0.23 per share. That blow is significant when you factor in negative $0.28 per share from other discrete items, such as the costly and ongoing dispute over environmental issues that DuPont is handling with Chemours (CC -3.43%).

Together, these negatives counteract all of the organic growth, efficiencies, divestments, and cost actions that DuPont is expecting in 2020. When the dust settles, DuPont is forecasting $3.70 to $3.90 earnings per share (EPS) in 2020, which represents no growth compared to $3.80 of actual EPS in 2019.

One of the few positives for DuPont is its strong free cash flow (FCF). DuPont reported more than 100% FCF conversion for the third and fourth quarters of 2019 and expects greater than 90% FCF conversion for 2020. FCF conversion is a percentage expressed as FCF over net income. It's essentially how much of a company's net income could be converted into valuable FCF that can be used to pay down debt and grow dividend distributions, among other things. 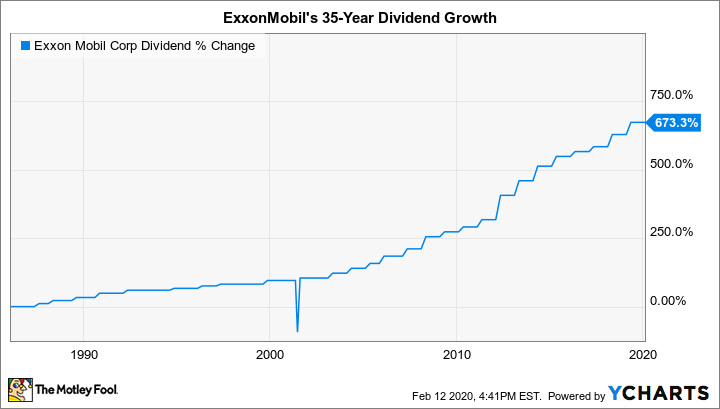 If there's one thing Wall Street hates, it's stalling growth. Both ExxonMobil and DuPont have a good amount of problems on their hands for the foreseeable future.

While it's difficult to advocate if Exxon and DuPont are true value stocks given their strained earnings, both companies sport impressive dividends. DuPont yields 2.3% and Exxon yields 5.6%, the most in over 10 years. Exxon has also raised its dividend for 36 consecutive years.

Approaching either of these stocks should be taken with caution, but Exxon gains the edge over DuPont, given its powerful stance in the global market, strong balance sheet relative to its peers, and superior dividend yield and track record.