Please ensure Javascript is enabled for purposes of website accessibility
Log In Help Join The Motley Fool
Free Article Join Over 1 Million Premium Members And Get More In-Depth Stock Guidance and Research
By Rich Duprey – Feb 17, 2020 at 11:15AM

The debt financing keeps the lights on for now, but there are other challenges beyond money.

With industry leader Juul Labs bearing the brunt of the blame for teenage use of electronic cigarettes, and finding its partner Altria (MO 1.52%) now wanting to put some distance between the two of them, the e-cigarette maker was forced to dip into the debt markets to raise $721.6 million. It's a move typically used by cash-starved companies that can't afford the optics of a poor round of secondary financing.

While the money lets Juul keep the lights on for some time to come and Altria hasn't completely severed ties, it's still reasonable to ask how much longer Juul will be able to survive under these conditions. 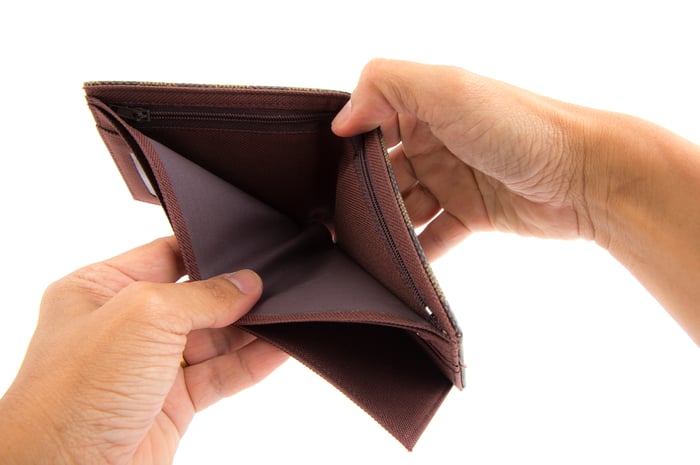 The biggest threat to Juul's continued existence is in not getting its pre-market tobacco product application (PMTA) approved by the Food and Drug Administration, one of its harshest critics.

The PMTA must be submitted by May 20, and Altria has promised it will assist in formulating the complicated and expensive document. Altria CEO Howard Willard told analysts on its earnings conference call last month that the tobacco giant's "primary focus is on helping Juul file a compelling and complete PMTA."

Even though it's written off two-thirds of its $12.8 billion investment in Juul, the tobacco giant isn't ready to give up completely on the company.

Preparing for the inevitable

But the cigarette maker is erecting a wall between them. When Altria wrote down the second tranche of value for its investment, it modified its agreement with the e-cig maker to give it several escape routes from noncompete clauses in the e-cig market if Juul's value falls below certain levels.

Moreover, the cigarette maker had been in early talks with Philip Morris International (PM 0.38%) about merging the companies together again, but because of the persistent criticism of Juul by the FDA, Philip Morris squashed any hope of them rejoining as one, saying the two companies would simply focus on their partnership for marketing Philip Morris' IQOS heated tobacco device in the U.S.

Also, because the IQOS has received FDA marketing approval (though not a reduced-risk label yet), Altria, which is selling it in the U.S., already has a product on the market with the agency's imprimatur on it.

Formidable forces arrayed against it

There's good reason to doubt Juul's chances of gaining FDA approval for its e-cig. Former commissioner Scott Gottlieb has on at least two occasions publicly expressed doubts about the likelihood, and though his sphere of influence may be diminished since he left the agency, he must still know the feelings of those who remain.

All e-cig manufacturers have to get their PMTAs in by May, and it's doubtful smaller companies (perhaps even some larger ones, too) will be able to afford the cost of compliance.

Philip Morris and British American Tobacco (BTI 1.64%) are the only two e-cig makers that have filed so far despite the deadline approaching; it has cost them millions of dollars, and their applications have run hundreds of thousands of pages or more. It will be tough for a small company to do so, and the regulations apply to device makers as well as e-liquid manufacturers.

If they don't submit an application, the FDA can order their products off of store shelves. Even if they do meet the deadline, they're still living on borrowed time since the agency has only a year to make a decision on whether to approve the application (it took Philip Morris over three years to get the nod). If the application is denied, the products are again subject to removal.

It comes down to valuation

That sets the hurdle for Juul extremely high, and it suggests that even with the more than $700 million in financing it received, its days may be numbered.

According to The Wall Street Journal, the convertible notes are predicated on how its next round of financing values the company: If it's between $10 billion and $25 billion, the notes convert into equity; if lower than $10 billion or higher than $25 billion, it will be treated as debt.

Juul really has few options. While it had once thought it could expand overseas to grow, the e-cig maker has had to largely abandon those efforts so it could focus just on its PMTA. With Altria's guidance, it may still make it over the finish line, but the outlook is increasingly bleak.