Please ensure Javascript is enabled for purposes of website accessibility
Log In Help Join The Motley Fool
Free Article Join Over 1 Million Premium Members And Get More In-Depth Stock Guidance and Research
By Rich Duprey – Feb 27, 2020 at 9:40AM

The global tobacco giant may not be the contradictory pick it initially sounds like.

Philip Morris International (PM -4.18%) isn't going to be found on the buy list of any ESG investment fund. In fact, based on the percentage of global equity funds that own the stock, financial advisor site WealthManagement.com identifies the tobacco giant as the company blacklisted the most by ESG funds.

Yet despite cigarette companies generally being viewed as the antithesis of environmental, social, and governance investing, maybe when it comes to Philip Morris International, it's time that view is revisited. 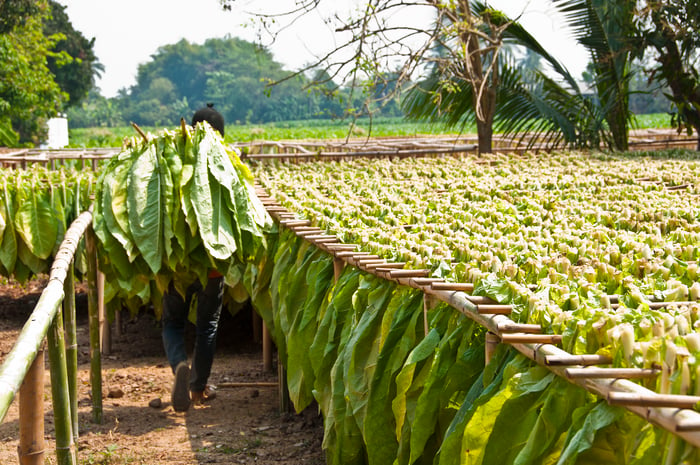 On the outside looking in

Philip Morris CEO Andre Calantzopoulos attended the World Economic Forum in Davos, Switzerland, last month, though not as one of the invited elite guests of the annual corporate and political gathering.

While the tobacco company had a significant presence, it was more of an attempt to convince those attending that Philip Morris was sincere in its desire to rid the world of the scourge of cigarette smoking.

Philip Morris began a campaign several years ago to create a "smoke-free future." The company says it believes its IQOS heated tobacco device should be seen as a force for good because of its ability to wean smokers off of traditional cigarettes.

In an interview with CNBC, Calantzopoulos said Philip Morris' ESG mission was to first "resolve the problem of cigarettes, because that's what is unsustainable."

First, do no harm

In the tobacco giant's latest sustainability report, it notes the company's transformation to a sustainable business model is built upon four pillars centered around developing and commercializing products that are less harmful than cigarettes, while managing the company's social and environmental impacts.

The development of reduced-risk products is accelerating at Philip Morris as smoke-free products accounted for nearly 20% of revenue in 2019, up from just under 14% the year before.

Heated tobacco unit shipment volume jumped 44% year over year to almost 60 billion units last year, and Philip Morris forecasts it will hit its 2021 target of between 90 billion and 100 billion units.

That's still a long way from the 706 billion cigarette units it shipped in 2019, but the rollout of IQOS in the U.S., the world's biggest e-cig market, along with tough regulation of competing electronic cigarette alternatives, ought to narrow the gap considerably within the next few years.

Without question, Philip Morris International still has some big challenges on the ESG front -- arguably with its use of child labor at the forefront. Although it is a cultural norm in some countries for children to work alongside adults in agricultural fields, the tobacco giant has a goal of having zero child labor used in its supply chain by 2025.

CSRHub, which ranks companies on their social responsibility and ESG metrics, has identified child labor as one of two special concerns confronting Philip Morris (the other is the use of GMOs), but it has assigned the tobacco company a 62% rating, well ahead of the sub-50% ranking of the tobacco industry writ large.

While Philip Morris is actively addressing the issue, it says there are "complex socio-economic challenges" that need to be overcome, something a single company can't do on its own. Even so, it has aligned its own labor practices program more closely with that of the U.N.'s Guiding Principles on Business and Human Rights.

Don't dismiss tobacco out of hand

It is unlikely the global tobacco company will be deeply embraced by the ESG investment community, but shunning a business that is making strides in harm reduction while improving its own sustainability record seems shortsighted.

Direction may be more important than location, and Philip Morris International is certainly moving forward, even if it hasn't arrived yet. And as reduced-risk products assume ever larger percentages of its sales, this tobacco stock just might be worth considering as your next ESG investment.