Please ensure Javascript is enabled for purposes of website accessibility
Log In Help Join The Motley Fool
Free Article Join Over 1 Million Premium Members And Get More In-Depth Stock Guidance and Research
By Rich Smith - Feb 29, 2020 at 9:14AM

U.S. Air Force brass have been attempting for years to ground the service's fleet of A-10 "Warthog" ground-attack jet fighters. Now they're at it again -- but this time there's a novel twist to this story. At the same time as one arm of the Pentagon works to cancel the A-10, another arm is working up a 21st Century replacement. 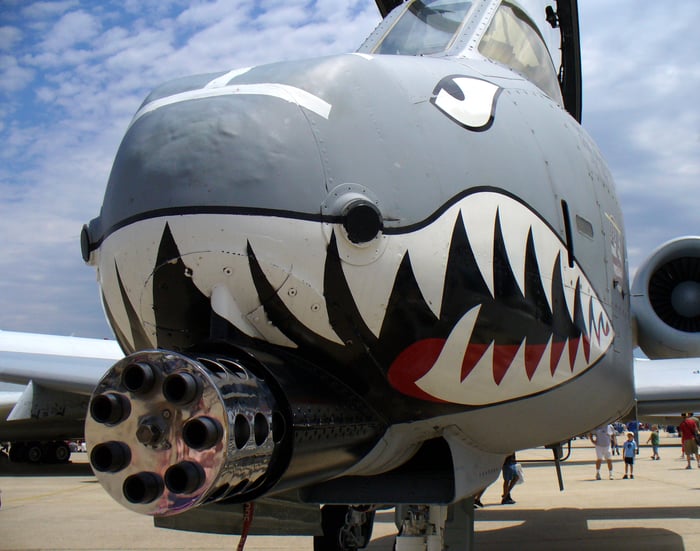 The A-10 Warthog's most famous feature is its really big gun. Now DARPA wants a flying gun... without the plane. Image source: Getty Images.

USAF keeps its promise ... sort of

As the Air Force Times reported last week, the Air Force "unveiled plans Feb. 10 to begin ... retiring some A-10s even as it refits others with new wings."

As Air Force Deputy Assistant Secretary for Financial Management Maj. Gen. John Pletcher explained, the Air Force is spending "$161 million to continue the rewinging and avionics upgrades" of some A-10s, and is furthermore sticking (at least in part) by its promise to keep at least 218 "modernized" A-10s flying through the next two decades. Nevertheless, USAF wants to retire 44 other A-10s starting later this year -- and that effort could endanger the $2 billion revenue stream that Boeing (BA -1.98%) expects to ultimately receive as it works its way through the entire A-10 fleet, upgrading and replacing wings that are getting a bit long in the tooth.

Now there's good news here, too, for Boeing -- and for fans of the A-10. In the halls of the U.S. Senate, Armed Services Committee member Martha McSally was herself a former A-10 pilot -- and she's dead set against the Air Force's plan. Likewise in the House, there's Rep. Ann Kirkpatrick -- who isn't an A-10 pilot, but does represent an Air Force base where the planes are stationed.

Just in case they fail in their efforts to keep all the A-10s funded, though, an entirely different arm of the federal government is working up a plan that just might become the future of close-air support for U.S. troops on the ground ... and it involves a drone.

This remote-controlled drone, dubbed "Gunslinger ... will utilize the high maneuverability of a missile system coupled with a gun system capable of scalable effects and engagement of multiple targets." Launched midair from a larger aircraft, Gunslinger would be jet-powered and feature an internal gun system (perhaps a Gatling-type gun such as the A-10 carries), which the drone would use to strafe targets on the ground, as well as engage targets in the air. It would be analogous to a similar program DARPA has in the works -- "Flying Missile Rail" -- which is developing a drone that can attack targets with missiles.

When will it get built, and who will build it?

The answers to those questions, I fear, would be "definitely not soon" and "we don't know yet."

At this early stage, most of the details on Gunslinger remain up in the air (so to speak), as DARPA is only exploring "conceptual design work and modeling." But ultimately the goal will be to develop a working prototype, then test it, and eventually deploy it to the Air Force and Navy -- so a process that will probably take at least several years.

Judging from how past DARPA projects have worked, the first step would likely be to invite companies to submit proposals to build various systems broadly meeting the objectives laid out in the FY 2021 budget request. Potential bidders, if I had to take a guess, might include giant defense companies such as Raytheon (RTN), which has significant experience building remotely controlled MALD (Miniature Air-Launched Decoy) missiles that perform independent missions as drones. I would also expect to see expressions of interest from Kratos Defense & Security (KTOS 0.00%), which has taken a leading role in developing jet-powered combat drone systems for the Pentagon -- most famously, the Gremlins drone.

And there could be others. Depending on the size of the "gun" Gunslinger will carry, for example, defense contractor AeroVironment (AVAV 0.04%) is the most prolific Pentagon provider of small, expendable Switchblade kamikaze drones. Moving back up the scale, Boeing, Northrop Grumman, and Lockheed Martin also have drone programs, and might be interested in bidding. (Indeed, because Boeing and Northrop currently provide maintenance support for the Warthog fleet as part of the A-10 Prime Team, they might view Gunslinger as a way to preserve their revenue streams if the A-10s ultimately do get phased out).

Long story short, for now Gunslinger sounds more like a pie-in-the-sky kind of project, and one that might never get built -- by anyone. Then again, only five years ago DARPA's idea of building flying aircraft carriers -- planes, carrying drones that launch to attack targets and then land back on their flying mothership. Five years later, we saw the first Gremlin launched from a C-130 transport aircraft midair just last year.

Just because a project sounds a bit like science fiction doesn't mean the mad scientists at DARPA can't turn it into reality.