Please ensure Javascript is enabled for purposes of website accessibility
Log In Help Join The Motley Fool
Free Article Join Over 1 Million Premium Members And Get More In-Depth Stock Guidance and Research
By Evan Niu, CFA - Mar 3, 2020 at 10:00AM

Here's why developers aren't interested in the game-streaming service.

Launched back in November and billed as a revolutionary game-streaming service, Stadia continues to underwhelm investors. Alphabet (GOOG -2.57%) (GOOGL -2.45%) subsidiary Google just cannot seem to get it right. The initial launch was plagued by technical hiccups and overall disappointing performance, which is never a good first impression for a brand-new service that is trying to upend the $40 billion game console market.

Meanwhile, the catalog of available titles is also underwhelming. Stadia is set to score 10 exclusives in 2020, but the current lineup of games are mostly available on other platforms. Here's why. 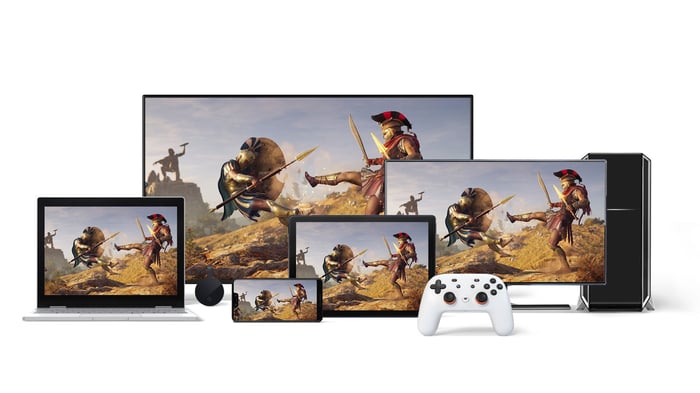 Business Insider reports that Google has failed to make compelling pitches to woo over many game developers, particularly smaller independent studios that release indie titles. The search giant has approached many developers to create games for the platform, but the incentives that Google has offered are sorely lacking, according to the report.

Specifically, the financial incentives were "non-existent" and "so low that it wasn't even part of the conversation," several anonymous sources told the outlet. Games take an extremely long time to create, and developers need resources to invest in their talent, particularly as the industry has a reputation of overworking employees. Alphabet closed 2019 with $120 billion in cash on the balance sheet.

At the same time, Google's earned reputation of experimentation is also hurting its prospects. The company has a decadeslong history of trying out new services -- some of which proceed to be wildly successful -- but quickly killing off any that fail to gain traction in their respective marketplaces. If Stadia continues to flounder, Google wouldn't hesitate to shutter Stadia and abandon those developers.

There's also a sort of chicken-and-egg dilemma that developers face, particularly in the absence of meaningful financial incentives. Developers are attracted to platforms with larger audiences of gamers, and gamers are attracted to platforms with more content. Third-party estimates suggest that many games on Stadia only have a few thousand players, a rounding error compared to the millions of gamers that play those same titles on consoles and other platforms.

The right way to launch a subscription gaming service

In contrast, Apple (AAPL -1.80%) has reportedly put $500 million behind Apple Arcade, its own subscription gaming service. Developers that got on board were reportedly given millions of dollars each in order to fund development.

Apple Arcade is different from Stadia in many notable ways: Games are downloaded instead of streamed from the cloud; subscribers get access to the entire catalog for $5 per month; Arcade is a mobile-centric service, although games can be played on Apple TV; and Apple specifically approached indie studios for exclusive content.

Apple knew that it needed to seed content well in advance, and allocated money accordingly. It's unclear how many Apple Arcade subscribers there are, but strategically Apple is executing with its subscription gaming service far better than Google is with Stadia.