Please ensure Javascript is enabled for purposes of website accessibility
Log In Help Join The Motley Fool
Free Article Join Over 1 Million Premium Members And Get More In-Depth Stock Guidance and Research
By Daniel B. Kline - Mar 3, 2020 at 10:34AM

It could be a blueprint for the how it operates should a major U.S. outbreak occur.

Starbucks (SBUX 3.76%) has a major presence in China and it has faced significant business disruptions due to COVID-19, the disease that has infected 90,000 people worldwide. The company has been aggressive in how it has handled the situation, with Starbucks Coffee International President John Culver making it clear where the company's priorities are.

"We're focused on making sure we're taking care of our partners, their health and well-being, as well as the customers," he said during the coffee company's first-quarter earnings call. 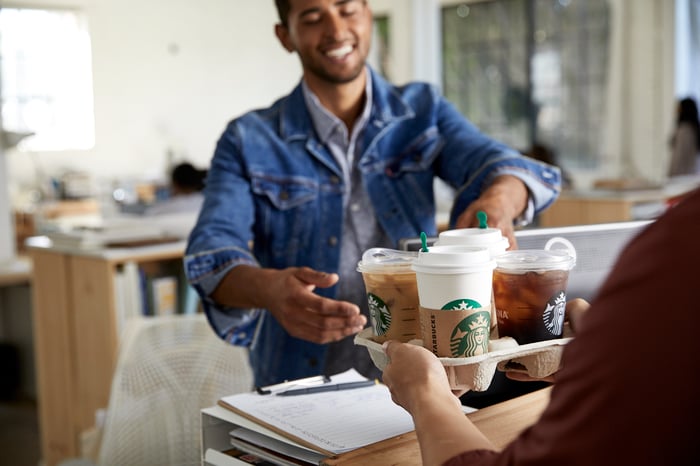 Starbucks could curtail delivery or close stores if coronavirus becomes a major problem in the U.S. Image source: Starbucks.

How Starbucks has handled closures

Culver said the company has worked with the local government to decide when to close stores. It has also been proactive in closing in order to protect the health of its workers and customers.

"We currently have over half our stores closed in the market," he said during the late-January call. "We are assessing this each and every day."

Starbucks still offers delivery from stores that have remained open. That's also being evaluated on a daily basis, according to Culver.

If coronavirus becomes a major issue in the U.S., expect Starbucks to put employee and customer safety over short-term profits. That's the right thing to do but it's also not a purely altruistic move. Closing stores proactively protects the company from the public relations nightmare that it would face if staying open led to Starbucks being blamed for spreading the virus.