Big health insurance stocks soared on Wednesday after the results from the Democratic Super Tuesday primaries. Shares of Anthem (NYSE:ANTM) were jumping 13.9% higher as of 11:12 a.m. EST. Humana (NYSE:HUM) wasn't far behind, with its stock up 13.4%. Cigna's (NYSE:CI) shares were rising 10.1% higher. UnitedHealth Group (NYSE:UNH) stock was climbing by 9.9%, while CVS Health (NYSE:CVS) shares were up 4.5%.

The impressive performance by former Vice President Joe Biden in the Democratic primaries on Super Tuesday boosted investors' optimism about the prospects for health insurers. Biden won at least nine states and 351 delegates compared to three states and 280 delegates for Vermont's Sen. Bernie Sanders. Two states -- California and Maine -- haven't been called yet by The New York Times, although Sanders is the clear leader in California while Biden has an edge in Maine. 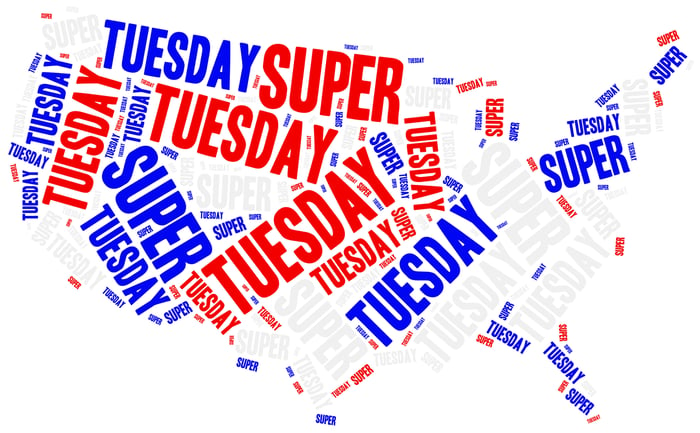 Sen. Sanders advocates a Medicare for All program that would largely eliminate the need for health insurance. His strength in the ongoing presidential campaign caused investors to worry about what might happen with big companies including Anthem, Humana, Cigna, UnitedHealth Group, and CVS Health (which owns Aetna).

Now, however, former Vice President Biden appears to be the frontrunner for the Democratic presidential nomination. Several candidates have dropped out of the race and endorsed Biden, with former New York City mayor Mike Bloomberg the most recent to do so.

Biden's healthcare plan is to preserve and expand Obamacare. He wants to allow individuals to buy health insurance similar to Medicare, an idea that's referred to as the "public option." Biden also seeks to extend coverage under Obamacare to more Americans.

This plan is much more attractive to major health insurers than Sanders' Medicare for All proposal. Anthem, Humana, Cigna, CVS Health, and UnitedHealth Group benefited from Obamacare and could do so under Biden's healthcare plan as well.

The battle to win the Democratic presidential nomination isn't over. It's still possible that Sen. Sanders could emerge as the party's nominee. Should he prevail, healthcare stocks, in general, and health insurance stocks, in particular, will likely be highly volatile.

However, the probability that Sen. Sanders' Medicare for All plan will become a reality appears to be lower now than it was just a few days ago. Joe Biden's surprisingly strong performance on Super Tuesday certainly improves the prospects for health insurers who would face an existential threat under Sanders' healthcare program.