This share sale is about more than just raising cash.

In separate multibillion-dollar projects, the CEO of SpaceX and Tesla is aiming to build an entirely reusable spaceship, send a crewed mission to Mars, and build a network of satellites to beam broadband satellite internet to every human on Earth. All of this will require money -- a lot of money.

So, why is Elon Musk raising so little of it? 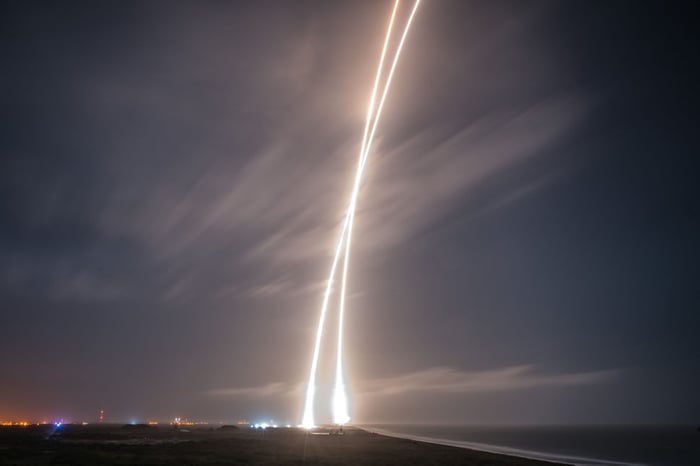 CNBC's Michael Sheetz scored another scoop last week, reporting that SpaceX is in the process of raising $250 million to help fund his multiple business ventures. In contrast to the last time Musk raised $250 million, though, this time, he's not taking out a loan. This time, he's selling stock.

A million shares of SpaceX stock.

Musk is organizing a private placement of SpaceX stock, priced at about $220 a share, with a closing date sometime in the middle of March. To raise his targeted $250 million, he'll have to sell about 1.1 million shares of SpaceX in total.

After the sale, SpaceX's total market capitalization will be "around $36 billion." To reach that market cap, SpaceX would therefore have to have about 163.6 million shares outstanding after the issuance.

(This is assuming, of course, that the shares in question are all common shares of SpaceX. In the past, SpaceX has also issued preferred shares convertible into common, which may affect the math somewhat.)

Here's where things get curious. In public statements, SpaceX has previously advised that it expects to spend $2 billion to $3 billion to develop the Starship spacecraft, $10 billion or more to build out his Starlink broadband internet satellite constellation, and at least $10 billion more to begin colonizing Mars.

Add it all up, and all of this is going to cost SpaceX...well, a lot more than $250 million, that's for sure. So, why is Musk even messing around with a penny-ante $250 million capital raise?

Here's one theory: SpaceX's new "funding" round is not actually about funding at all, but rather about determining the present value of SpaceX's stock.

Consider that last year, in June, SpaceX offered investors the chance to buy $314 million worth of SpaceX preferred shares at a valuation of $214 a stub. This month's new stock offering gives SpaceX a chance not just to raise a bit more cash, but also to confirm that SpaceX stock has retained its value through the coronavirus crisis -- and actually increased in value a bit even as the stock market has been crashing. From $214 a share in June 2019, to $220 today, SpaceX privately traded stock is up about 3% in nine months.

Why SpaceX needs this

Why is knowing this important to Elon Musk, and to SpaceX, especially if SpaceX has no intention of "cashing in" on its market cap by running an initial public offering?

Perhaps it's simply a math problem. We know Elon Musk prefers funding SpaceX through debt offerings rather than share offerings, for example, so as to not dilute his ownership stake in the company. (This is also, incidentally, the reason he doesn't want to SpaceX to have an IPO). However, debt offerings usually contain covenants forbidding a company from taking on more than a few times its equity value in debt. It's therefore helpful to know what that equity value is in order to know how much money SpaceX can borrow.

Or perhaps Musk is checking on the market value of SpaceX for a different reason. We know, for example, that SpaceX is planning to have an IPO of SpaceX subsidiary Starlink in the relatively near future. As an arm of SpaceX, it's likely that Starlink, when it comes public, will be priced as some percentage of the pricing for SpaceX as a whole. Thus, knowing how much SpaceX is worth could be helpful information when planning the Starlink IPO.

Both of these are just guesses, of course. The actual answer to the question probably lives only within the mind of Musk. But the evidence seems to suggest the reason Elon Musk is selling $250 million worth of stock this month is not just to get his hands on 250 million more dollars.

Here's What to Expect from General Electric This Quarter