Please ensure Javascript is enabled for purposes of website accessibility
Log In Help Join The Motley Fool
Free Article Join Over 1 Million Premium Members And Get More In-Depth Stock Guidance and Research
By James Brumley - Updated Mar 9, 2020 at 9:20AM

In fact, the department store chain should have prioritized styling-as-a-service in its stores a long time ago.

With little more than a passing glance at the matter, it would be easy to conclude Nordstrom (JWN 1.36%) simply misjudged the potential of personalized styling service/retailer Trunk Club. The company booked a nearly $200 million writedown in 2016 on the $350 million it spent to acquire the personal shopping service a year earlier, then announced just this week it would be shuttering all six of its service-oriented locations and will fold their operations into nearby Nordstrom stores. That move spurred another $32 million in charges and perhaps led some investors to think there's not enough merit to the idea of a clothes-shopping service.

Investors in a similar business -- Stitch Fix (SFIX -4.37%) -- need not worry though. Neither do fans of the apparel-picking service called Prime Wardrobe, unveiled by Amazon in 2016. The basic premise isn't the problem. Nordstrom's problem with Trunk Club was mostly the setting and application of the idea.

For the unfamiliar, Trunk Club is -- well, was -- a retailer with a twist. It wasn't just a store but a place where consumers could get personalized recommendations for finding their best look. It was initially intended to help men who feel uncomfortable making fashion decisions. Nordstrom added women's clothing to the mix in 2015. 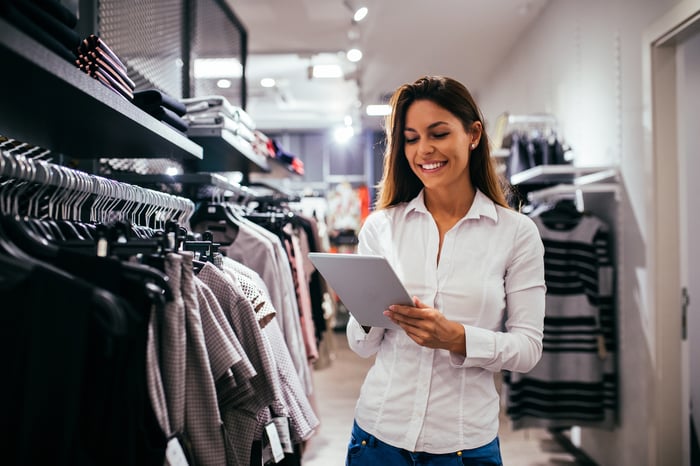 The service was a hit out of the gate, racing to annual revenue on the order of $100 million by 2014 after launching just five years earlier. But for likely more than one reason, that growth slowed, and Trunk Club has yet to rekindle the pace set in its early days.

The idea of personal shopping isn't necessarily a bad one. Nordstrom's mistake was seeking to meld online and offline in a way that didn't bring out the best of either option, and failing to plug Trunk Club directly into its network of stores in the first place.

The six Trunk Club locations look more like lounges and less like apparel stores, for the record, which admittedly has a certain appeal to some consumers. It's arguable, however, that the effort to present an air of exclusivity was so successful that too many shoppers weren't entirely sure they were being offered a full-blown shopping experience. That approach may have worked into the 1960s, but even high-end consumers have more tempered, pragmatic expectations about ambience these days.

That said, six retail locations also isn't enough to move the needle. For brick-and-mortar retail to "work," scale is necessary. Trunk Club on its own didn't have it.

Trunk Club also offered its styling services online, but that too seemed to run into a sea of competition like Dia & Co, Rocksbox, or Le Tote once the idea was proven. Stitch Fix is the dominant name in the business, of course, but there are plenty of smaller players doing the same. Trunk Club just didn't appear to do enough to make its presence stand out on the web.

Perhaps the biggest failing of Trunk Club was how long Nordstrom took to bring the service to stores where hordes of self-identified customers awaited.

The retailer's customer base is ideally suited for shopping services. Over 40% of its customers live in households earning more than $100,000 per year, making its average shopper notably more affluent than the typical Macy's or J.C. Penney customer. Yet, more than half of Nordtrom's guests are between the ages of 18 and 34, meaning they're busier than Macy's or Kohl's average shopper. Nordstrom has seen a big business boost in stores where it offers amenities like food and drinks, tailoring services, and more, reporting that these locations have seen single purchases grow an average of two and a half times the size of the company's typical sales receipt.

Point being, there's a market for personal styling services, including ones that charge a fee. They just have to be offered where more casual shoppers are exposed to them and where stylists themselves have access to a wider array of inventory.

That's why Stitch Fix and Prime Wardrobe work. Neither faces limitations created by an effort to maintain a walk-in retail presence while also operating a warehouse of inventory to peddle to online shoppers. An operation can leverage scale or offer lots of in-person attention, but it's difficult to do both.

And that's the good news for Stitch Fix, for any Trunk Club personal shoppers who will join Nordstrom's in-store teams, and Nordstrom itself. The idea is a proven sales driver, in the form of appointment-driven shopping excursions with a stylist capable of driving anywhere between two and four times as much spending as a walk-in customer may fork over. Those personal shoppers need prospects though, and somehow, it seems they'll get more through an established department store name than they might through a still mostly unknown name like Trunk Club.

Regardless of the Trunk Club-related writedowns, Nordstrom finally seems to have figured out what truly makes the curated shopping market tick. It wasn't a complete debacle but a learning experience well worth the cost, leaving the retailer even better prepared for a service-oriented future that will reward retailers with good stylists.