Please ensure Javascript is enabled for purposes of website accessibility
Log In Help Join The Motley Fool
Free Article Join Over 1 Million Premium Members And Get More In-Depth Stock Guidance and Research
By Rich Smith - Mar 10, 2020 at 8:08AM

Here's how one company, plus one publicly-traded stock, could evolve into many companies dominating space for decades.

From his initial acquisition of a failing textile manufacturer in 1964 through today, Warren Buffett built Berkshire Hathaway (BRK.A 0.07%) (BRK.B 0.67%) into a giant of industry, comprising multiple smaller individual companies. Could Virgin Galactic (SPCE 2.95%) one day become a similar holding company, and the beginning of a similar empire of corporate brands -- in space?

I think it might. In fact, if you examine the record of its founder, British billionaire Sir Richard Branson, I think it's even more likely than not. 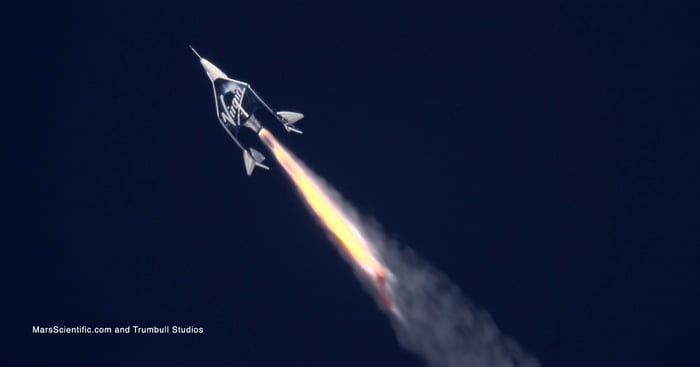 If you know Berkshire Hathaway, you know that it operates as a conglomerate of multiple companies, painstakingly curated, acquired, and assembled -- but operated separately and independently -- over the course of the last 50-odd years. Geico and Dairy Queen are probably the two companies Berkshire most famously owns. Perhaps less well known is that Berkshire also owns Duracell, Fruit of the Loom, Clayton Homes, and shoemaker Brooks, and many more besides.

The point being that Berkshire Hathaway is more than just a single company. It's a collection of companies, operated independently underneath the umbrella of a gigantic corporation.

How Sir Richard Branson operates (and how Virgin Galactic might)

Unlike Buffett, Sir Richard Branson and his Virgin.com Limited umbrella company (founded six years after Berkshire in 1970) tend to build their businesses from the inside out, or ground up, rather than scooping up other peoples' companies and bringing them in-house. Virgin also has a propensity for spinning off and/or selling its companies from time to time -- something Berkshire very rarely does. One of the Branson's first Virgin companies, for example, Virgin Records, is now part of Universal Music Group. Virgin Megastore got sold -- just before it went out of business.

But even so, Virgin has held onto more companies than it's sold. Today it holds subsidiaries in the vacation (Virgin Holidays), music (Virgin Radio), and banking (Virgin Money) industries, along with many, many more -- including, of course, satellite launch (Virgin Orbit) and space tourism (Virgin Galactic).

First to IPO, first in space?

Expanding on the success of his Virgin Atlantic airline, Branson set up Virgin Galactic in 2004, aiming to find an economical way to fly passengers even higher -- to the very edge of space.

Although other companies arguably had the idea of running space tourism flights first (Blue Origin set up shop in 2000), Branson cleverly managed to ensure that Virgin Galactic was the first space tourism company to actually go public. Last year, in a reverse merger into the already-publicly traded shelf company Social Capital Hedosophia Holdings, Virgin Galactic won a place for itself on the NYSE.

In so doing, Branson was not only able to boast of owning the "first publicly traded, pure play space company." He also obtained access to a unique currency -- Virgin Galactic stock -- that competitors such as Elon Musk's SpaceX and Jeff Bezos's Blue Origin do not have access to.

Virgin Galactic can now issue new shares of its stock essentially at will, permitting the company to create its own cash flow to support the business until paying customers are able to take over that role. Cash from selling Virgin Galactic shares might also support new ventures one day, such as:

And although it might go against his grain to do so, Branson might also use Virgin Galactic stock to snap up other space start-ups before they get big enough to compete with his company. Competitors such as Blue Origin, for example, are exploring alternative means of flying tourists to space. Rivals like Rocket Lab are using small rockets to put even smaller satellites in orbit. But until such companies become profitable (or at least public), they might be vulnerable to acquisition by a company like Virgin Galactic, which can essentially print its own money in the form of new, richly valued Virgin Galactic shares -- and play the role of white knight, saving other space companies before they flame out.

So, yes. While the future's uncertain for Virgin Galactic, I do see a path that could transform it, one day, into an umbrella company of its own -- and a dominant force in business of space for decades to come.