Goodbye, Stratolaunch. We hardly knew you.

For the first five months, 2019 was a good year for investors in the space industry. There was nary a bad headline, nor any indication that one of its high-flying start-ups was about to flame out in a blaze of bankruptcy. 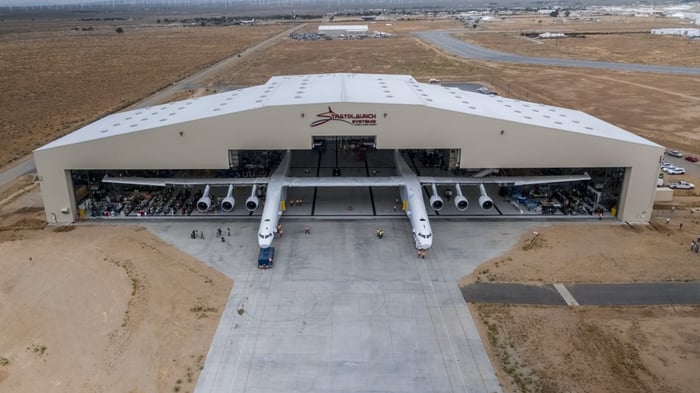 Earlier this year, I lamented the demise of Microsoft co-founder Paul Allen, who after retiring from the tech giant put his billions to work building a stratosphere-launched rocket company with the goal of lowering the cost of spaceflight. Stratolaunch, he named it, and the company's Roc aircraft made headlines in April when it became the largest airplane (by some measures) to ever fly.

This was more than a boast. Roc had to be big, because it was designed to be a mothership aircraft. The plan was that it would fly to 35,000 feet, and from there serve as a platform to launch rockets weighing as much as six tons -- or three smaller rockets, or even a reusable spaceplane -- into orbit.

In recent months, Stratolaunch modified its business plan, promising to end development of its own rocket payloads, and buy Pegasus XL rockets from Northrop Grumman (NOC 1.64%) instead. Regardless, even with Allen no longer around, Stratolaunch insisted it was going to forge ahead, and aimed to begin commercial rocket-launching operations by 2022.

But all for naught.

... and RIP Stratolaunch, too

According to the company itself, Stratolaunch "remains operational" as of today. However, in an exclusive report over the weekend, Reuters quoted no fewer than four people "familiar with the matter" asserting that management has decided to close up shop -- maybe not today, but presumably soon.

This isn't entirely surprising. After all, Stratolaunch did lay off three-quarters of its staff earlier this year, leaving it with only a skeleton crew of about 20 employees to see its projects to completion. Still, given that Northrop Grumman has a vested interest in keeping the company alive as a captive customer for its Pegasus rockets, space fans may have hoped the aerospace giant would step in to save (or buy) Stratolaunch.

That's still a possibility, albeit an increasingly faint one. Northrop doesn't necessarily need Stratolaunch to succeed. Worst comes to worst, Northrop still has its own mothership aircraft, a modified Lockheed Martin L-1011, that can carry its Pegasus rockets up to the stratosphere for launch. And keeping a customer on financial life support -- alive, but always carrying the risk of non-payment -- might not have been in its best interests in any case.

As for the effects elsewhere, Stratolaunch closing down removes a potential threat to Virgin Galactic, and to its sister company, Virgin Orbit, increasing the odds of a successful IPO in a few years. Those two are also going the airplane-to-rocket-to-space route, and probably could do without the competition.

And of course, the more the field of "New Space" companies gets winnowed, the greater the chances that rival small-satellite-launchers such as Rocket Lab (already) and Vector (soon) will survive, and eventually thrive. Much as we lament the imminent demise of Stratolaunch, it's still good news for investors hoping for the opportunity to buy into some eventual New Space IPOs, because it improves the odds of a healthier crop of survivors at the end.