Please ensure Javascript is enabled for purposes of website accessibility
Log In Help Join The Motley Fool
Free Article Join Over 1 Million Premium Members And Get More In-Depth Stock Guidance and Research
By Rich Smith - Mar 11, 2020 at 11:31AM

Coronavirus arrives in San Francisco -- so you cannot.

Coronavirus has arrived in San Francisco.

Local news station Channel 4 reports that there are now 89 confirmed cases of COVID-19 in the San Francisco Bay Area, including 14 known to be within the city proper.

In order to insulate itself (insofar as possible) from the contagion, Alphabet (GOOG -0.27%) (GOOGL -0.21%) subsidiary Google has announced that it is banning outsiders from visiting its "Googleplex" headquarters in Mountain View, located 40 miles to the southeast of San Francisco. Indeed, Google is banning visits to "all of its offices in the Bay Area" -- and visits to its offices in New York (where coronavirus is also active) as well. 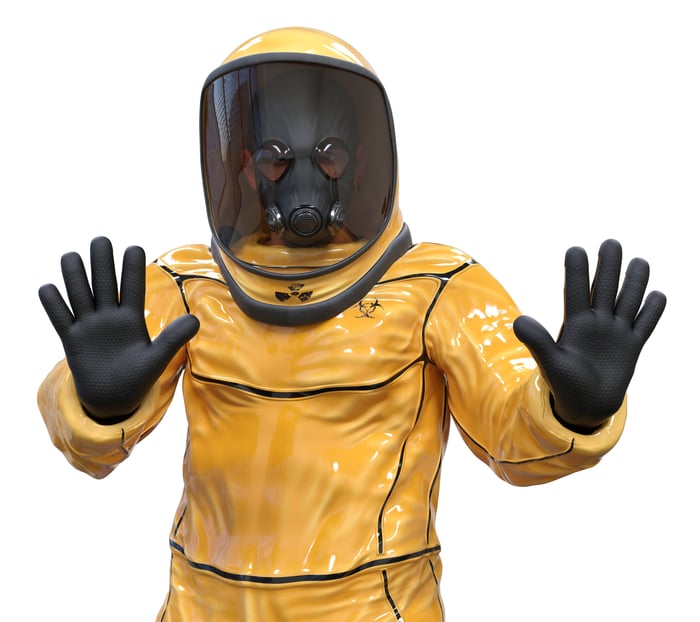 Battening down the hatches even further, Google is canceling in-person job interviews "for the foreseeable future," and last week the company canceled its annual "I/O" developers conference, which had been scheduled to take place in Mountain View from May 12 to 14.

And note -- that's not a typo: It's only March now, but Google is canceling events two months into the future, which suggests that this company, at least, doesn't appear to believe that the coronavirus pandemic is going to be solved anytime soon -- and is planning for a long-drawn-out contagion.

Nor is Google, or Alphabet, the only company taking this situation seriously, and buttoning up for a long wait. Facebook (META -0.76%), too, has reportedly banned visitors to its Menlo Park headquarters, and canceled a planned "F8" developers conference scheduled for May 5. Both companies are reportedly telling their employees to work from home as much as possible, to further limit the chances for face-to-face interaction -- or infection.