Please ensure Javascript is enabled for purposes of website accessibility
Log In Help Join The Motley Fool
Free Article Join Over 1 Million Premium Members And Get More In-Depth Stock Guidance and Research
By Nicholas Rossolillo - Mar 19, 2020 at 9:19AM

Even in times of crisis, money doesn’t completely stop moving.

With President Trump declaring a national emergency on March 13, the novel coronavirus pandemic is banishing millions of Americans to their homes -- either due to self-imposed quarantine because of illness (take care of yourself and get well soon!), corporate orders to work from home, school closures, or the general shuttering of many retail and entertainment stores.

The prospect of an ensuing economic slowdown has sent the stock market into an unprecedented tizzy. Nevertheless, money never sleeps, not even during times of viral-induced panic. While disruption is high, many businesses are set to benefit. Online shopping is sure to give Amazon a bump, and retailers like Walmart and Target that deal in everyday essentials should be just fine too. While restaurant stocks are a bloodbath, I think Domino's Pizza and its best-in-breed app and delivery capabilities will also come out on top.

Entertainment stocks are a different story, though. If recession strikes because of COVID-19, discretionary spending is one of the hardest-hit areas of the economy. Such pain is already being felt as theme park operators have closed. But Americans stuck at home still need something to prevent going stir-crazy. Three stocks that should benefit from that are Electronic Arts (EA 0.96%), Comcast (CMCSA 1.18%), and Roku (ROKU 2.85%). 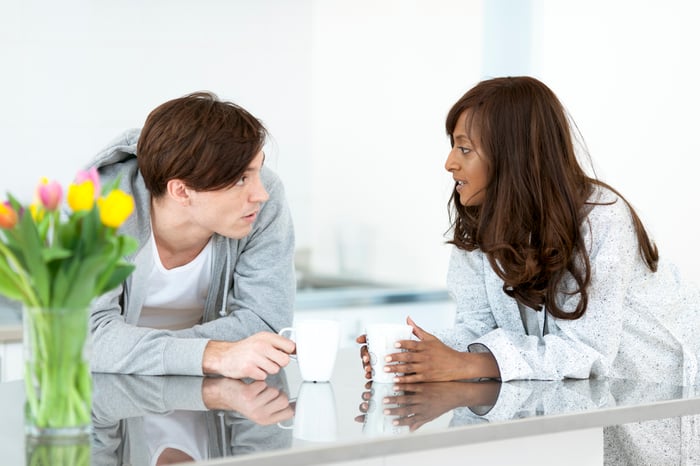 What an American workday looks like for the next couple of weeks. Image source: Getty Images.

Now, it is important to point out that shares are down by nearly half from their all-time highs set back in 2018. Due to a few new video game release misses, EA is only just now coming out of a sales slump. Its perennial Madden NFL Football franchise will also start getting some competition from rival Take Two Interactive's 2K sports series (another stock worth a look) next year after a 15-year exclusive deal with the NFL ends.

Nevertheless, EA has a lot going for it. Star Wars video games have been a big hit in the last year, the FIFA soccer franchise is a global powerhouse, and free-to-play blockbusters like Apex Legends still have plenty of playable shelf-life ahead. With lots of titles to choose from, I like EA's chances of picking up some new sales as America goes into quarantine.

But here's what I like best: Shares trade for just 15.0 times one-year trailing free cash flow (what's left after basic operating and capital expenses) and 9.3 times one-year trailing earnings per share. With management having forecast a 7% increase in revenue and the earnings per share forecast getting an additional bump from ongoing share repurchases, the stock looks like a pretty good value. This video game giant looks ready to capitalize on more time spent at home playing in the weeks ahead.

2. Comcast: Internet for the masses

Another staple of the modern world is the internet, especially so if households are cooped up at home. And right now, hated internet service provider Comcast is offering free internet for low-income households for the next 60 days -- a service that usually costs $9.95 a month. Free cancellations after the 60-day period expire are also allowed.

Now that is no reason to go buy Comcast, but it is some goodwill offered on the part of the company to help families manage what are sure to be challenging times in the coming months. Now more than ever, high-speed internet is important to everyday living, whether it be checking the news, staying in touch with family and friends, keeping devices (both work and personal) connected to digital tools, or getting in some downtime in front of the TV. And three-quarters of Comcast's business hinges on the internet.

Thus, love it or hate it, this is likely to be a resilient stock. Sure, it will be affected by COVID-19 like many other businesses. The NBCUniversal segment will have to contend with theme park closures, the loss of some broadcasting revenue, and movie releases getting delayed. But at the end of the day, it's the internet connectivity segment that really matters.

Since it's down 19% year-to-date, some disruption is already priced into this 21st-century staple stock. It also is trading at value pricing at 12.7 times free cash flow and 12.9 times earnings per share. If the economy does take a serious turn for the worse, Comcast should be just fine.

If you were like me and sat on the sidelines during Roku's meteoric rise -- which sent the stock up some 400% in 2019 -- second chances like this are rare. That's because coronavirus has nearly wiped out all of that run, sending the stock from highs briefly exceeding $160 a share the end of last year to under $60 as of this writing. Ouch!

Granted, there are good reasons shares of the connected TV and streaming platform have cratered. Roku is a high-growth stock that has been burning cash to maximize expansion, and owning money-losing businesses doesn't feel so hot when the economy is under duress. Advertising on its streaming ecosystem has also been the primary driver of growth in the last year (the company sells devices for little to no profit), so if ad spending from its partners suddenly gets cut (which happens during a recession), that could spell trouble for the modern TV company.

Over the long term, though, new active accounts and hours streamed will be the primary mover for Roku. And at 36.9 million active accounts and 11.7 billion streaming hours in the fourth quarter of 2019 (year-over-year increases of 36% and 60%, respectively), the company has momentum on its side. Bored families stuck in their houses should help perpetuate that trend.

Investors will need to hold their noses when buying this one, as the actual financial numbers could get ugly. To mitigate things, I'd recommend buying small lots of the stock over the course of a few months in case share prices continue in free-fall. But for those who believe that internet-based TV is the future, Roku just went on sale thanks to the global pandemic.