Please ensure Javascript is enabled for purposes of website accessibility
Log In Help Join The Motley Fool
Free Article Join Over 1 Million Premium Members And Get More In-Depth Stock Guidance and Research
By Andrew Tseng - Mar 19, 2020 at 9:15AM

To drive usage, the content needs to be compelling. That means sharing ad revenue with creators.

Facebook's (META -0.39%) Instagram is rolling out a new revenue share model for its IGTV video feature. IGTV is Instagram's long-form video product that is designed to be somewhat similar to Alphabet's YouTube.

Instagram rolled out IGTV in 2018 in an effort to compete in the long-form, user-generated content business. Creators can establish their own channels and upload up to hour-long video content. But IGTV hasn't taken off like Facebook hoped it would in part because there was no direct way for creators to make money on the platform.

Facebook paid certain celebrities to upload content to their IGTV channels. For example, Kim Kardashian West was supposed to create content for the feature but hasn't done very much with it. The largest deals for celebrities and influencers have been as much as $250,000 for 20 posts. But for the most part, most creators haven't had an incentive to create and upload compelling content because there's been nothing in it for them. 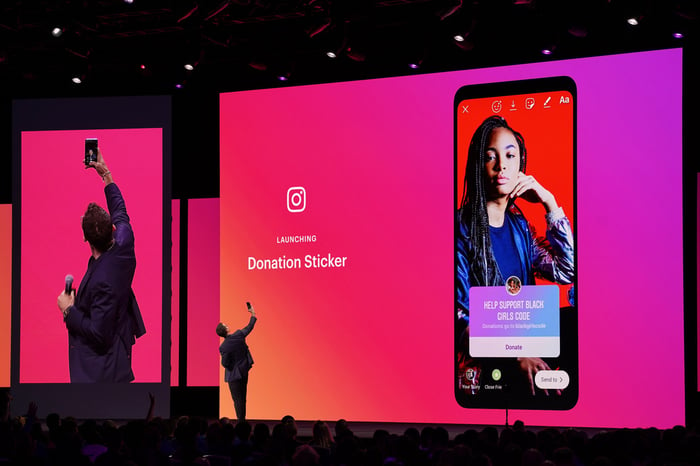 Why? IGTV's been an ad-free product. The lack of ads creates a better user experience, but without ad revenue, which can be shared with the content creators, the creators haven't had an incentive to create compelling content for IGTV. Instead, a lot of the content has been sub-par quality compared to YouTube or TikTok, or click-bait teasers that tried to push viewers over to their YouTube channels that can be monetized.

In January, Instagram removed the IGTV button from near the top of the app, where it was positioned next to the direct message button. Users weren't clicking on it and were finding videos in other ways. A Facebook spokesperson gave the following statement:

As we've continued to work on making it easier for people to create and discover IGTV content, we've learned that most people are finding IGTV content through previews in Feed, the IGTV channel in Explore, creators' profiles and the stand-alone app. Very few are clicking into the IGTV icon in the top right corner of the home screen in the Instagram app.

Facebook management wants Instagram to be a leader in the long-form, user-generated video business. YouTube is obviously the juggernaut of this business, but TikTok has been exploding in popularity as well.

In the first 18 months since IGTV launched, its stand-alone app was downloaded seven million times. That might sound like a big number, but Instagram has over one billion users. And in contrast, TikTok's app has been downloaded 1.15 billion times over the same time period. In the U.S. alone, TikTok was downloaded 80.5 million times compared to IGTV's 1.1 million, according to Sensor Tower.

Data from Apptopia suggests a similar dynamic. Its data show that TikTok's app has been downloaded over 900 million times last year compared to six million times for IGTV. Clearly, Facebook's management had to change things up. Instagram is already bringing in $20 billion of sales for Facebook, but there's still a ton of potential upside left. Investors should watch to see if better incentivizing creators to upload compelling content helps Instagram close the gap with its peers and take its sales to another level.