Please ensure Javascript is enabled for purposes of website accessibility
Log In Help Join The Motley Fool
Free Article Join Over 1 Million Premium Members And Get More In-Depth Stock Guidance and Research
By John Rosevear - Mar 25, 2020 at 10:26AM

The pace of auto sales is still falling.

U.S. auto sales are down sharply in recent weeks, according to analysts, and sales will likely fall further before they improve.

Analysts at Edmunds are forecasting a 35.5% decline in U.S. light-vehicle sales for the month of March versus March of 2019, and a 23.4% decrease from February.

Edmunds' chief analyst, Jessica Caldwell, said that the sales decline accelerated as the month went on. "The market took a dramatic turn in mid-March as more cities and states began to implement stay-at-home policies due to the coronavirus crisis, and consumers understandably shifted their focus to other things," Caldwell was quoted as saying in a press release. 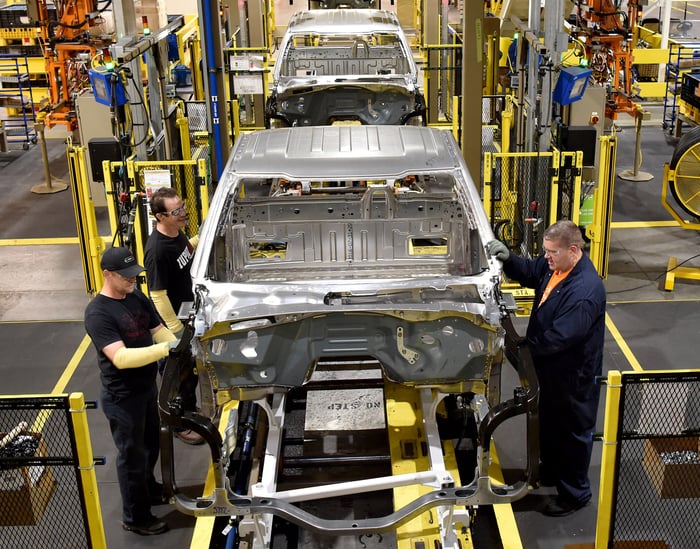 Most U.S. auto factories have shut down in the last week. Image source: Ford Motor Company.

Caldwell estimates that the U.S. light-vehicle SAAR (seasonally adjusted annualized rate), a widely watched measure of the pace of U.S. auto sales, will be about 11.9% for March. If accurate, that will be the lowest level seen since 2011.

Does that mean there are bargains for consumers willing to brave dealers' lots? Not necessarily. Caldwell noted that because most automakers have shut down their factories in North America, inventories of new vehicles are at modest levels.

Automakers tend to offer the most attractive discounts when inventories reach high levels.

Ford Motor Company (F 3.89%), General Motors (GM 5.55%), and most other automakers with factories in the U.S. have suspended production, both to keep workers safe from the novel coronavirus and to match supplies of new vehicles with the abrupt decline in demand.