Please ensure Javascript is enabled for purposes of website accessibility
Log In Help Join The Motley Fool
Free Article Join Over 1 Million Premium Members And Get More In-Depth Stock Guidance and Research
By Billy Duberstein - Mar 26, 2020 at 10:00AM

Though Prosus is a spinoff, it was the largest part of Naspers, accounting for almost all of Naspers' net asset value. That was mainly due to Prosus' 31% stake in Chinese e-commerce giant Tencent Holdings (TCEHY 0.99%), which began as a $32 million investment in 2001, but has since grown into a massive $142 billion asset.

However, Prosus owns a large portfolio of global internet businesses above and beyond just its stake in Tencent. Taken together, it seems poised to benefit from the long-term digital trends likely to be accelerated by coronavirus. Even better, Prosus trades at a significant discount to the value of those assets. 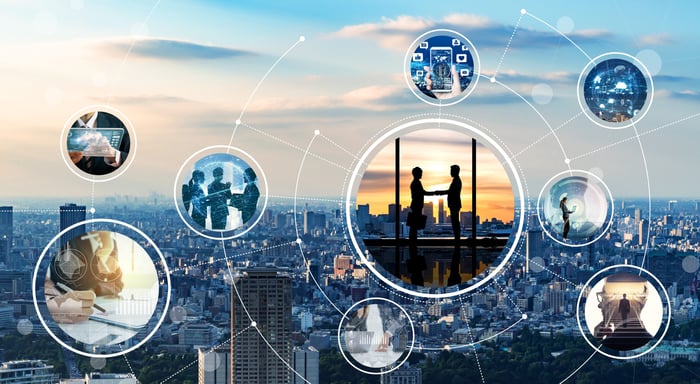 Prosus has a coronavirus-resistant portfolio of digital businesses across the globe. Image source: Getty Images.

Prosus' largest holding by far is its holding in Tencent. In fact, Prosus is worth less than the value of its Tencent stake alone. Leaving the idiosyncrasies of that alone, Tencent's portfolio alone is very well suited to withstand coronavirus.

First, Tencent is the largest online video game publisher and distributor in the world. On its recent earnings release, Tencent reported strength in its core mobile and online gaming empire, and its billion-plus-user social network WeChat also delivered solid advertising results. It's also the largest video-streaming service in China, having recently overtaken rivals. While the company did disclose that its payments and cloud business had slowed due to the COVID-19 breakout this quarter, Tencent also said that its associated marketing costs had come down, keeping profits level, and that it expected to continue to take share in cloud computing once the delay in new installations picked up.

In addition, Tencent owns large 20% stakes in both Chinese e-commerce player JD.com (JD -1.25%), which just posted a solid quarter and seems poised to take market share due to COVID-19, and Meituan-Dianping (MPNGF -2.44%), the largest food delivery app in China, and a rare food delivery service that is actually profitable.

Prosus' next biggest bet is on food delivery. Although that segment is slightly smaller than the Prosus online classifieds segment in terms of revenue, the food delivery segment was growing much faster at 69% growth in the half-year ended in September 2019.

With COVID-19 making it difficult or impossible for consumers across the world to go out to restaurants, it's likely food delivery will get a boost in the current environment. While the coronavirus pandemic will eventually pass, the current period may only bolster what was already a strong growth trend.

Prosus' holdings in classifieds and fintech have a more mixed picture in this environment. While a recession may lead to a slowing or reversal of growth in commerce and payments, the stay-at-home nature of the crisis could actually bolster the war on cash as consumers turn to electronic payments over traditional cash use.

Prosus owns a broad portfolio of online classifieds, including OLX Group, with operations in Russia, India, Brazil, and 35 total markets around the world, as well as Letgo in the U.S. These websites allow people to buy and sell used goods over the internet, even large-ticket items such as used cars, as well as host job listings. Prosus' online classifieds business is the second-largest segment by revenue after Tencent, and grew by 38% in the six months ended in September on an organic basis.

If there's one Prosus business that's suffering right now, it's definitely its 5.6% stake in Trip.com (TCOM 2.92%), formerly known as Ctrip. Prosus was a former investor in MakeMyTrip, which was a leading online travel agent in India, but Prosus exchanged its MakeMyTrip stake for shares in China's Ctrip in April of last year.

That business may be hit quite hard in the current no-travel environment; however, Prosus' stake in Trip.com only equates to around $790 million at Trip.com's current valuation. That's about 0.5% the size of the Tencent investment alone.

That is, of course, a crazy discount, which can be explained by both the discount investors sometimes give conglomerates, as well as other technical factors. Prosus is newly public as of last September and is still majority-owned by Naspers. Those factors have made Prosus underweighted in European indexes as of now.

Management has taken steps to try and close the valuation gap, and I expect its actions, along with the company becoming better-known among investors, could do just that. Meanwhile, its portfolio of internet businesses should mostly weather coronavirus quite well, then thrive once we get to the other side of the crisis.

Could This Stock Really Double This Summer?

Prosus Makes Another Huge Move to Close Its Discount to Tencent