Please ensure Javascript is enabled for purposes of website accessibility
Log In Help Join The Motley Fool
Free Article Join Over 1 Million Premium Members And Get More In-Depth Stock Guidance and Research
By Lou Whiteman - Mar 27, 2020 at 10:05AM

Missiles and missile defense are a growing part of the company's sprawling portfolio.

Lockheed Martin (LMT -0.27%) has been awarded an extra $932 million to supply intermediate-range interceptor missiles to the U.S. and Saudi Arabia. The contract is another sign of the missile and missile defense powerhouse growing inside Lockheed's vast defense portfolio.

The Pentagon on Tuesday announced a contract modification to add the new Terminal High Altitude Area Defense (THAAD) one-shot interceptors. Foreign military sales funds earmarked for the Kingdom of Saudi Arabia will pay for $605 million of the award, with the rest coming from U.S. government funds.

The award comes nearly a year after Lockheed Martin received its first down payment on a $15 billion missile defense system for the Saudis that at the time seemed vulnerable to cancellation due to growing tensions between Saudi Arabia and Western governments. But it now seems clear the THAAD system will be deployed in the kingdom and is a clear priority for U.S. military planners trying to provide global coverage to protect troops and assets in harm's way.

The THAAD system, designed and manufactured by Lockheed Martin using Raytheon radars and Aerojet Rocketdyne boosters, is designed to shoot down short- and medium-range ballistic missiles on their descent. The system is somewhat portable and deployable as needed, and it, along with the Lockheed-built Aegis Ballistic Missile Defense System deployed on much of the Navy's fleet of destroyers, is quickly becoming a vital cog in the U.S. defense strategy.

The THAAD is the primary U.S. deterrent to North Korean rockets from locations in South Korea and Guam and is also been deployed in the United Arab Emirates, Israel, and Romania. A January escalation in tensions between the U.S. and Iran that led to strikes on U.S. assets only reinforced the need to deploy defensive measures in the region. 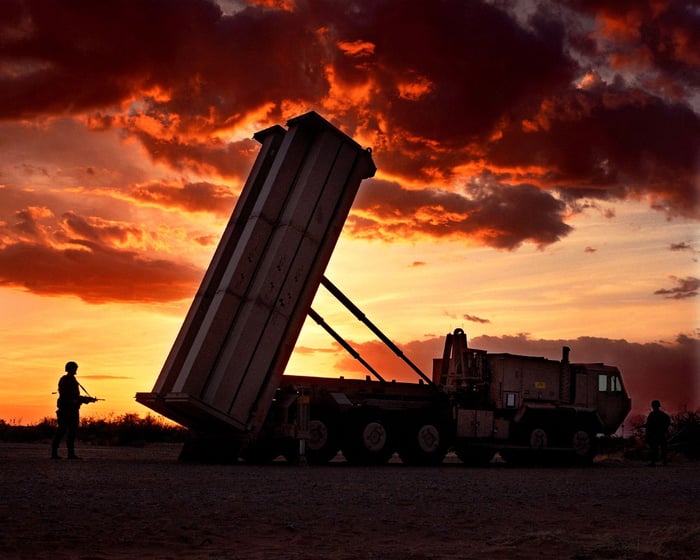 The THAAD was designed to be a regional deterrent, but the Pentagon increasingly is interested in exploring the use of the system against intercontinental threats as well. THAAD units are deployed in Hawaii primarily for testing, but the Army has pushed for funding for a permanent battery there.

If the system's mission is going to increase, it is going to require additional R&D, and that means additional funding. New orders, and in particular international orders like the Saudi deal, are the rocket fuel Lockheed Martin needs to push THAAD higher.

The missile business is on target

Lockheed's Missiles and Fire Control (MFC) unit doesn't get the same amount of attention as the company's airplanes and helicopters, but it is growing increasingly important to the overall investment case for the company. In addition to THAAD and Aegis, Lockheed Martin recently scored an apparent win on the Army's new long-range ballistic missile.

Lockheed and Raytheon were supposed to battle it out for a contract to build the Army's Precision Strike Missile, but according to Defense News, Raytheon is exiting the competition prior to a flight test. If so, that leaves Lockheed Martin as the only contender for a program that is expected to generate more than $2 billion in revenue over the next five years and will likely find plenty of additional interest from allies in the second half of the decade.

The company has also emerged as a leader in hypersonics -- missiles able to travel more than five times the speed of sound -- winning billions in research and development contracts in recent years.

In 2018 the Air Force justified the amount of funds flowing to Lockheed Martin in this area instead of other companies by writing that "no other contractor has this level of design maturity," estimating that the government would have to spend more than $100 million in duplicate development costs just to get another vendor up to speed.

Investors should note that it might take time for some of these programs to hit the bottom line, as there are often margin-sapping development costs in the early stages of a new program award. But over time, MFC has the potential to propel Lockheed Martin higher.

The rap for years against Lockheed Martin was that it was overly reliant on the F-35 Joint Strike Fighter, potentially a trillion-dollar program sure to dominate even the largest portfolio. That criticism remains the single biggest pushback I get from investors when I talk about Lockheed today.

Aeronautics is and will likely remain Lockheed Martin's biggest business, generating about 40% of total sales in 2019. But the MFC business, although half as big in terms of revenue, is growing fast, and offers the company added international exposure and a pipeline of promising products. MFC grew sales by 20% in 2019, tops among Lockheed divisions, and is expected to be the fastest-growing division in 2020.

Roll in Lockheed Martin's space business and its Sikorsky helicopter unit, which is a finalist on two multibillion competitions, and there's a lot to get excited about with Lockheed Martin right now.