Please ensure Javascript is enabled for purposes of website accessibility
Log In Help Join The Motley Fool
Free Article Join Over 1 Million Premium Members And Get More In-Depth Stock Guidance and Research
By Rich Smith - Mar 29, 2020 at 7:13AM

Yes. In fact, when you do the math, SpaceX could be worth even more.

Earlier this month we told you about SpaceX's plan to raise $250 million by selling 1.1 million shares of its (privately traded) stock for $220 apiece. In the weeks since, it seems Musk has expanded his ambitions, filing new documents with the SEC that would double the size of the stock offering (says CNBC) to raise about $500 million in cash.

Musk's plans have changed once already. They may very well change again in light of what's going on in the stock market, and investors' sudden aversion to risk in the age of the coronavirus.

One thing has not changed, however: However many shares Musk ultimately tries to sell, and however much total money he eventually decides to try to raise, the price he is seeking -- $220 a share -- values SpaceX at $36 billion for all of its outstanding shares. 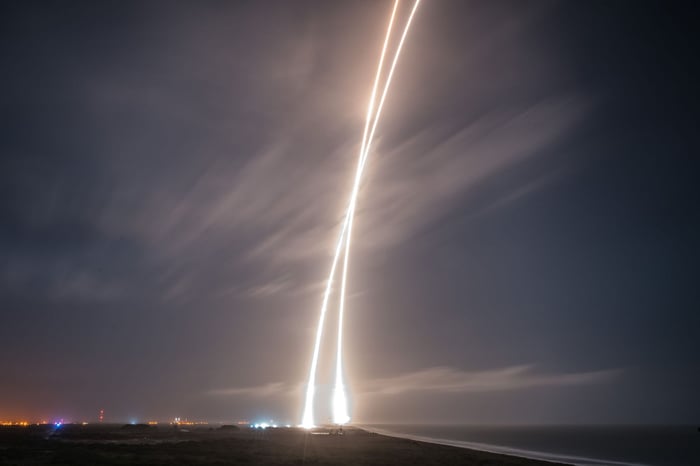 That's a pretty astounding figure. If SpaceX succeeds in selling at its targeted price, then this will mean its stock has more than tripled in value -- going from $10 billion in early 2015 (per data from S&P Global Market Intelligence) to $36 billion today -- in the space of just five short years.

It will also mean that SpaceX is worth about ten times the value of the space launch businesses of Boeing (BA 2.28%) and Lockheed Martin (LMT 0.83%) -- combined.

You see, Boeing and Lockheed's space businesses cooperate through a joint venture known as United Launch Alliance, or ULA. Five years ago -- about the time Fidelity and Alphabet invested $1 billion in SpaceX, valuing SpaceX at $10 billion -- another space company, Aerojet Rocketdyne, helped to affix a value to ULA.

Aerojet bid $2 billion to acquire ULA. Boeing and Lockheed promptly rejected the offer, however -- and no wonder! At the time, SpaceX was launching only about a half-dozen rockets a year, versus a dozen for ULA. Accepting Aerojet's proposition that ULA was worth just 20% of SpaceX's valuation, despite launching twice as many rockets, probably seemed ludicrous at the time.

The more things change, the more valuations change, too

Yet what have the past five years wrought? A rapid ramp-up in the pace of cheap rocket launches at SpaceX, and a corresponding decline in the more expensive launches marketed by ULA.

From six launches in 2015, public records show that SpaceX increased its launch pace to eight flights in 2016, while ULA held steady at 12 flights. In 2017 SpaceX accelerated again to launch eight-een rockets, while ULA decelerated to just eight. SpaceX grew again in 2018, sending up 21 rockets. ULA held steady at eight. In 2019 both companies took a breather. SpaceX launched only 13 times ... which was still more than ULA's five.

And this year? Coronavirus permitting, ULA hopes to launch 10 rockets. But if all goes as planned, SpaceX will launch 36 times.

SpaceX's valuation has changed. Has ULA's?

Admittedly, ULA appears to have held its revenue steady throughout this period of declining launches. In 2018, the most recent period for which data is available, CNBC reported that ULA did $1.8 billion in sales -- the same as its sales back in 2015. SpaceX, however, grew its revenue by leaps and bounds. Despite charging far less per each launch than ULA does, by launching much more frequently, SpaceX's sales roughly doubled between 2015 and 2018, from $945 million to $2 billion.

What does this imply for the companies' respective valuations?

Consider that over the last five years, the value of the S&P 500 has grown 60%. Were ULA's value to have grown in line with that, then this company that was worth $2 billion five years ago might be worth $3.2 billion today. In that case, at $36 billion SpaceX would be worth more than 10x what ULA is worth today.

Yet when you consider that ULA's revenue appears to have enjoyed no growth at all over the past five years, and that its launch pace is slowing, I'm not at all certain ULA's value has increased over the last five years. (Indeed, one could argue that a zero-growth company should be worth less today than it was five years ago.) Estimate even just the $2 billion valuation that Aerojet bid for ULA five years ago, though, and it's arguable that SpaceX is actually worth 18 times -- or more -- ULA's present-day valuation.

That may sound extreme. But between SpaceX's clear advantage in revenue growth, plus new revenue drivers in the form of new models of reusable spaceships, potential crewed mission to Mars, and the construction of a network of internet broadband satellites right here around Earth, there's a strong case to be made for SpaceX shares being worth every penny that investors are lining up to pay for them.