Please ensure Javascript is enabled for purposes of website accessibility
Log In Help Join The Motley Fool
Free Article Join Over 1 Million Premium Members And Get More In-Depth Stock Guidance and Research
By Billy Duberstein - Mar 30, 2020 at 9:02AM

The U.S. and Germany recently set new dates to examine reopening their economies, and an exciting new test could speed the process along.

Many have wondered how much longer the Western developed world will remain on lockdown. This is an especially important question not only for public health, but also for the economy at large. The longer a wide range of businesses operate at near-zero revenue, the more dire the financial straits will be. That could either turn this downturn into a prolonged recession or necessitate even more help from the federal government, beyond the $2.2 trillion it has already passed.

More recently, Germany marked its own date for reexamining its social distance guidelines, one that is later -- though not by much -- than the date President Donald Trump recently gave.

Trump had said that he hopes to have the economy opened back up by Easter, which is April 12, yet basically all experts think that would be a premature and dangerous date to relax the social distancing rules. Fortunately, on Sunday, March 29, President Trump revised that projection, pushing back a potential reopening even later than the Germans have outlined. 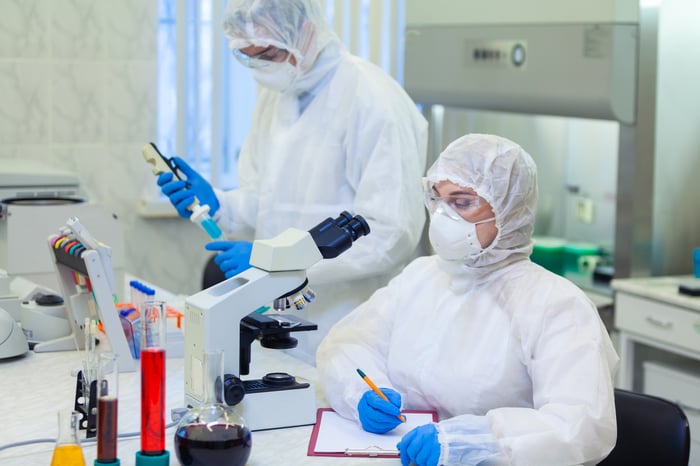 A new test could help isolate COVID-19 and get the economy up and running. Image source: Getty Images.

Last week, Helge Braun, the head of Angela Merkel's Chancellery, said that Germany would not consider relaxing current restrictions on public gatherings in the country until at least April 20. Germany shut down all restaurants, bars, entertainment venues, schools, and other non-essential shops as part of its social distancing guidelines as of March 16.

Braun said, "We will not discuss any relaxing [of restrictions] until April 20, and until then, all measures will remain in place." The justification is that by that time, about three weeks from now, it should be clear that cases are either topping out and beginning to decline or not. Germany's new cases are currently doubling every three to five days, and the government will not even consider opening the country at all until a doubling of cases slows to a rate of 10-14 days, Braun said.

While the April 20 date is one at which German authorities will reassess their policies, it could be a while longer before they actually decide to fully relax restrictions.

Meanwhile, on Sunday, March 29, President Trump went back on his earlier hope to have the economy open by Easter, instead pushing back the easing of restrictions to at least April 30, adding, "We think we'll be well on our way to recovering by June 1."

That new timeline lines up with the one Bill Gates gave about two weeks ago. The new reassessment date would be roughly six weeks since social distancing guidelines were put in place in most U.S. states. Meanwhile, June 1 would mark roughly 10 weeks.

Two weeks ago, Gates had said that it would take roughly six to 10 weeks of social distancing in order to break the chain of transmission and get cases down to a level where we could once again begin relaxing social distance restrictions. My own feeling is that since some states have been late to shut down all public gatherings, it may take the U.S. a bit more time than smaller countries such as Germany or South Korea.

That being said, in order to really get things back to quasi-normal, Gates says we also need a national database as well as widespread testing, as happened in South Korea.

Fortunately, there has been great recent news on the testing front. The Food and Drug Administration just gave an emergency use authorization for a new test from Abbott Laboratories (ABT 1.45%) that can test a person for COVID-19 in just five minutes. That's even better than the test recently released by Danaher (DHR 1.79%) that can give a test reading in 45 minutes.

Tests could also be done on the spot at large gatherings such as sporting events, potentially getting Major League Baseball, the NBA, and other major sports leagues up and going. You could even administer tests for anyone entering a large theme park, helping Disney (DIS 1.84%) or Six Flags (SIX 6.17%) begin to get back to normal. You could also potentially administer tests to anyone getting on a commercial airline or a cruise ship to make sure no one is positive, maybe getting those industries up at least to partial revenue in the medium term.

Of course, that would take millions of tests, and it will likely be a big manufacturing challenge to get that many tests into the system. Nevertheless, the combination of a more realistic quarantine period with widespread testing enabled by the Abbott test could get COVID-19 under control sooner than some think. That would be a game-changer for not only public health, but also the stock market, as it could prevent the lockdown from turning into a severe recession.

Getting more optimistic on the markets and health

Despite the morbid and tragic headlines regarding rising coronavirus cases and deaths -- and there are likely more to come in the weeks ahead -- these positives on the quarantine and testing fronts have brightened the intermediate-term outlook. With the potential for positive therapeutics data coming out in the coming weeks on top of fast testing, recent events have made me much more optimistic that the economy can potentially normalize by this summer once we get past this difficult near-term period. That being said, we all have to be just a little more patient for a little while longer to reap the benefits.