Please ensure Javascript is enabled for purposes of website accessibility
Log In Help Join The Motley Fool
Free Article Join Over 1 Million Premium Members And Get More In-Depth Stock Guidance and Research
By Lou Whiteman - Mar 31, 2020 at 8:46AM

The two companies will face off in two separate competitions with combined contract values approaching $60 billion.

The U.S. Army has narrowed a list of five contenders to build its new attack and reconnaissance helicopter down to two, setting up a showdown between Lockheed Martin (LMT -0.60%) and Textron (TXT 0.74%) that will help determine what the future of vertical lift looks like.

The two companies are now engaged in two separate competitions with combined potential contract awards that could hit $60 billion. And they are offering two very different visions for Army evaluators to consider.

Though the initial awards for now are likely quite small in dollar terms -- the Army requested a total of about $400 million for FARA development for fiscal 2020 -- the Pentagon by fiscal 2024 is expected to pick one of the designs to replace its now-retired Bell OH-58 Kiowa and at least some of its aging Boeing AH-64 Apache fleet.

Sikorsky and Bell earlier this month also got the green light to develop prototypes for the separate Future Long-Range Assault Aircraft (FLRAA), a $40 billion competition to replace the UH-60 Black Hawk helicopter.

Lockheed's Raider was designed with this contest in mind

Sikorsky's Raider X, like the company's separate FLRAA entry, uses a complex counter-rotating coaxial main rotor system. In theory, the dual rotor should provide improved stability and allow the aircraft to travel at higher speeds than a traditional helicopter, but the technology is tough to get right because it is prone to heavy vibration.

Army officials have said for years they want the final FARA winner to be a "knife fighter," and the Raider on paper appears the ideal candidate because of its maneuverability, and ability to quickly penetrate and exit contested territory and move through high-risk environments. 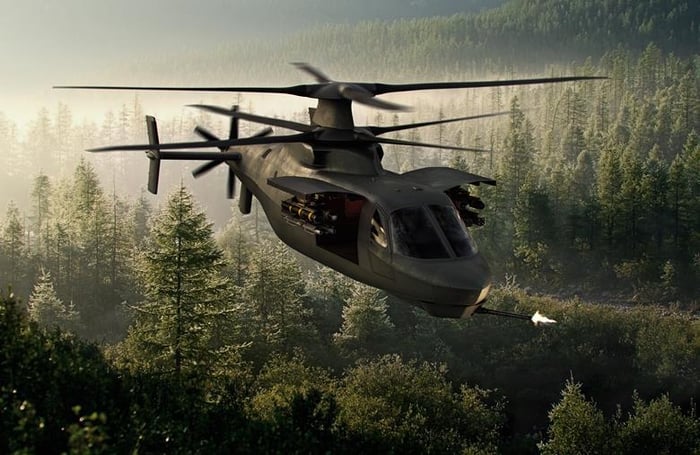 The Raider prototype Sikorsky will submit is slightly larger than a version that the company has been flight testing for more than a year at its Florida test center.

While the basic design has been tested and Sikorsky is growing more confident with the technology by the day, it remains to be seen whether the Raider X will hold up as the Army puts it through the ringer. Some analysts have also expressed concerns about the potential cost per unit for the Raider, though it is uncertain that cost will be a sticking point for government buyers. In selecting down to two finalists, the Army rejected a Boeing clean-sheet design that Boeing championed as being an affordable option.

Bell is taking a more traditional approach with its entry, basing the Invictus on its model 525 commercial helicopter. The military version has a smaller rotor diameter to meet Army requirements that the helicopter be able to maneuver in cities, and a wing on each side to generate extra lift and allow the main rotors to focus on speed.

The 525 is a technical marvel in its own right and expected to be a top seller to commercial customers. It's also ready-made for what the Army needs. The commercial version has state-of-the-art fly-by-wire controls the Army requires for the FARA, and it should be able to hit the performance requirements as well. 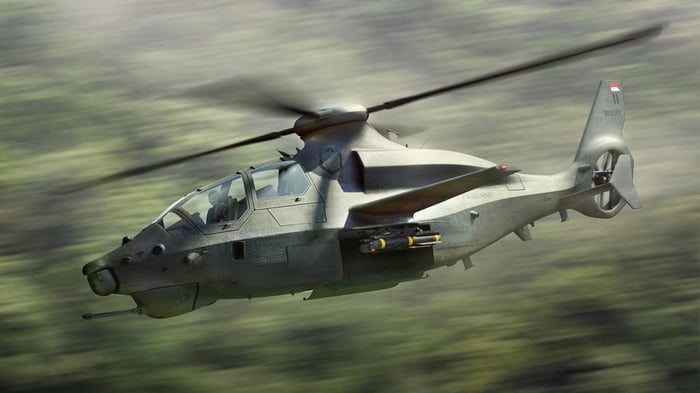 On a call with investors last year, Textron CEO Scott C. Donnelly argued that by basing the Bell entry on the 525, "We think we have some technology that's been validated, that can meet that requirement with a much more cost-effective, much more reliable conventional technology."

The emphasis is on "cost-effective." At a time when the Pentagon is being forced to make choices and prioritize programs, an off-the-shelf option might be of interest to military buyers. And while the Army insists the FARA is a priority, it appears the service is more likely to look for ways to save on this program than it is on the separate FLRAA contest.

Bell has a lot at stake here. Not only did it produce the Kiowa, which this helicopter is set to replace, it was also originally selected to modernize that program before the Army canceled it due to budget constraints. More broadly, its parent Textron is bogged down in a multi-year slump and is in desperate need of a catalyst. Defense sales, and more specifically Bell helicopter sales, appear to be the easiest path to get Textron moving forward.

The Army vertical lift program is entering a defining period. Over the next few years, it will conduct two simultaneous competitions pitting the same two foes against each other, each with radically different designs. If either Sikorsky or Bell sweeps the competitions, that company would be in position to dominate helicopter design and manufacturing for the next decade similar to the way Lockheed Martin has been able to dominate fighter jet design in recent years.

It seems more likely the two companies will split the awards, if only because the Pentagon is loath to see one contractor dominate any particular segment of the market. It appears to me right now that Sikorsky's Raider is the favorite in the FARA competition, and Bell's V-280 is the more likely candidate in the separate FLRAA contest.

That assumes all of the competing designs work as planned and budgetary constraints don't come into play. Textron appears the safer bet in both competitions, as the Invictus is more of a traditional design and should be more affordable than the Raider, and the V-280 has significantly more testing under its belt than the Sikorsky entry.

It's premature to buy stocks based on these initial awards, but investors in both Lockheed Martin and Textron will want to monitor these competitions closely in the years to come.