Expect sluggish results to continue in the quarters to come.

Textron (TXT -0.43%) came into earnings season in need of a catalyst to get investors excited about holding its shares. Fourth-quarter results did come in slightly ahead of expectations, but the company's tepid outlook for 2020 provided little reason for excitement.

Shares of Textron have underperformed the market by more than 33 percentage points over the last year, as the stock has been hit by a series of issues spread across the industrial conglomerate's vast portfolio. 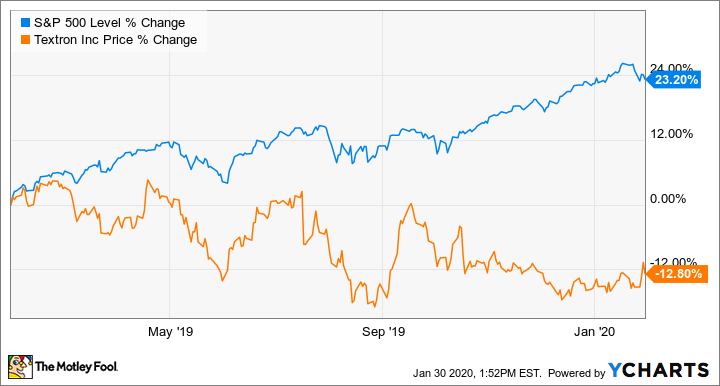 There's still a lot to like about that portfolio, and potential upside if some of the headwinds Textron expects to face in 2020 subside. But increasingly, it appears investors will have to look to 2021 for a full recovery.

Here's a look at Textron's most recent results -- and at what the company expects in the quarters to come.

Earnings beat, but margins were down

On Jan. 29, Textron reported fourth-quarter adjusted earnings of $1.11 per share on revenue of $4.04 billion, beating consensus expectations for $1.09 per share in earnings on sales of $3.95 billion. The results were boosted by 11% growth in aviation revenue and 16% revenue growth from helicopter maker Bell.

Aviation delivered 71 jets in the quarter, up from 63 in the last three months of 2018. Bell delivered 76 commercial helicopters, up from 46 a year prior. However, profit fell year over year at three of Textron's four segments.

Textron blamed the mix of products sold and "an unfavorable impact from inflation, net of pricing" for the profit fall at aviation. As Donnelly notes, the company's new Longitude business jet is entering service, which led to higher costs including rework for modifications mandated for it to receive final certification. Similarly, lower volumes of specialty vehicles hit the bottom line at the company's industrial unit.

In December, Textron announced a plan to bring down costs, including headcount reductions in aviation as an extended period of new product development comes to an end. Textron took the actions in part due to expected declining demand for some of its legacy aircraft platforms, but the move was also a signal that it sees a lull in new product development spending.

The forecast is somewhat backloaded into the second half of 2020 in part due to ramifications of a late-December liquid nitrogen explosion at a Textron plant in Kansas. The incident caused significant damage to Textron's composite manufacturing operations, which the company expects will disrupt production and slow aircraft delivery during the first half of the year.

Textron also faces uncertainty in its Kautex automotive operations, which has a number of plants in China that could be affected for an unknown amount of time by the ongoing coronavirus outbreak. Textron considered selling Kautex last year, but it backed off after exploring options.

The company's Bell unit posted an impressive 2.4 times book to bill at year's end, and Bell looks well positioned to compete for a pair of multibillion-dollar helicopter competitions for the U.S. Army. The Pentagon is expected to select final combatants for the contracts as soon as the current quarter, and while Bell wouldn't generate substantial revenue prior to a final award being issued, staying in the competition would create new opportunities heading into 2021.

Bell, like the business jet unit, is nearing the end of a period of extensive R&D spending to bring new military and commercial platforms to market, and it should be able to drive margins higher in the quarters to come.

Textron is in a multiyear period where results have been somewhat flat, which has led to the stock underperforming. The company has high hopes for aviation and Bell for the second half of this year and heading into 2021, but investors have been hearing talk like that for a while now.

If results stay stagnant as 2020 goes on, I would not be surprised to see an activist push for some sort of a dramatic action to get Textron moving. That could come in the form of a large acquisition -- there has been talk of the company buying the business jet business of Bombardier -- or a call to break up the company or sell some or all of the company's aerospace operations to a larger defense company. It could try again to sell Kautex if the auto industry returns to growth.

On a post-earnings call, Textron CEO Scott C. Donnelly declined comment on M&A activity, but it's clear he believes that after a period of heavy spending on R&D to get new products ready for launch, the company is nearing a windfall where military and commercial helicopters and business jet sales will surge higher.

There are a lot of strong pieces in this portfolio as well as reasons to be optimistic about Textron. However, it seems it's going to require that investors stay patient for at least a couple more quarters.