In the second quarter, Textron (NYSE:TXT) lived up to its reputation as a company that, despite immense potential, has frustrated investors. Shares traded off more than 7% after the company announced revenue that came in short of expectations.

The results continued a disturbing pattern for Textron, which has underperformed the S&P 500 by more than 30 percentage points over the last year. The culprit inside the industrial conglomerate has changed over time, with issues at its snowmobile unit causing trouble last year and aerospace stumbling this time around. 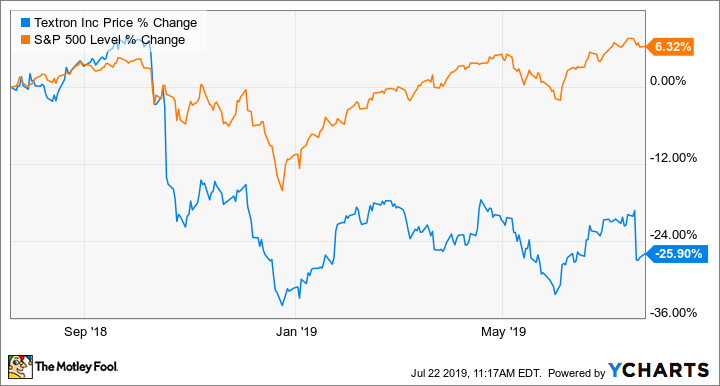 There's a lot to like about the Textron portfolio if the company could get it firing on all cylinders. Alas, in recent quarters, that has not been the case. Here's a breakdown of Textron's latest results and the company's outlook for the future.

But investors were apparently more focused on the $3.23 billion revenue, which came in 7% under consensus, and perhaps noted that the earnings beat was aided by nearly $0.10 per share in one-time benefits from a business jet training joint venture and lower-than-modeled corporate expenses. 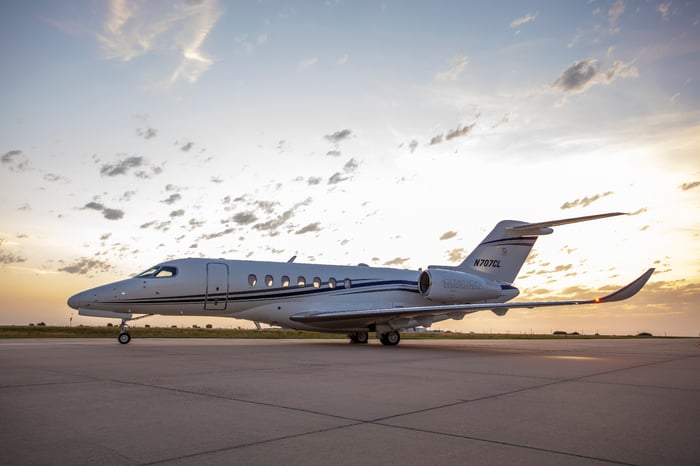 Aviation was responsible for the weakness. Aviation sales fell 12% to $1.123 billion in the quarter due to lower volumes. The company delivered 46 business jets in the quarter and 34 turboprops, compared to 48 bizjets and 47 turboprops during the second quarter of 2018. The unit's book-to-bill ratio was a tepid 0.92 times.

CEO Scott C. Donnelly, during a call with investors, blamed the slowdown on macroeconomic issues but said those headwinds have since receded.

Beginning in late May, we experienced lower order activity across our product lines, largely attributable to the uncertainties around tariffs and concerns about economic growth, which cause disruptions in both our domestic and foreign markets. Since then, we believe these uncertainties have largely diminished as we've seen the Mexico tariff issue resolved, stronger economic indicators and a Fed bias toward further interest rate cuts, which have improved customer outlook. Our view going into the third quarter remains positive and we expect deliveries and order to ramp throughout the second half of the year, driving revenue growth at Aviation.

Textron's aviation business is also impacted by a strong dollar, since many of the turboprop sales are to international markets.

Elsewhere, there were signs of improvement. Bell Helicopter reported revenue down 7.2% year over year on lighter commercial deliveries, but margins came in stronger than expected at 13.4%. Similarly, Textron's industrial unit showed a sales decline due to a divestiture, but margins beat expectations. Donnelly said that Textron's work to improve its specialized vehicles operations, which were the source of last year's troubles, has resulted in lower costs, more efficient manufacturing, and better sales channels.

The ingredients for growth are still in place

Aviation was supposed to be the key driver to push Textron higher in 2019, so it isn't a surprise that the market took a dim view of the mixed quarter. The entire business jet market has been in a prolonged slump, but in recent quarters, both Textron, owner of the Cessna brand, and General Dynamics' Gulfstream unit have hinted that a recovery has begun. So the fall-off in Textron aviation sales in the quarter and the weak book-to-bill were a deflating surprise.

While the quarter came in short of expectations, there is still reason to hope the business, and more broadly Textron, is poised to gain altitude.

For now, Textron could be hobbled by selling a somewhat dated portfolio into the business jet recovery, but that should change soon. Cessna's Citation Longitude midsized business jet, an updated design that was supposed to drive revenue gains in 2019, is still awaiting certification after a series of delays, including January's partial government shutdown.

Donnelly said, "We continue to make good progress on the certification efforts," reiterating his previous goal of seeing deliveries of the plane begin this year. Aviation ended the quarter with a $1.9 billion backlog, and Bell has a backlog of about $6 billion.

"We remain on track for growth in the second half of the year," the executive said.

Looking out into 2021, Cessna is continuing development of the 19-seat SkyCourier turboprop -- which already landed FedEx as a launch customer -- and the single-engine Denali turboprop designed for fractional and charter operators.

Time for Textron to show what it can do

Textron's outlook appears solid, but investors have been hearing that for a while now. It seems every time the company has looked well positioned to outperform lately, it has instead produced an unexpected downside surprise, leaving the market skeptical that earnings will grow to near $4 per share in 2020 as hoped.

The recent sell-off has made Textron an intriguing buy, with the company currently trading at less than 1 times sales and about 10 times earnings, well below other industrial conglomerates with an aerospace tilt like Honeywell International or United Technologies.

Assuming things go well with the Longitude and Textron's other businesses perform to plan, the company should be an outperformer by the second half of 2020 and into 2021. On the military side, a few of Textron's programs are aging, but there is potential unanticipated upside if one or more of Bell's designs involved in ongoing competitions is selected. Even if they aren't, commercial demand for the Bell 525 should help ease the blow of older programs phasing out.

It feels like a logical time to buy in, but given Textron's recent troubles, I'm still hesitant until I can see another quarter's worth of results and be assured no new unexpected issue has popped up. Given the company's history, I'd rather stay on the sidelines a bit longer, even if it means missing out on a bargain price.