March sales numbers are coming in, and they're grim.

Shares of automakers Ford Motor Company (F -2.60%) and General Motors (GM -1.24%), as well as those of online car-shopping service TrueCar (TRUE -1.83%), were all falling on Wednesday after some automakers reported dismal U.S. sales results for the month of March.

Here's where these three stocks stood as of 2:30 p.m. EDT, relative to Tuesday's closing prices:

Auto investors already knew that March was a tough month for U.S. auto sales. Most U.S. auto factories, and many dealerships, shut down in mid-March as state and local authorities ordered social-distancing measures intended to slow the spread of the COVID-19 virus. 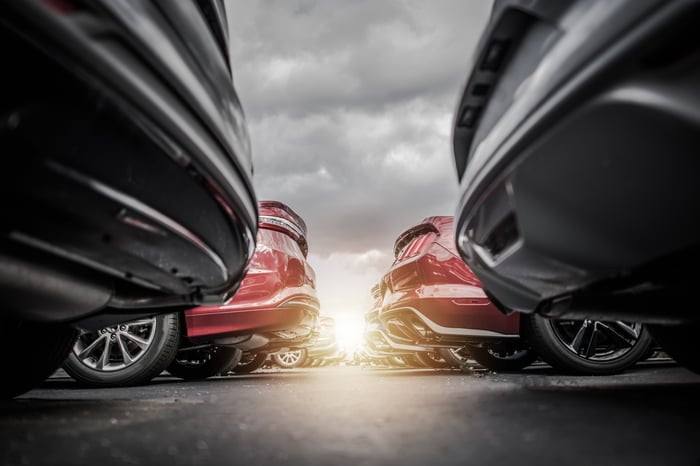 While many auto dealers are still offering online sales, they don't seem to have found a lot of buyers in March. That's no surprise: Many Americans suddenly found themselves without a job, or at risk of losing one, as much of the economy shut down amid the coronavirus pandemic.

But it was still eye-opening to see the first March sales numbers released on Wednesday. Remember, most were still going full-speed at the beginning of the month:

GM didn't break out its March sales results, but it did say that its sales dropped 7.1% in the first quarter of 2020, and that it experienced "significant declines" along with the broader industry in March.

Ford will report its first-quarter sales tomorrow, but it's already clear how the month of March went.

It doesn't take a rocket scientist to see what this means for all three companies: If March was this bad, April is going to be positively awful.

For Ford and GM, this mostly reinforces what we already knew. With their North American factories shut down for at least a few more weeks, automakers aren't generating much of any revenue in the U.S. right now.

But the numbers we saw on Wednesday morning confirmed something else, something that's particularly worrisome for TrueCar investors: Very few people are buying the vehicles on dealers' lots right now. If people aren't buying new cars, then TrueCar isn't getting much of any revenue, either.

While Ford and GM are burning a lot of cash right now, both have enough money to hold out for quite a while. But for TrueCar, which has been struggling, this is becoming a business-threatening crisis.