Positive news on the novel coronavirus brings hope for an end to the recession.

For the second day in a row, stock markets are surging today, with the S&P 500 up more than 2% in late morning trading. Buoyed by positive news of two straight days of "effectively flat" COVID-19 death numbers in New York City, a slowing death rate in southern Europe, and presidential pronouncements that there's "light at the end of the tunnel" in the U.S., investors are beginning to peer into the future and wonder if the coronavirus pandemic might eventually end, and when the global economy will pull out of its recession. 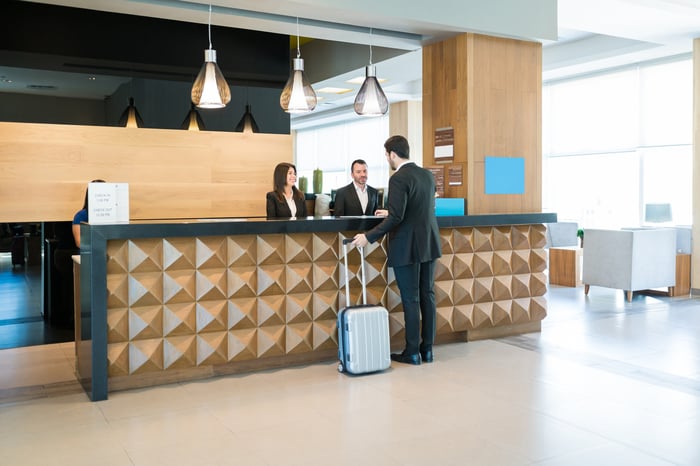 All three of these stocks suffered from a wave of hotel closures in the early days of the pandemic. Disney, which operates a global entertainment empire spanning movies, television networks, and amusement parks, gets a large part of its business from operating resort hotels that feed into those parks -- and those hotels all got shut down in mid-March. Now, the hope is that they may slowly begin to reopen once the crisis has ended.

But a vague hope that the pandemic will end at some point isn't the only reason these stocks are moving. In the cases of Marriott and Hyatt, at least, an analyst also weighed in today, with pronouncements that may help to explain their stock price movements.

At Marriott, an upgrade from equal weight to overweight from Wells Fargo probably explains why that stock is outperforming the others. According to the analyst, 2022 estimates make Marriott stock a more attractive value than peer hotel chains. Conversely, Wells Fargo sees Hyatt stock as overpriced at its present valuation of $49 a share. (Wells thinks the stock is worth only $48.)

It seems strange to think that one analyst's opinion could be the reason that Hyatt stock, up more than 16% at one point today, swiftly gave back most of its gains. Then again, sentiment appears to be the driving factor behind most stock price movements these days, and in an environment like this one, words have consequences -- at least when spoken authoritatively by analysts.

Even with Hyatt shares trading at an apparently low valuation of just six times trailing earnings, investors remain very much in the dark about what future earnings might look like. They're looking to Wall Street's analysts for guidance on that point, and reacting quickly to the slightest hints of analytical disapproval.

The moral for investors: Expect continued volatility. Until we get some hard data on what's really happening out there in the economy, stock price movements will remain choppy, and analyst upgrades and downgrades will probably carry even greater weight than usual.