Please ensure Javascript is enabled for purposes of website accessibility
Log In Help Join The Motley Fool
Free Article Join Over 1 Million Premium Members And Get More In-Depth Stock Guidance and Research
By John Rosevear – Apr 8, 2020 at 11:05AM

Worries about the coronavirus hurt the jean giant's shares.

Shares of jean giant Levi Strauss & Co. (LEVI 5.26%) had a rough March as investors scrambled to react to the mass shutdowns required to slow the spread of COVID-19.

Levi's shares fell 26.8% in March, according to data provided by S&P Global Market Intelligence -- worse than the S&P 500 Index's 12.5% decline, but not nearly as bad as some rivals'. 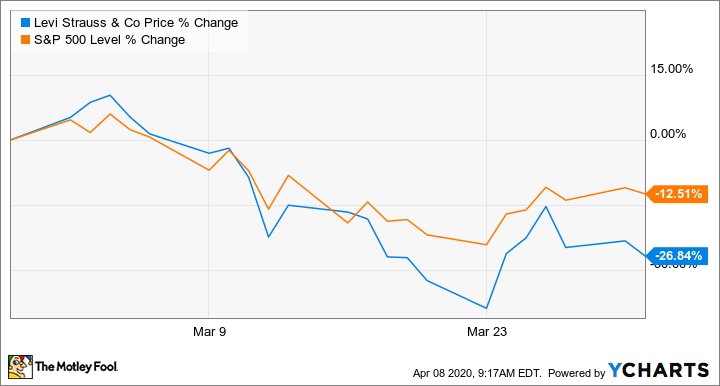 Like other companies with a significant brick-and-mortar presence in China, Levi's was affected by the coronavirus outbreak early in 2020. The company closed its stores in China in mid-January as the country imposed strict social-distancing measures to combat the outbreak, and most of those stores remained closed through the end of March. 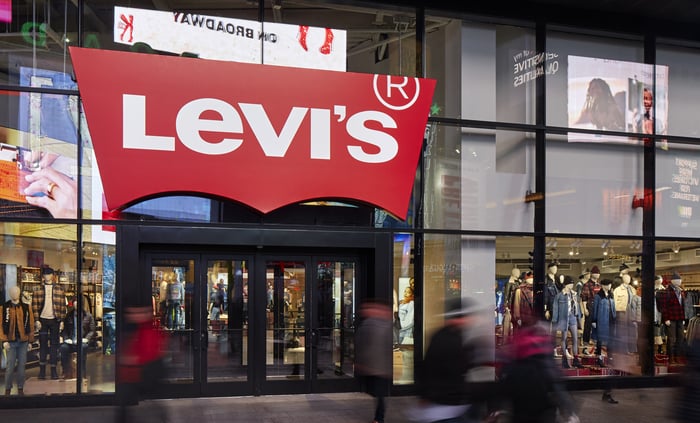 As the virus spread around the world, so did Levi's store closings. The company said on March 16 that all of its company-owned retail stores in the U.S. and Canada would close through at least March 27 in response to health officials' guidance to help slow down the coronavirus pandemic. Levi's has continued to pay its store employees in the U.S. and Canada for their usual scheduled hours, and its online operations (including its fulfillment centers) have remained open.

(As of April 8, those U.S. and Canada stores remain closed, as do most of Levi's stores in Europe. While its stores in China, Korea, and Japan have just begun to reopen, most of its other stores in Asia remain closed.)

On April 7, Levi's reported its earnings for the quarter that ended on Feb. 23, and they were good: Adjusted earnings per share of $0.40 on revenue of $1.51 billion beat Wall Street's estimates of $0.35 per share on $1.47 billion in revenue.

Levi's ended that quarter with $1.8 billion in total liquidity, likely enough to ride out the pandemic. But for understandable reasons, it has withdrawn its 2020 guidance to investors that it issued in January.