The answer depends on whether you're a prudent or a fearless investor.

You've probably heard about the impressive coronavirus-induced surge in the use of video communication solutions such as Zoom Video Communications' (ZM -0.12%) Zoom Meetings and Cisco Systems' (CSCO -1.19%) Webex. That boost may become a secular long-term growth trend as users are discovering the benefits of these tools.

However, that doesn't mean you should invest in both companies to capture that opportunity. These tech players correspond to very different investment strategies.

Zoom CEO Eric S. Yuan isn't new to video communications. He's one of the founding engineers of Webex, which Cisco acquired in 2007. He founded Zoom in 2011 after he left Cisco when he became frustrated with the tech giant's slow response in simplifying Webex. With Zoom's emphasis on making users happy, he seems to have built a video solution that proves him right. And there's a lot for investors to like, too.

Revenue grew to $622.7 million during fiscal 2020, up 88.4% year over year thanks to the simplicity of the product. And at the beginning of April, the company revealed that the number of daily meeting participants had exceeded 200 million in March, up from just 10 million at the end of December. Granted, part of this explosive growth may be due to Zoom's decision to offer some services for free during the coronavirus pandemic. Still, even if a small percentage of these users become paying customers, the future looks bright for the company. In addition, Zoom is expanding its market with a phone product -- Zoom Phone -- that integrates with its video solution.

In contrast with many high-growth tech players, Zoom is profitable thanks to its reasonable operating expenses. Net income under generally accepted accounting principles (GAAP) reached $25.3 million during fiscal 2020, up from $7.6 million the year before.

However, Zoom's lofty enterprise value-to-sales ratio of 46 indicates that the market expects these impressive results to continue over the long term -- and that's a risky bet.

Zoom's sudden popularity came with extra scrutiny. Researchers revealed that the company has neglected cybersecurity best practices and misled its customers. For instance, it advertised that its products offered end-to-end encryption, which means the company claimed it had no possibility to decrypt and see its customers' communications, but that was not always true. As a result, several organizations limited or even prohibited the use of Zoom's products.

In addition to these short-term security challenges, the competition isn't standing still. Microsoft announced a strong increase in the number of users in its collaboration platform Teams, and it made Skype available for free without any download or signup. 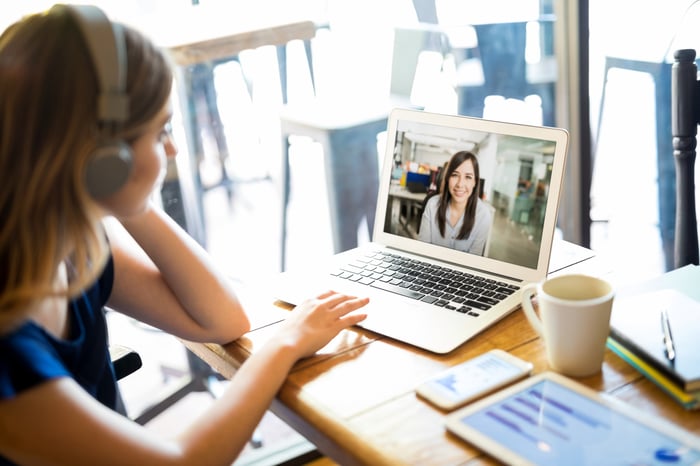 Cisco is also experiencing a surge in the use of its video communication solutions, which may also be linked to its coronavirus-induced free offering. Given management's disclosures about the increasing use of Webex, video communication seems like an important business for the company.

Yet it represents a small part of its activities. During the last quarter, revenue dropped to $12.0 billion, down 4% year over year. But the company's applications segment, which includes communication solutions and other technologies such as Internet of Things (IoT), represented only 20.7% of revenue.

In fact, Cisco mainly sells networking and cybersecurity products, software, and services. And with its worldwide presence and wide portfolio, the company is exposed to the global economy. In addition, given its huge scale, Cisco can't come close to Zoom's explosive revenue growth.

However, thanks to its large scale and its dominant position in the networking market, the company generated $14.9 billion of free cash flow last year, up from $12.8 billion the year before. Besides, Cisco pays an attractive dividend that currently yields 3.5%, and given the payout ratio of 54%, that dividend seems safe.

Given these characteristics, the company's modest enterprise value-to-sales ratio of 3.4 should grab the attention of prudent investors.

Both companies can endure a potentially prolonged recession without financial difficulties thanks to their large cash balances -- relative to their respective scales -- in excess of debt. Also, they should both profit from the secular increase in video communications.

However, Cisco and Zoom correspond to opposite investment strategies. Prudent investors might prefer Cisco for its reasonable valuation, strong free cash flow, and safe dividends. In contrast, Zoom's lofty valuation should appeal only to the fearless investors who remain convinced the company will keep on outgrowing its giant competitors, such as Cisco and Microsoft, over the long term.