Please ensure Javascript is enabled for purposes of website accessibility
Log In Help Join The Motley Fool
Free Article Join Over 1 Million Premium Members And Get More In-Depth Stock Guidance and Research
By John Rosevear – Apr 21, 2020 at 11:18AM

The two will make units for hydrogen-powered electric heavy vehicles, but not for several years.

Daimler (DMLR.Y 5.47%) and Swedish truck-maker Volvo (OTC: VOLVY) have agreed to form a joint venture to produce and sell hydrogen fuel cell systems for heavy-duty trucks and other large vehicles, as the high costs of green vehicle technologies -- and the coronavirus crisis -- accelerate consolidation in the global auto industry.

"The common goal is for both companies to offer heavy-duty vehicles with fuel cells for demanding long-haul applications in series production in the second half of the decade," Daimler said in a statement. "In addition, other automotive and non-automotive use cases are also part of the new joint venture's scope." 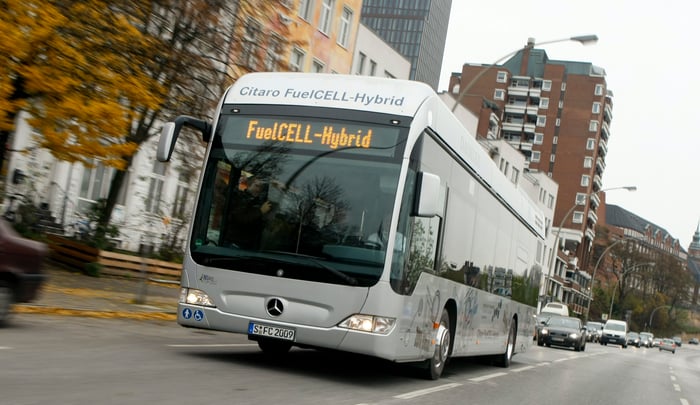 Under the deal, Daimler will consolidate its existing fuel-cell research-and-development efforts, located in Nabern, Germany, into the new joint venture. Volvo will acquire a 50% stake in the company for about 600 million euros.

Fuel cells are devices that chemically convert the energy in hydrogen gas to electricity, emitting only water vapor. They are expensive to manufacture, and hydrogen refueling stations are scarce; two factors that, so far, have made them uncompetitive with battery electric vehicles for consumer passenger applications.

But the business case is different with electric heavy trucks, which require very large and expensive battery packs to provide performance and range comparable to current diesel-powered models and take hours to recharge with current technologies. Fuel cells can deliver equivalent performance with less weight and bulk, and fleet operators can provide hydrogen refueling stations along major routes to "recharge" the trucks quickly (by refilling their hydrogen tanks) when needed.

Companies including Nikola Motors and electric-carmaker Tesla (TSLA 2.90%) have announced plans to enter the electric-heavy-truck space in the next few years.

The parties expect to finalize the joint-venture agreement by the end of the third quarter, and to close the deal by the end of 2020, Daimler said.