The biotech applied for approval to move to phase 2 testing, which it expects to start this quarter.

Clinical-stage biotech Moderna (MRNA 0.70%) announced that it has submitted an Investigational New Drug (IND) application to the U.S. Food and Drug Administration (FDA) to move its COVID-19 vaccine to phase 2 and late-stage studies if supported by safety data from a phase 1 trial underway now.

Moderna has received feedback from the FDA on the design of the study and expects to begin the phase 2 trial of its vaccine candidate mRNA-1273 in the next two months. The trial will enroll 600 participants, who will be randomly assigned to groups receiving a placebo or one of two dose levels of the vaccine, given as two different vaccinations 28 days apart. Half of the participants will be between the ages of 18 and 55 and the other half 55 or older. Participants will be followed for a year after the last vaccinations. 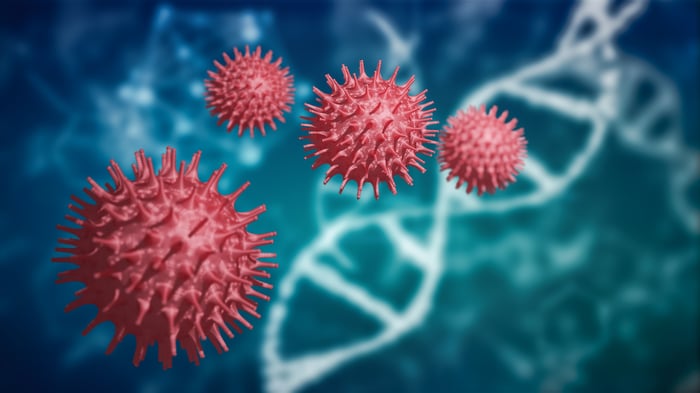 Moderna's candidate to fight the SARS-CoV-2 virus is currently in a phase 1 study in partnership with the National Institute of Allergy and Infectious Diseases (NIAID), and is based on the company's proprietary technology centered on messenger RNA, or mRNA. That study initially enrolled 45 healthy adults and is currently expanding to enroll three cohorts of older adults between 56 and 70 and three cohorts of adults aged 71 years and above.

The company was fast out of the gate in the race for a vaccine, completing the first batch on Feb. 7 and dosing the first test subject on March 16. If results from the first two phases of trials are positive, Moderna said that it could begin phase 3 studies in the fall of 2020.