Please ensure Javascript is enabled for purposes of website accessibility
Log In Help Join The Motley Fool
Free Article Join Over 1 Million Premium Members And Get More In-Depth Stock Guidance and Research
By Rich Duprey - Apr 29, 2020 at 11:41AM

A quarter that could have shown promise now presages even worse results to come.

First-quarter motorcycle sales for Harley-Davidson (HOG -0.81%) were as terrible as you'd expect, plunging 18% worldwide from the year-ago quarter and down more than 15% in the U.S.

What might be more surprising is that the bike maker said quarter-to-date domestic sales had actually been up almost 7% before the pandemic struck in earnest in mid-March, which means that over the ensuing two-week period they all but disappeared.

It doesn't bode well for Harley-Davidson's second quarter, which is typically its biggest sales period, and perhaps for several quarters to come. That's why the motorcycle giant has undertaken an updated action plan that it is calling The Rewire. 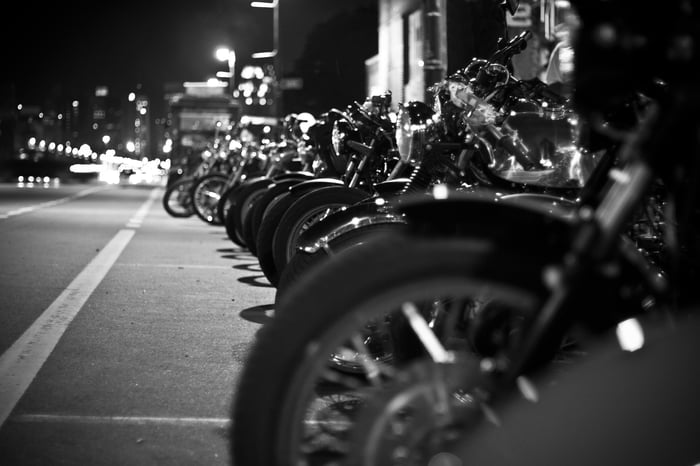 Another tough turn for motorcycles

Harley-Davidson's revenue fell almost 6% to $1.3 billion in the first quarter while net income plunged 45% year over year to $69.7 million, or $0.45 per share, as the COVID-19 outbreak sapped sales globally. "Retail sales fell significantly in the back half of March due to consumer concerns and approximately 50% of our dealers being temporarily closed for motorcycle sales in the U.S. due to COVID-19. ... International retail sales were down 20.7% in the first quarter as COVID-19 fears and dealer closures spread from Asia to Europe to Canada and Latin America," CFO John Olin said during a conference call with analysts.

The company sold just 40,400 motorcycles worldwide in the period, fewer than during the depths of the Great Recession. U.S. sales collapsed to just over 23,700 bikes, or less than 59% of the total.

Harley's goal of making international sales account for half of the total is a good way toward being achieved, though undoubtedly not in the way the company was hoping. Yet it also appears that the crisis is serving as a wake-up call to management, as acting President and CEO Jochen Zeitz said big changes are on the way:

The crisis has provided an opportunity to reevaluate every aspect of our business and strategic plan. We have determined that we need to make significant changes to the company; to our priorities, to our operating model and to our strategy to drive more consistent performance as we emerge from this crisis. We will reduce complexity, sharpen focus and increase the speed of decision-making.

Although Zeitz didn't reveal details, promising to expand more on what Harley intends to do in its second-quarter update, the company did unveil some broad strokes for what it will undertake.

The Rewire is Harley's new strategic plan for the next five years. It incorporates some of what it outlined in its More Roads roadmap of two years ago, but now focuses more on key markets and products that drive the bike maker's profitability and growth potential.

While Harley-Davidson isn't giving up on its electric motorcycle dreams, noting it will continue to advance their development, the plan calls for the company to return its focus to what made its brand great while narrowing where it makes investments. Notably, it calls for "building on Harley-Davidson's strong position in the U.S."

Going back to basics

That seems like a marked departure from the vision former CEO Matt Levatich had guided the company toward, as he saw international growth as Harley's future. The plan also calls for expanding the company's "profitable iconic motorcycles to excite existing customers," even as it remains committed to its new middleweight bikes, the Pan American adventure touring bike and the Bronx streetfighter motorcycle.

The investments call for focusing on the markets that offer the most potential and the motorcycle models that can sell, and creating a corporate structure that once again takes into account its dealers, which have long been the heart of the company's sales efforts, but which were often seemingly ignored under Levatich's more top-down managing style.

The Rewire strategy is certainly no magical elixir to change what's been ailing Harley-Davidson, and Zeitz's earnings statement acknowledges that "COVID-19 has dramatically changed our business environment and it is critical we respond with agility to this new reality."

Getting people onto motorcycles again won't be easy. Harley notes that its financial services division saw a 5% increase in revenue, but suffered a 61% plunge in operating profits as it needed to massively increase its provision for loan losses.

The bike maker also slashed its dividend by 95%, down to just $0.02 per share, and halted all discretionary stock buybacks as it seeks to conserve cash.

It was an ugly quarter for Harley-Davidson, and investors should brace for what may evolve into an even worse performance over the next few quarters.