Hours after D.R. Horton beat earnings, Meritage did, too.

Just hours after D.R. Horton posted its analyst-thumping sales and earnings results for its fiscal second quarter of 2020 yesterday, smaller homebuilder Meritage Homes (MTH 1.93%) had some good news of its own to share.

Reporting after close of trading Tuesday, Meritage said its fiscal first-quarter earnings (the two companies operate on different calendars) were far better than the $1.28 per share analysts had predicted. In fact, earning $1.83 per share on sales of $890.4 million, Meritage beat earnings by 43%, and beat on sales as well. 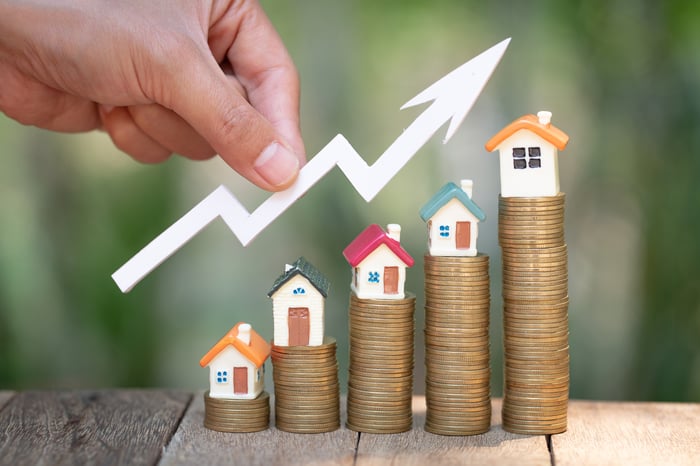 Relative to last year's first quarter, Meritage grew its sales 27% and its earnings 182%, even in the face of the coronavirus pandemic. Moreover, it achieved these results despite selling slightly cheaper homes (the average sales price was down 3%), but selling vastly more homes -- up 23% year over year.

That's the good news, and that's what's driving the stock today. Now here's the bad news for the quarters to come:

Meritage says its home sales were strong all through early March, but were "followed by significant declines through the end of the month, which have continued to deteriorate in April as the coronavirus pandemic spread across the U.S. and severely impacted the economy." Now, CEO Steven J. Hilton says, "we are expecting much weaker results for at least the next couple of quarters due to large parts of the economy being shut down, causing record job losses, fear and uncertainty about the future."

In a situation like this, it's unsurprising that Meritage gave no specific guidance for what investors can expect in Q2 and beyond. Still, management said it is "tightly managing cash flows by deferring the acquisition and development of most new communities and [has] pulled back on all discretionary expenses." The company is also conserving its "nearly $800 million" cash hoard. In management's opinion, "Meritage remains well positioned to continue operating through this difficult period."

Despite the worrisome forecast for future sales, investors appear to agree with that assessment.