By supplying the shopping cart and offering a free, ad-supported streaming service, the company is positioning itself to collect lots of digital consumer data.

In the midst of the coronavirus pandemic, it was easy to miss media giant Comcast's (CMCSA 1.52%) announcement. Most of the few investors who caught it likely responded with a collective "huh?" Why is this television and entertainment powerhouse getting into e-commerce at all? There's a method to the madness though, and any other name that relies on detailed consumer data -- including web companies like Alphabet (GOOG 2.36%) (GOOGL 2.39%) and Facebook (META 1.70%) -- would be wise to take note. This new venture from Comcast's NBCUniversal unit has a lot of potential, even if it waits the end of a very long runway.

This tool, available to advertisers, is a "new commerce engine that grants any business-local or national, newly or originally direct-to-consumer-the ability to set up shop in one place and instantly reach nearly all Americans with a single integration." 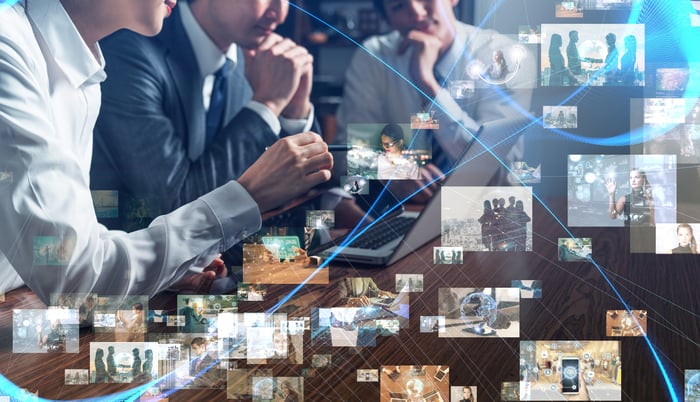 With NBCUniversal Checkout, marketers can still add a barcode to the bottom of a television commercial that consumers can use to be whisked away to a product or purchase page using their smartphone's camera. However, the same platform can do so much more.

Brands can also add the shopping cart to an NBCUniversal webpage about a particular product, or even link Checkout to television or web content that may not be specifically about their product, but about the product category. The tool itself can even be used to improve the reach of a client company's social media efforts by driving more prospective shoppers to a company's social media posts.

For instance, earlier this year, the Today show featured several summertime products consumers might want to know about. To capitalize on the potentially piqued interest during the segment, a barcode appeared at the bottom of the television screen that sent shoppers' smartphones to a Walmart (WMT 1.85%) listing of each featured product. In the future, advertisers will pay for this sort of sales-driving attention.

That's not the most interesting aspect of NBCUniversal Checkout, though. Neither is the fact that the platform works with content not necessarily owned by NBCUniversal. No, most interesting about this evolution of Comcast's existing advertising platform is that NBCUniversal Checkout is a digital shopping cart operated by Comcast, as opposed to the previous approach of simply using a bar code to send a shopper to an advertiser's own online shopping cart.

With this development, Comcast is now positioned to collect consumer data it wasn't in a position to collect before.

The next logical step for One Platform

Actually, that's not entirely accurate. Comcast has been moving in this direction at a respectable pace since last year, when it finally announced it would be launching its own streaming video platform that we now know as Peacock.

Peacock is something of a standout in that it's going to be the first no-cost, ad-supported streaming video option from a major network name. The catch, so to speak, is being able to supply those advertisers with highly detailed, granulated data about each and every viewer that can't be achieved through linear (traditional cable) television.

Introduced in February of this year, One Platform expands the company's

... linear optimization solution to include Nielsen demo target audiences and leveraging market-leading technology and data science from 4C Insights to introduce a first-to-market cross-platform optimizer for unduplicated audience reach across linear and digital.

Perhaps most important, though, is that One Platform means every ad viewing can be "data-informed." And why not? Whereas linear television broadcasts are one-way communication, streaming is (quietly) a two-way conversation between your router and the supplier of whatever digital content you decided to pipe into your home. It only makes sense to collect whatever data can be reasonably and fairly collected, and then use that information to build tailor-made advertising campaigns.

Perhaps the most important achievement Comcast is about to accomplish by adding NBCUniversal Checkout to One Platform, though, is the one neither the company nor anyone else is talking about. By supplying the online shopping cart, Comcast is perfectly positioned to connect what you watch on television with what you browse on the web using your smartphone, tablet, or computer.

Consumers mostly understand that their internet service provider and the search engine -- like Google or Yahoo! -- of their choice both keep track of their browsing history. That data is then used to deliver more relevant ads.

Along those lines, NBCUniversal Checkout connects dots that had been previously difficult to connect: your television viewing habits and your online browsing or shopping habits. The company will be able to connect your Wi-Fi devices to what you're streaming on TV by using your internet connection's one digital address. Pausing a streaming digital video or using a smart television to actually "shop" shoppable television content will also tell the company more about its viewers' interests, as will the items shoppers ultimately remove from their shopping carts. Smart shoppable TVs only add to the data trove.

And don't think for a minute this sort of capability is no big deal. A Facebook IQ report determined that within the United States, only 53% of the time spent watching TV actually involved looking at the screen. The other 47% of the time was spent on a smartphone, which 94% of us have in hand while watching television. Simultaneous watching and browsing is the new norm.

Creepy? Perhaps a little. It's not as if other tech giants aren't just as invasive, though, even if in different ways. It also remains to be seen to what extent Comcast can or intends to pry into your digital life. There's certainly risk in pushing that envelope too hard. Just ask Facebook, which is now facing regulatory pushback that was rooted in consumers' privacy concerns.

It stands to reason, though, that Comcast is going to become just as much of a data-collection machine as companies like Alphabet and Amazon are, and it has plans to leverage that data to maximize its advertising business in ways that benefit marketers beyond conventional TV advertising itself.