Please ensure Javascript is enabled for purposes of website accessibility
Log In Help Join The Motley Fool
Free Article Join Over 1 Million Premium Members And Get More In-Depth Stock Guidance and Research
By James Brumley – Apr 30, 2020 at 8:40AM

Verizon's voice and fiber customer base continues to shrink significantly, while wireless growth is uneven at best.

Given its history and the fact that rival AT&T (T 0.79%) did the same during the same quarter, it came as no real surprise that Verizon (VZ 0.93%) lost cable television subscribers for the three-month stretch ending in March. The cord-cutting movement remains a rather indiscriminate one, reducing cable headcounts at powerhouses like Comcast (CMCSA 1.55%) just as easily as it can pick off customers of the tiniest cable names.

Verizon differs from other names in the telco business, however, for one simple reason: It's doing the least to stave off the exodus of television subscribers, perhaps because it's in the poorest position to shore up its TV numbers and give them a reason to stay. Maybe now would be a good time to give television another shot. 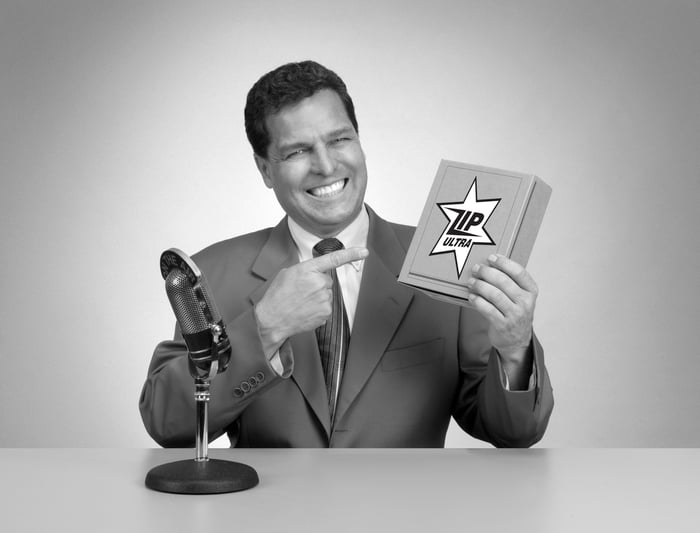 The new bundle seems to work

The jury is still mostly out on the potential of melding telecoms with entertainment providers. AT&T has struggled to make its 2015 acquisition of DirecTV pay off and has been criticized for shelling out $85 billion to finally acquire WarnerMedia in the meantime. Conversely, investors weren't entirely sure cable giant Comcast -- which also owns Universal and NBC -- was making the right move when it began offering mobile phone service back in 2017.

At least the latter of those companies has provided a glimmer of hope for the idea of melding two previously separated services, though.

Branded as an Xfinity service, Comcast now serves more than 2 million wireless customers following the launch of the service in the second quarter of 2017. Making the number even more impressive is that it's limited to Comcast's broadband customers. The reason for its success? It's a bundle those customers can live with in an environment in which the so-called triple-play bundle that groups cable TV, phone, and internet service has lost its appeal.

Consumers really don't need a home phone anymore, and there are enough cheap streaming alternatives to prompt some consumers to question the need for cable television. Underscoring this argument is the fact that while Comcast has lost cable customers just like Verizon and AT&T have, it's added mobile and broadband customers. 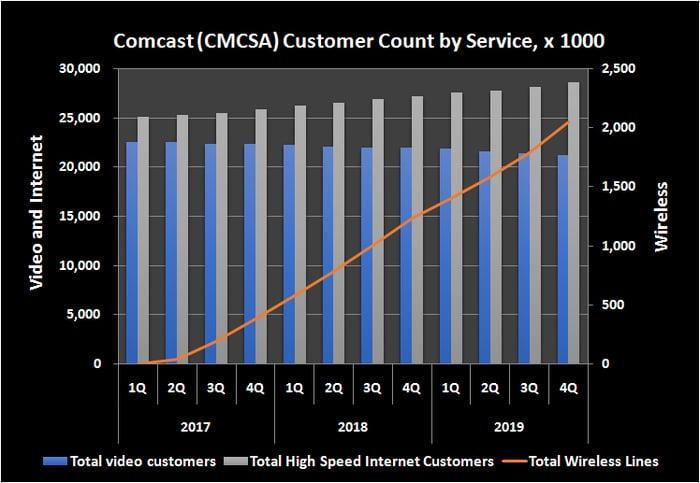 AT&T's bundling and rebundling efforts have been more difficult to measure, as pricing of its television services has generally been out of touch with what most consumers are willing to pay. The looming launch of WarnerMedia's streaming service called HBO Max late next month may fix the problem -- it looks like it's going to be a key bundling component as well. For instance, customers of some of AT&T's premium wireless and broadband services will be offered complimentary access to the HBO-branded service, as will all of its cable customers. The strategy may or may not work, but AT&T at least appears to be thinking about ways to leverage video content and telco services together. In the meantime, Comcast's rival streaming platform Peacock, scheduled for full commercial launch in July, is going to be free for Xfinity internet customers. 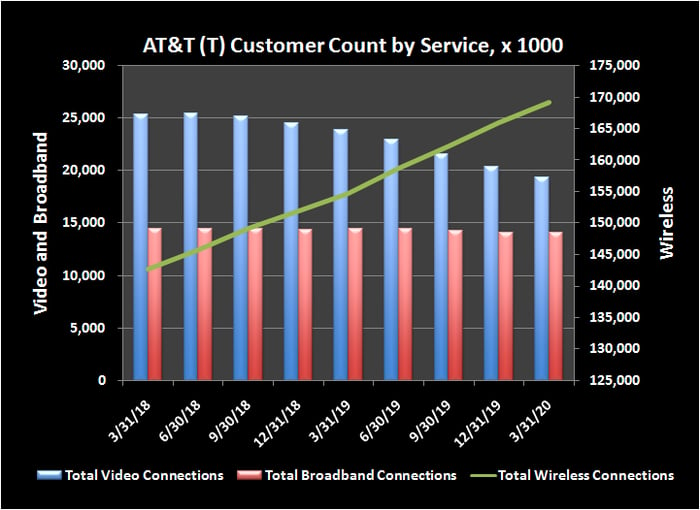 Verizon doesn't have any add-on offering -- particularly on the video realm -- of its own to tempt either existing customers or new ones.

Haunted by a lack of video exposure

That's not to say Verizon hasn't tried to wade into video waters in the past. Video was at least a noteworthy consideration with its 2017 acquisition of Yahoo!, since Yahoo! had ventured into digital video on its own. Yahoo! Screen launched in 2014, and Yahoo! won the rights to broadcast a couple of NFL games back in 2015. It also produced a handful of original web shorts before that. Verizon came up with a video service called go90 in 2015 on its own, aiming to make it an online video hub.

Both go90 and Yahoo! Screen are now defunct, though, with Verizon never really able to figure out how to make video work. Now Verizon's only notable video offerings outside of its fading conventional cable TV business are Disney+ and YouTube TV -- someone else's products (in this case, Disney and Alphabet, respectively) ultimately paid for by Verizon, and then just barely. New Verizon Wireless customers get one free year of the former or one month of the latter, after which they must start paying for themselves. Verizon's cable television customers can also access the same one free month of YouTube TV but then must pay for it on their own as well.

The lack of interest in Verizon's video services is evident in a streak of customer losses that appears to be accelerating. It's done reasonably well on the fiber-optic internet front, although that growth is slowing too. Not shown on the chart below are the company's more traditional broadband (DSL) service and voice customer counts, but they wouldn't help the bullish case. Its broadband growth is stagnating, while its voice business continues to shrink. 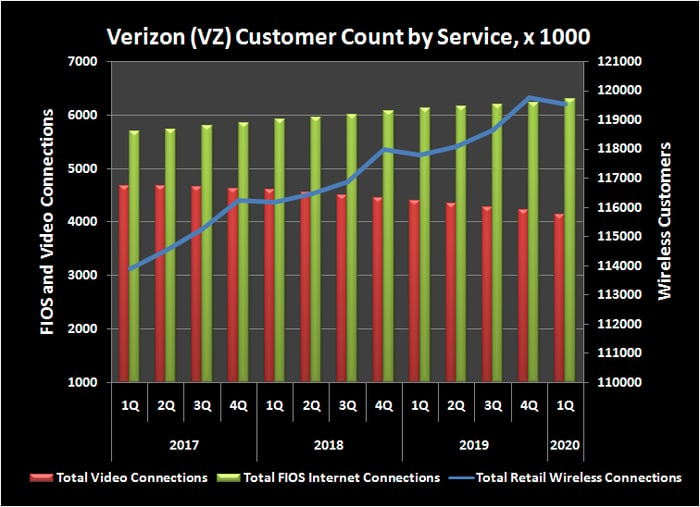 The only real growth engine Verizon has is wireless, which is a good one but does not carry infinite potential.

To be fair, consumers might be thinking about more than one thing when they decide to start or stop a service. Considering Comcast is offsetting cable customer losses with broadband and wireless customer additions while AT&T is at least curbing the tide of customer losses, however, Verizon's customer attrition makes it clear that something is amiss.

Fixing this is easier said than done. Video isn't cheap, and there are no guarantees of success. Entry into the streaming arena now would also mean Verizon is the least-entrenched newcomer unless it acquires its way into the market. Unfortunately, with Fox scooping up the last of the major independent AVOD (ad-supported video-on-demand) names when it acquired Tubi earlier this month, most prospective deals have already been done. Whatever Verizon needs to own in the way of video, it may have to figure out how to build it for itself -- no small task. There aren't many other options, though, unless the company has something wildly creative outside of the video space to bring to the table.