Please ensure Javascript is enabled for purposes of website accessibility
Log In Help Join The Motley Fool
Free Article Join Over 1 Million Premium Members And Get More In-Depth Stock Guidance and Research
By James Brumley - Mar 24, 2020 at 9:35AM

Investors who though the last few months were big ones for ad-supported video may want to buckle up, because the competition hasn't even really started yet.

Right now, the hottest slice of the streaming video market is the ad-supported segment, in contrast to purely subscription-based options like Netflix. And Fox Corp. (FOX 0.49%) (FOXA 0.39%) clearly knows it. Last week, the entertainment company -- which became a stand-alone entity a year ago after Walt Disney's (DIS -0.70%) mix-and-match acquisition of most of 21st Century Fox -- announced its $440 million purchase of commercial-supported video streamer Tubi.

That deal takes the last of the major independent ad-supported video on demand (AVOD) companies off the table; at this point, each of the major networks and studios has an ad-supported or ad-subsidized streaming service in its portfolio.

Now, let the games begin as they vie for dominance. 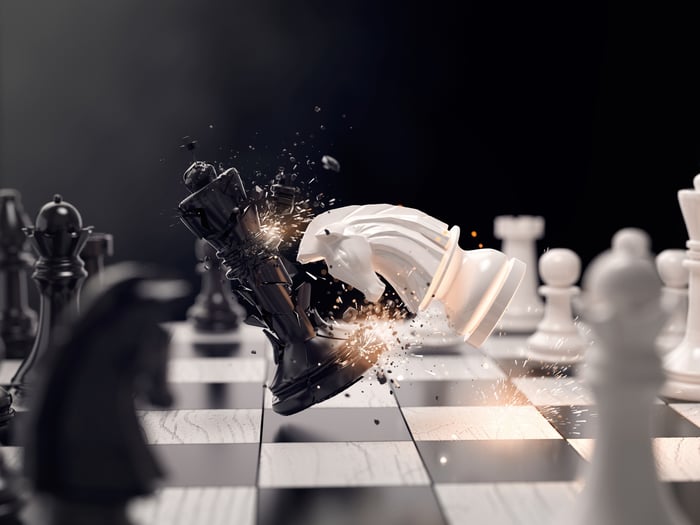 Ad-supported streaming has been around almost as long as streaming itself has, although mostly as an afterthought until January 2019. That's when Comcast (CMCSA -0.02%), noting the success of Tubi and Amazon's (AMZN 0.25%) ad-supported channel IMBDtv, announced it was planning its own ad-supported offering that would be a lot like classic broadcast television. The planned service would intersperse commercials into its content, and make it completely free for viewers willing to tolerate a few more of those ads than paying subscribers will see. It will even stream the same video content cable customers enjoy, although not quite in real-time.

Just a few days later, ViacomCBS (NASDAQ: VIAC) (VIAC.A 1.19%) -- when it was still just Viacom -- announced its acquisition of ad-supported video-streamer Pluto TV. That same day, Disney-owned Hulu lowered the monthly price of its ad-subsidized subscription. Last month, ViacomCBS revealed it would be launching an ad-supported, expanded version of its CBS All Access. Later in February, Comcast acquired Xumo, which offers free and subscription-based video entertainment.

It doesn't take a detective to spot the trend. Media companies want a piece of this growing niche, and they'll buy or build their way into it. Most are doing both.

For all the positioning that companies have been doing just since the beginning of last year, even more lies ahead. Comcast's Peacock, which will lean heavily on the properties of NBC and Universal, won't launch until July. Xumo and Tubi are both established AVOD operations, but both are new additions to parent companies that didn't build them, and Xumo will eventually have to compete with its homegrown rival, Peacock. Fox, meanwhile is at the beginning of its AVOD learning curve with Tubi, and ViacomCBS hasn't offered much clarity about when its ad-supported service might debut or what it will look like when it does.

All of these entities, however, are moving fast, and most may ultimately be positioning themselves to keep Peacock in check, fearing it could become the powerhouse within the ad-supported arena.

That concern would be well justified.

Describing Peacock as a first-of-its-kind service isn't hyperbole. Until now, networks and studios have had an interest in making their content relatively exclusive to one video venue. Disney, for instance, moved several of its Star Wars and Marvel films from previous partner Netflix to its new Disney+ streaming service.

Networks and studios aren't as hesitant to double-dip with their video content now though, particularly when they own all the mediums through which it's available. Comcast doesn't just own NBC and Universal. It's also a major cable provider, and it will soon be a streaming powerhouse able to offering tons of network and studio content. That makes Peacock a potent prospect, even more so considering that consumers who are starting to feel subscription-fee fatigue will be able to get it free.

That subscription-fee fatigue is real, too. Most U.S. households say they aren't willing to spend more than $40 per month on streaming subscriptions, and more than one-third of U.S. households say they wouldn't be willing to pay more than $20 per month. They are, however, remarkably open to watching a few commercials in exchange for free on-demand video. A recent poll taken by The Trade Desk and YouGov indicated more than half of all TV watchers were OK with watching ads in exchange for lower priced (or free) streaming video. The same survey also indicated that people would prefer those ads to be targeted so that they are relevant to them.

Like any close race, the most exciting moments come at the end, and this year should be the beginning of the final lap in the race among streaming names to establish AVOD supremacy. At stake is their shares of a revenue pool that Digital TV Research estimates will be worth $20 billion by 2024 in North America alone and $56 billion on a global basis.

Given that, look for the major players to pull out all the stops in 2020 to attract viewers and secure the widest foothold in the market they can manage. Competitive pricing and compelling content will be their weapons of choice, although bundling is likely to be a favored tactic too.

The odds-on favorite to win the race is still Comcast though, if only because it's so close to launching Peacock, and is so far ahead in the development of the advertising tools that commercial-buying companies will want in order to make airing their ads on these platforms worth their while.

Fox Corp Will Acquire Tubi to Enter the Streaming Wars