Please ensure Javascript is enabled for purposes of website accessibility
Log In Help Join The Motley Fool
Free Article Join Over 1 Million Premium Members And Get More In-Depth Stock Guidance and Research
By Jason Hall - Updated May 1, 2020 at 2:27PM

As earnings season gets fully underway, stocks are tumbling. Restaurants in particular are taking a beating as investors lose confidence in a quick recovery.

Sellers are driving stocks on May 1 as the earnings numbers start to roll in. At this writing, the SPDR S&P ETF Trust (SPY 1.06%) is down 2.9%, with restaurant stocks, particularly casual sit-down chains, taking a heavy beating.

As of 12:42 p.m. EDT on Friday, the following 10 restaurant stocks are having a particularly ugly day:

Today's selling ends what had been quite a week for sit-down casual restaurant stocks. From Monday through Wednesday, this group of stocks as a class absolutely crushed it, led by Brinker (owner of Chili's) and Dine Brands (IHOP and Applebee's parent), which gained more than 50% in those three days. And even the worst performer over that span, Texas Roadhouse, gained almost 9%: 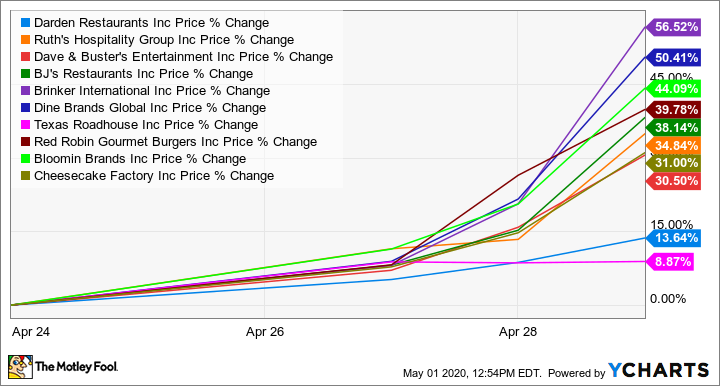 These restaurants, which count on people eating in their dining rooms, have been one of the hardest-hit groups of businesses under coronavirus lockdown policies. And investors this week looked to get back in early, as some states began the process of lifting restrictions.

Then earnings season started, and the gravity of how bad the financial damage could be for so many businesses started killing the rally. Dine Brands reported earnings on April 29, and didn't actually mention the company's financial performance until more than 500 words into the release, instead focusing on its cash position and the steps it was taking in this unprecedented environment. Management took a similar approach on the earnings call. 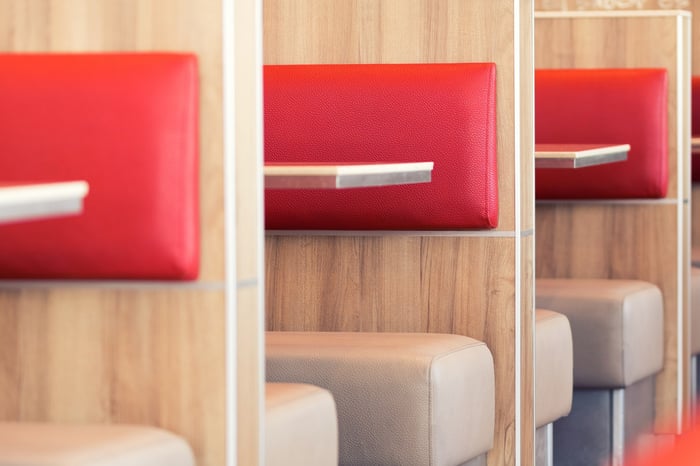 While none of these restaurants reported earnings today (or after trading Thursday evening), the sentiment has turned decidedly negative as we get further into earnings season and other retailing companies announce their results.

Additionally, it's likely that a lot of today's selling is the product of traders who've enjoyed the recent gains in restaurant stocks and are taking profits heading into the weekend.

A combination of weak earnings, profit-taking, and worries that the economic recovery could be slower than expected is sending these restaurant stocks lower today.

The good news is that, as a category, they've taken steps to shore up their balance sheets, and have increased their abilities to serve to-go and delivery orders. Darden, owner of the Olive Garden and LongHorn Steakhouse among other chains, said its to-go sales tripled early in the pandemic, while it also did a secondary stock offering to raise more cash.

Of the group, the one that could be in the most trouble is Dave & Buster's. More than any of the others, it counts on people visiting its restaurants, which are more of a bolt-on business attached to its game attractions (nobody goes for the food). It also has by far the weakest balance sheet and is at risk of running out of cash quickly.

Even after a tumultuous week that's seen these restaurant stocks gain tremendously (including today's sell-off), they are still down far more than the market overall, ranging from 21% off for Texas Roadhouse to a 67% sell-off for Dave & Buster's.

Chances are, the coming quarter is going to remain very painful. The social restrictions to limit the spread of COVID-19 have resulted in some 30 million Americans losing their jobs (many of them restaurant and retail workers), and what economist say will prove to be the deepest, fastest drop into a recession in U.S. history.

Even once the restrictions come off, it's going to take some time for the economy to recover. Moreover, it's very likely that without proven treatments or a vaccine in place, millions of potential customers who normally frequent these chains won't be going out to eat.

And that is going to limit just how much (and how soon) traffic at sit-down restaurants returns to normal.