On Thursday, April 30, oil major Royal Dutch Shell (NYSE:RDS.A)(NYSE:RDS.B), which had been a best-in-class dividend stock for a decade, reported Q1 2020 earnings, stunning Wall Street by announcing it was slashing its dividend by two-thirds. The news caused shares to tumble 12.5% in morning trading, and overshadowed what was otherwise a better-than-expected Q1 2020 earnings report.

Obviously, investors need to reevaluate Shell, but let's consider the whole earnings report and not just the dividend disappointment. Here's what happened this quarter and what it means for Shell moving forward. 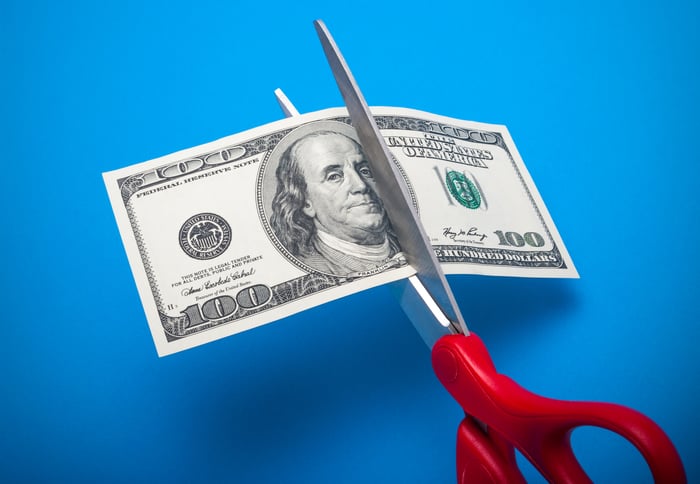 Yes, the numbers were mostly bad, with the exception of the impressive growth in operating cash flow. But considering the current global economic situation in general and the state of the oil industry in particular, Shell's adjusted net income of $2.8 billion was actually better than expected. Analysts were anticipating just $2.25 billion.

The adjusted figures are so much better because they're calculated on a "Current Cost of Supplies" basis. This strips out the effect of changes in prices on existing inventory. In other words, Shell reported a net loss as opposed to a net profit due to oil prices being lower at the end of the quarter than at the beginning, which reduced the value of Shell's inventory.

Yeah, yeah, but what about the dividend cut

The quarterly dividend cut -- the company's first since World War II -- overshadowed everything else. It went from $0.94/ADR share to $0.32/ADR share (ADR shares are essentially the equivalent of two ordinary shares). At the current price of about $33/ADR share, that represents a current post-cut yield of roughly 3.9%, down from a double-digit percentage. Shell's  yield is now the lowest among the five integrated oil majors as opposed to the highest. i

The cut came as something of a surprise, given that all four of Shell's fellow majors -- ExxonMobil, Chevron, BP, and Total -- had all announced they would maintained their dividends, and Shell's debt-to-EBITDA ratio s much lower than either BP's or Total's.

All five, including Shell, had also cut their 2020 capital spending budgets by between 20% and 30%. Those that were pursuing share buybacks, including Shell, announced they would be suspended. It was widely considered that these cash-preserving moves would sustain dividend payouts for the foreseeable future.

Still, the move wasn't entirely unprecedented. Norway's integrated oil and gas company, Equinor, which has a market cap about one-third the size of Shell's, also cut its dividend by two-thirds on April 24. Many oil and gas production companies have cut or suspended their dividends outright.

Explaining the dividend cut in a statement, CEO Ben Van Beurden cited "the continued deterioration in the macroeconomic outlook and the significant mid- and long-term uncertainty." He also expressed a desire to "bolster our resilience, underpin the strength of our balance sheet and support the long-term value creation of Shell."

It's hard to fault Van Beurden for wanting to ensure the company's financial health. Maintaining the dividend would almost certainly have involved taking on additional debt, possibly diluting shareholder value through a scrip dividend program like the company offered during the oil price downturn of 2014-2017, and depleting the company's $21.8 billion cash pile.

In a separate statement, Board Chairman Chad Holliday added that "given the risk of a prolonged period of economic uncertainty, weaker commodity prices, higher volatility and uncertain demand outlook, the Board believes that maintaining the [2019] level of shareholder distributions is not prudent."

In other words, Shell isn't anticipating a quick return to normal, but a long, difficult slog, and rather than risk racking up a lot of debt only to cut the dividend down the line, its board opted to yank off the bandage right out of the gate. Time will tell if this was a premature decision, but prioritizing balance sheet strength over dividend payments is almost never going to be a poor decision for the long-term health of the company.

Due to the uncertain economic conditions caused by COVID-19, Shell didn't provide full-year volume guidance for 2020. It did release some Q2 projections, but even those were loaded with caveats that they were "based on current expectations" and "subject to change."

Unsurprisingly, everything's expected to be down. The midpoints of Shell's projected ranges call for a 9.4% decline in gas production, a 26.2% drop in upstream production, a 33.7% decline in oil products sales, and a 19.8% decline in refinery utilization. Bucking the trend, Shell's chemical sales are projected to be roughly flat, between a 9.5% decrease and a 5.9% increase. However, chemical sales represent just 3.8% of total earnings, so it's not much of a silver lining.

For investors wondering if they should buy in now that shares are trading at a 25-year low, Shell could be a compelling long-term investment. Management is clearly committed to the company's long-term fiscal health, and seems unlikely to make further dividend cuts anytime soon. Meanwhile, Shell will now have the resources to potentially acquire valuable assets on the cheap, much like it did when it bought British gas giant BG Group in 2016.

To be clear, the oil industry is volatile and uncertain right now, so most investors should probably avoid it. But for risk-tolerant investors looking for long-term buys, there's a case to be made for Shell.