Please ensure Javascript is enabled for purposes of website accessibility
Log In Help Join The Motley Fool
Free Article Join Over 1 Million Premium Members And Get More In-Depth Stock Guidance and Research
By Rich Smith – May 3, 2020 at 12:33PM

How much is a contract to deliver supplies to an imaginary space station worth?

NASA's award of $1 billion in contracts to Blue Origin, Dynetics, and SpaceX to build landers to carry astronauts back to the moon is dominating headlines this week -- and don't get me wrong, this is a really big deal. But it pales in comparison to another NASA contract that SpaceX won just a little over a month ago.

That contract, to provide logistics services to a planned Lunar Gateway space station orbiting the moon, could be worth as much as $7 billion -- and SpaceX might not have to share it with anyone. 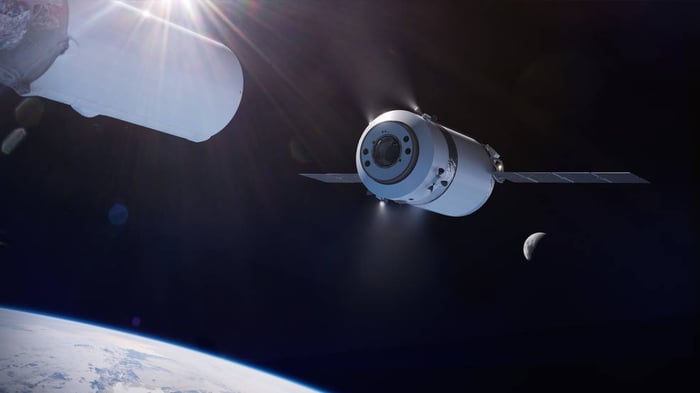 SpaceX has a contract to send supplies to a lunar space station -- but will there be a space station there to receive them? Image source: SpaceX.

As NASA described the larger contract award back in March, SpaceX will be hired to "deliver critical pressurized and unpressurized cargo, science experiments and supplies to the Gateway." Once delivered, these supplies would be stored at the space station for resupply to astronauts exploring the lunar surface. By bringing a supply depot closer to the astronauts' place of work, the Gateway should be able to support longer-duration exploration of the moon, enabling astronauts visiting Earth's satellite to stay there longer.

SpaceX's supply runs will include "multiple supply missions" over a term of somewhere between 12 and 15 years. Other companies may receive similar contracts, and according to NASA, the "maximum total value ... across all contracts" could add up to $7 billion over the entire performance term. But with SpaceX currently the only contractor named to perform the service, there seems to be a very real chance that SpaceX alone could end up collecting the entire $7 billion.

You see, there's just one problem with the contract that NASA awarded SpaceX on March 27. It centers on what NASA Associate Administrator for Human Exploration and Operations Doug Loverro had said about the moon mission two weeks prior to the contract award.

Specifically, in discussions with NASA Advisory Council's science committee on March 13, Loverro appeared to be less than enthusiastic about the idea of using a Lunar Gateway. Highlighting the difficulty of meeting Vice President Pence's mandate to land astronauts on the moon by 2024, Loverro said the best way to make that happen is to "remove all the things that add to program risk along the way." One such "thing" is the Lunar Gateway itself.

There is a "high possibility," explained Loverro, that NASA won't be able to complete construction of the space station in time for astronauts to use it as a base from which to descend to, and ascend from, the moon in 2024. Moreover, "from a physics perspective," said Loverro, "I can guarantee you we do not need it for this launch." (He's also not particularly enamored of NASA's original plan "to launch a lander in three individual pieces that have to meet up at" an orbiting space station before making their final approach to the moon.)

Simply put, it's simpler and thus less risky to send astronauts straight from Earth to the moon and back than to have them make pit stops at an orbiting space station en route. Indeed, the Starship spaceship that SpaceX is building in Texas is expressly designed to make such direct flights possible, and intermediate steps such as the Gateway unnecessary.

SpaceX isn't the only company that could lose out

Perversely, this means that if SpaceX's Starship is eventually chosen as the spaceship that takes astronauts back to the moon, it could make the Lunar Gateway -- and $7 billion worth of "logistics services" contracts to supply the Lunar Gateway -- unnecessary. There's a very real possibility that in building Starship, SpaceX could be working itself out of a $7 billion job!

If that were to happen -- if Lunar Gateway gets deemed unnecessary and never built -- it wouldn't just be bad news for SpaceX, either. Other space contractors, including those hired by NASA's international partners and also America's own Maxar Technologies and Northrop Grumman, both of which have been awarded contracts to build elements of the Lunar Gateway, could lose out as well.

Arguments for and against

Then again, with many companies in addition to SpaceX having vested interests (and valuable contracts) in the Lunar Gateway, NASA could end up building the thing anyway. Maybe not in time to facilitate the actual first trip by astronauts (back) to the moon, but later on -- because even after the astronauts arrive, the arguments in favor of establishing an orbital supply depot might still have merit.

In that regard, Loverro noted that he thinks the Lunar Gateway would help make lunar exploration missions "sustainable," and so he believes "100% positively it will be" built eventually if this can be done at a reasonable cost. But even so, this leaves open the possibility that a budget-conscious NASA may end up deciding the cost is not reasonable ... especially if SpaceX succeeds in building a spaceship that makes space stations irrelevant.

If you ask me, once that first spaceship bypasses a space station to touch down on the moon independently, a lot of folks (in NASA, and certainly in Congress) are going to start wondering whether spending extra billions to build a Lunar Gateway might be an unnecessary extravagance.

At that point, the clock will start ticking on Lunar Gateway -- and all the contracts tied to it -- going away forever.