Please ensure Javascript is enabled for purposes of website accessibility
Log In Help Join The Motley Fool
Free Article Join Over 1 Million Premium Members And Get More In-Depth Stock Guidance and Research
By John Rosevear – Updated May 4, 2020 at 3:48PM

Ferrari (RACE -0.76%) reported solid first-quarter earnings despite the impact of the coronavirus outbreak, but warned that the current quarter is shaping up to be a difficult one, and it cut its profit forecast for the full year.

Ferrari's first-quarter operating profit of 220 million euros ($241.4 million) was down 5% from a year ago, as an increase in deliveries failed to offset the loss of much of the income generated by its Formula 1 racing team after races were canceled.

Ferrari records revenue for three business units, plus a catch-all category it calls "other." A quick look at the results tells much of the story of Ferrari's first quarter.

So Ferrari's car business did well, but not quite well enough to offset lost revenue from canceled races and lower Maserati production. Its 5% decline in EBIT reflects that lost revenue, as well as a less-favorable mix of road cars sold than in the first quarter of 2019. 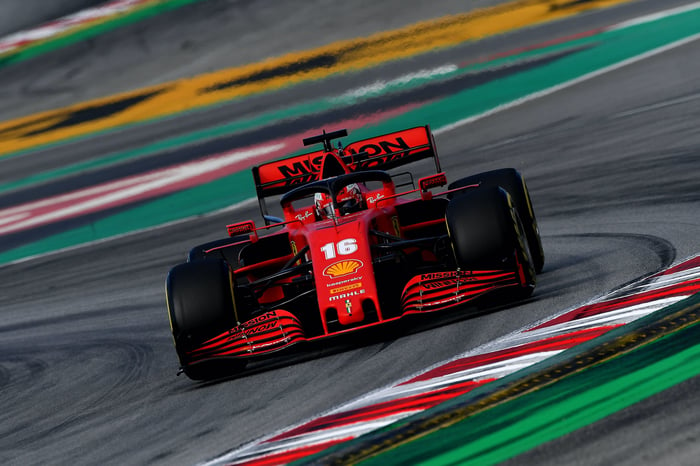 The suspension of Formula 1 racing hurt Ferrari's first-quarter revenue, and will weigh as the year goes on. Image source: Ferrari.

After a week of preparation to ensure worker safety, Ferrari reopened both of its factories on May 4. The company said that most of its suppliers also restarted production on May 4, and that it had accumulated larger-than-normal inventories of parts to allow suppliers some leeway.

Ferrari shut down its two factories in mid-March; both are located in the region of northern Italy that was hit especially hard by the pandemic.

During the earnings call, CEO Louis Camilleri said that Ferrari's order book remains robust, with only a few cancellations so far. He noted, however, that during the 2008-2009 economic crisis, it was several months before cancellations reached the point of affecting Ferrari's production plans.

Maintaining a robust order book (its waiting list is typically 12 to 18 months) is key to Ferrari's business plan, which emphasizes exclusivity to protect pricing power and margins.

Ferrari expects the second quarter of 2020 to be a rough one, with recovery (for its business, if not the larger world) in the second half of the year. But recovery or not, it expects its revenue from Formula 1 racing to be sharply lower than in 2019.

(Formula 1 currently plans to run a shortened season, starting in July, but those plans could change. In addition, some races may be run without spectators, which would reduce the revenue paid to teams including Ferrari.)

Here's what Ferrari is currently telling auto investors to expect for 2020, with ranges given due to the ongoing uncertainties:

John Rosevear has no position in any of the stocks mentioned. The Motley Fool recommends the following options: long December 2021 $130 calls on Ferrari. The Motley Fool has a disclosure policy.