Please ensure Javascript is enabled for purposes of website accessibility
Log In Help Join The Motley Fool
Free Article Join Over 1 Million Premium Members And Get More In-Depth Stock Guidance and Research
By John Rosevear - Updated May 6, 2020 at 1:04PM

A surprise first-quarter profit and news about reopening factories put investors in a good mood.

Shares of General Motors (GM 0.27%) were moving higher on Wednesday after GM reported a first-quarter profit that beat estimates and said it will reopen some of its factories in the U.S. and Canada on May 18.

GM reported earnings before the market opened on Wednesday, and under the circumstances they were quite good. In a quarter in which both of its Detroit rivals reported losses, GM had net income of $294 million -- or $0.62 per share on an adjusted basis. 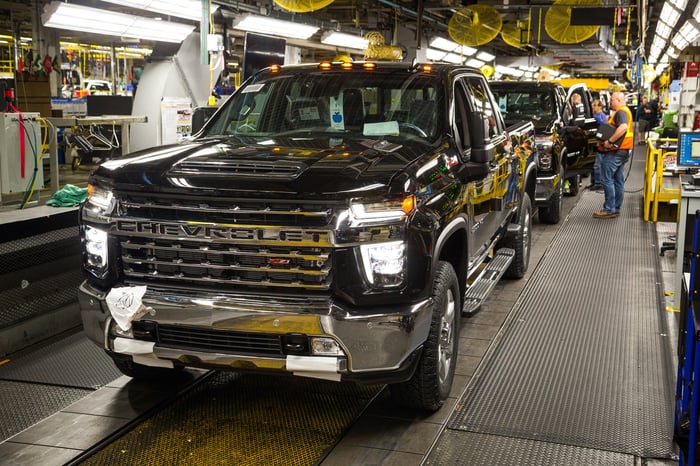 GM plans to reopen some of its factories in the U.S. and Canada on May 18, starting with its pickup-truck plants. Image source: General Motors.

GM credited much of the profit to its new pickup trucks, which were selling very well before the COVID-19 outbreak shut down much of the United States. (The company said they continued to sell quite well in April, too.)

In further good news, GM investors who were worried about cash burn can now rest a bit easier. CFO Dhivya Suryadevara said that the company has enough cash to keep operations (including future-product efforts) going well into the fourth quarter, even if it can't restart its factories outside of China. She also noted that the capital markets remain open to GM should it choose to raise extra cash to pad its balance sheet.

Auto investors were also glad to hear that GM will reopen some of its factories in the U.S. and Canada on May 18. It will start with one shift per day, working under extensive new safety protocols and prioritizing production of -- you guessed it -- pickups, as well as GM's new full-size SUVs.

Suryadevara said that GM will update its full-year guidance later on, after it gets a read on demand for new vehicles once the U.S. and Canada reopen.